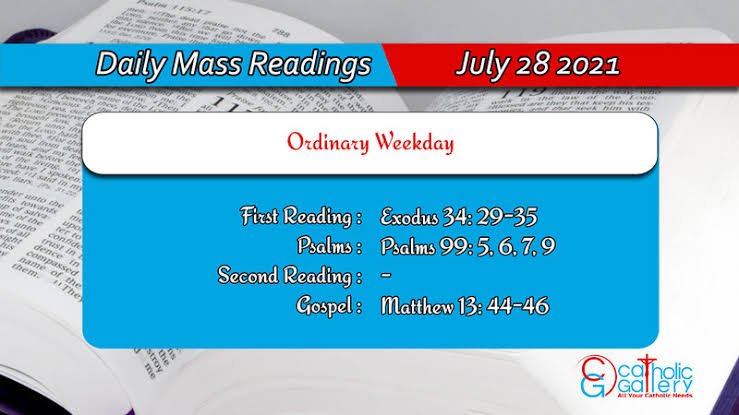 First Reading: Exodus 34: 29-35
29 And when Moses came down from the mount Sinai, he held the two tables of the testimony, and he knew not that his face was horned from the conversation of the Lord.

30 And Aaron and the children of Israel seeing the face of Moses horned, were afraid to come near.

31 And being called by him, they returned, both Aaron and the rulers of the congregation. And after that he spoke to them.

32 And all the children of Israel came to him: and he gave them in commandment all that he had heard of the Lord in mount Sinai.

33 And having done speaking, he put a veil upon his face.

34 But when he went in to the Lord, and spoke with him, he took it away until he came forth, and then he spoke to the children of Israel all things that had been commanded him.

35 And they saw that the face of Moses when he came out was horned, but he covered his face again, if at any time he spoke to them.

5 Exalt ye the Lord our God, and adore his footstool, for it is holy.

6 Moses and Aaron among his priests: and Samuel among them that call upon his name. They called upon the Lord, and he heard them:

7 He spoke to them in the pillar of the cloud. They kept his testimonies, and the commandment which he gave them.

15b I call you my friends, says the Lord, for I have made known to you all that the Father has told me.

Gospel: Matthew 13: 44-46
44 The kingdom of heaven is like unto a treasure hidden in a field. Which a man having found, hid it, and for joy thereof goeth, and selleth all that he hath, and buyeth that field.

45 Again the kingdom of heaven is like to a merchant seeking good pearls.

46 Who when he had found one pearl of great price, went his way, and sold all that he had, and bought it.

BBNaija 2021: I don’t know how to approach woman – WhiteMoney
Next Article

4 hours ago
@nssidd0 @nihangraphics @EnvatoStudio Hi there, we would be more than willing to review this case for you. Please s… https://t.co/k6Iq9QpBZs

18 hours ago
@jinson_dev Hi there, thank you for letting us know about this. We are investigating this. Regards,

21 hours ago
@click2swapnil Thank you for reaching out. I am more than happy to answer any general questions here. However, your… https://t.co/8FOZa7Ok8f