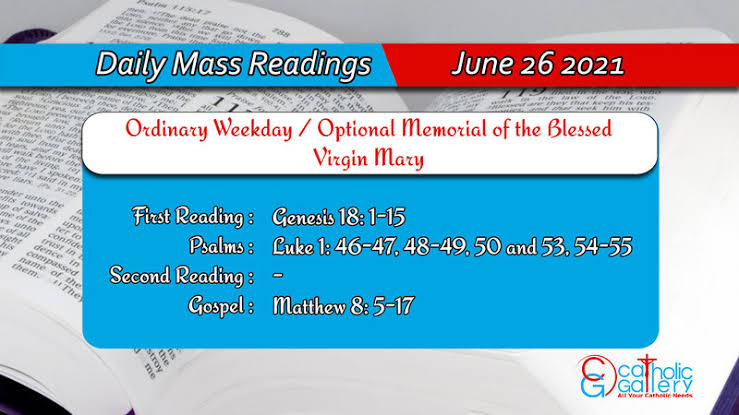 First Reading: Genesis 18:1-15
1 And the Lord appeared to him in the vale of Mambre as he was sitting at the door of his tent, in the very heat of the day.

2 And when he had lifted up his eyes, there appeared to him three men standing near him: and as soon as he saw them he ran to meet them from the door of his tent, and adored down to the ground.

3 And he said: Lord, if I have found favour in thy sight, pass not away from thy servant:

4 But I will fetch a little water, and wash ye your feet, and rest ye under the tree.

5 And I will set a morsel of bread, and strengthen ye your heart, afterwards you shall pass on: for therefore are you come aside to your servant. And they said: Do as thou hast spoken.

6 Abraham made haste into the tent to Sara, and said to her: Make haste, temper together three measures of flour, and make cakes upon the hearth.

7 And he himself ran to the herd, and took from thence a calf very tender and very good, and gave it to a young man: who made haste and boiled it.

8 He took also butter and milk, and the calf which he had boiled, and set before them: but he stood by them under the tree.

9 And when they had eaten, they said to him: Where is Sara thy wife? He answered: Lo, she is in the tent.

10 And he said to him: I will return and come to thee at this time, life accompanying and Sara thy wife shall have a son. Which when Sara heard, she laughed behind the door of the tent.

11 Now they were both old, and far advanced in years, and it had ceased to be with Sara after the manner of women.

12 And she laughed secretly, saying: After I am grown old and my lord is an old man, shall I give myself to pleasure?

13 And the Lord said to Abraham: Why did Sara laugh, saying: Shall I who am an old woman bear a child indeed?

14 Is there any thing hard to God? According to appointment I will return to thee at this same time, life accompanying, and Sara shall have a son.

15 Sara denied, saying: I did not laugh: for she was afraid. But the Lord said, Nay: but thou didst laugh:

46 And Mary said: My soul doth magnify the Lord.

47 And my spirit hath rejoiced in God my Saviour.

48 Because he hath regarded the humility of his handmaid; for behold from henceforth all generations shall call me blessed.

49 Because he that is mighty, hath done great things to me; and holy is his name.

50 And his mercy is from generation unto generations, to them that fear him.

53 He hath filled the hungry with good things; and the rich he hath sent empty away.

54 He hath received Israel his servant, being mindful of his mercy:

55 As he spoke to our fathers, to Abraham and to his seed for ever.

17 Christ took away our infirmities and bore our diseases.

Gospel: Matthew 8:5-17
5 And when he had entered into Capharnaum, there came to him a centurion, beseeching him,

6 And saying, Lord, my servant lieth at home sick of the palsy, and is grieviously tormented.

7 And Jesus saith to him: I will come and heal him.

8 And the centurion making answer, said: Lord, I am not worthy that thou shouldst enter under my roof: but only say the word, and my servant shall be healed.

9 For I also am a man subject to authority, having under me soldiers; and I say to this, Go, and he goeth, and to another, Come, and he cometh, and to my servant, Do this, and he doeth it.

10 And Jesus hearing this, marvelled; and said to them that followed him: Amen I say to you, I have not found so great faith in Israel.

11 And I say to you that many shall come from the east and the west, and shall sit down with Abraham, and Isaac, and Jacob in the kingdom of heaven:

12 But the children of the kingdom shall be cast out into the exterior darkness: there shall be weeping and gnashing of teeth.

13 And Jesus said to the centurion: Go, and as thou hast believed, so be it done to thee. And the servant was healed at the same hour.

14 And when Jesus was come into Peter’s house, he saw his wife’s mother lying, and sick of a fever:

15 And he touched her hand, and the fever left her, and she arose and ministered to them.

16 And when evening was come, they brought to him many that were possessed with devils: and he cast out the spirits with his word: and all that were sick he healed:

17 That it might be fulfilled, which was spoken by the prophet Isaias, saying: He took our infirmities, and bore our diseases.