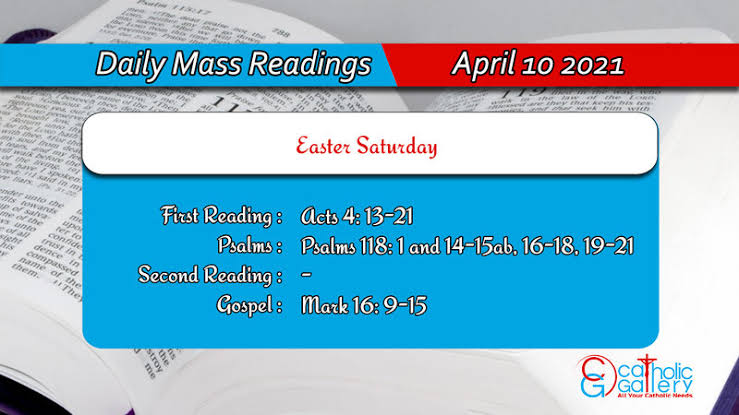 First Reading: Acts 4: 13-21
13 Now seeing the constancy of Peter and of John, understanding that they were illiterate and ignorant men, they wondered; and they knew them that they had been with Jesus.

14 Seeing the man also who had been healed standing with them, they could say nothing against it.

15 But they commanded them to go aside out of the council; and they conferred among themselves,

16 Saying: What shall we do to these men? for indeed a known miracle hath been done by them, to all the inhabitants of Jerusalem: it is manifest, and we cannot deny it.

17 But that it may be no farther spread among the people, let us threaten them that they speak no more in this name to any man.

18 And calling them, they charged them not to speak at all, nor teach in the name of Jesus.

19 But Peter and John answering, said to them: If it be just in the sight of God, to hear you rather than God, judge ye.

20 For we cannot but speak the things which we have seen and heard.

21 But they threatening, sent them away, not finding how they might punish them, because of the people; for all men glorified what had been done, in that which had come to pass.

1 Give praise to Lord, for he is good: for his mercy endureth for ever.

14 The Lord is my strength and my praise: and he is become my salvation.

15 The voice of rejoicing and of salvation is in the tabernacles of the just.

17 I shall not die, but live: and shall declare the works of the Lord.

18 The Lord chastising hath chastised me: but he hath not delivered me over to death.

19 Open ye to me the gates of justice: I will go into them, and give praise to the Lord.

20 This is the gate of the Lord, the just shall enter into it.

21 I will give glory to thee because thou hast heard me: and art become my salvation.

24 This is the day which the Lord hath made: let us be glad and rejoice therein.

Gospel: Mark 16:9-15
9 But he rising early the first day of the week, appeared first to Mary Magdalen, out of whom he had cast seven devils.

10 She went and told them that had been with him, who were mourning and weeping.

11 And they hearing that he was alive, and had been seen by her, did not believe.

12 And after that he appeared in another shape to two of them walking, as they were going into the country.

13 And they going told it to the rest: neither did they believe them.

14 At length he appeared to the eleven as they were at table: and he upbraided them with their incredulity and hardness of heart, because they did not believe them who had seen him after he was risen again.

15 And he said to them: Go ye into the whole world, and preach the gospel to every creature.