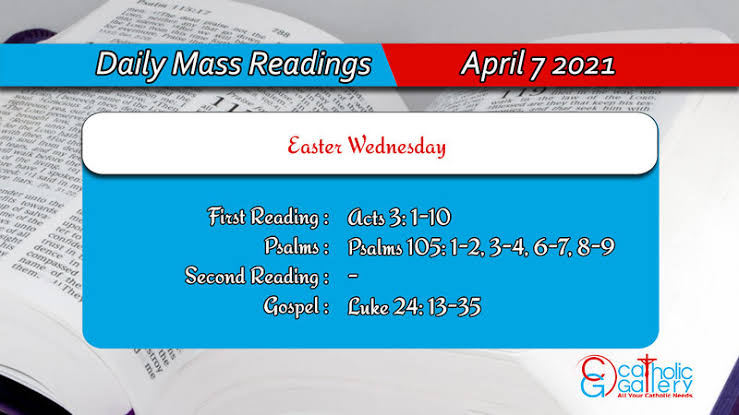 First Reading: Acts 3: 1-10
1 Now Peter and John went up into the temple at the ninth hour of prayer.

2 And a certain man who was lame from his mother’s womb, was carried: whom they laid every day at the gate of the temple, which is called Beautiful, that he might ask alms of them that went into the temple.

3 He, when he had seen Peter and John about to go into the temple, asked to receive an alms.

4 But Peter with John fastening his eyes upon him, said: Look upon us.

5 But he looked earnestly upon them, hoping that he should receive something of them.

6 But Peter said: Silver and gold I have none; but what I have, I give thee: In the name of Jesus Christ of Nazareth, arise, and walk.

7 And taking him by the right hand, he lifted him up, and forthwith his feet and soles received strength.

8 And he leaping up, stood, and walked, and went in with them into the temple, walking, and leaping, and praising God.

9 And all the people saw him walking and praising God.

10 And they knew him, that it was he who sat begging alms at the Beautiful gate of the temple: and they were filled with wonder and amazement at that which had happened to him.

1 Alleluia. Give glory to the Lord, and call upon his name: declare his deeds among the Gentiles.

2 Sing to him, yea sing praises to him: relate all his wondrous works.

3 Glory ye in his holy name: let the heart of them rejoice that seek the Lord.

4 Seek ye the Lord, and be strengthened: seek his face evermore.

6 O ye seed of Abraham his servant; ye sons of Jacob his chosen.

7 He is the Lord our God: his judgments are in all the earth.

8 He hath remembered his covenant for ever: the word which he commanded to a thousand generations.

9 Which he made to Abraham; and his oath to Isaac:

24 This is the day which the Lord hath made: let us be glad and rejoice therein.

Gospel: Luke 24:13-35
13 And behold, two of them went, the same day, to a town which was sixty furlongs from Jerusalem, named Emmaus.

14 And they talked together of all these things which had happened.

15 And it came to pass, that while they talked and reasoned with themselves, Jesus himself also drawing near, went with them.

16 But their eyes were held, that they should not know him.

17 And he said to them: What are these discourses that you hold one with another as you walk, and are sad?

18 And the one of them, whose name was Cleophas, answering, said to him: Art thou only a stranger to Jerusalem, and hast not known the things that have been done there in these days?

19 To whom he said: What things? And they said: Concerning Jesus of Nazareth, who was a prophet, mighty in work and word before God and all the people;

20 And how our chief priests and princes delivered him to be condemned to death, and crucified him.

21 But we hoped, that it was he that should have redeemed Israel: and now besides all this, today is the third day since these things were done.

22 Yea and certain women also of our company affrighted us, who before it was light, were at the sepulchre,

23 And not finding his body, came, saying, that they had also seen a vision of angels, who say that he is alive.

24 And some of our people went to the sepulchre, and found it so as the women had said, but him they found not.

25 Then he said to them: O foolish, and slow of heart to believe in all things which the prophets have spoken.

26 Ought not Christ to have suffered these things, and so to enter into his glory?

27 And beginning at Moses and all the prophets, he expounded to them in all the scriptures, the things that were concerning him.

28 And they drew nigh to the town, whither they were going: and he made as though he would go farther.

29 But they constrained him; saying: Stay with us, because it is towards evening, and the day is now far spent. And he went in with them.

30 And it came to pass, whilst he was at table with them, he took bread, and blessed, and brake, and gave to them.

31 And their eyes were opened, and they knew him: and he vanished out of their sight.

32 And they said one to the other: Was not our heart burning within us, whilst he spoke in this way, and opened to us the scriptures?

33 And rising up, the same hour, they went back to Jerusalem: and they found the eleven gathered together, and those that were staying with them,

34 Saying: The Lord is risen indeed, and hath appeared to Simon.

35 And they told what things were done in the way; and how they knew him in the breaking of the bread.

Our Daily Bread 7th April 2021 Devotional – Through Thick And Thin