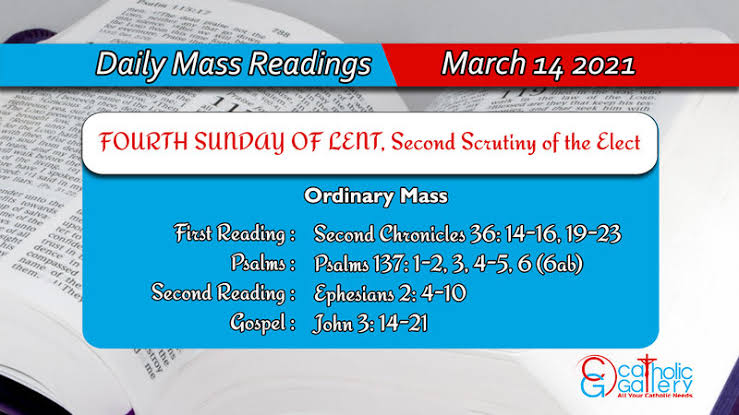 You are reading Today’s Catholic Daily Mass Reading Online for Sunday 14th March 2021. May you be blessed as you read on.

First Reading: First Samuel 16: 1b, 6-7, 10-13a
1 And the Lord said to Samuel: fill thy horn with oil, and come, that I may send thee to Isai the Bethlehemite: for I have provided me a king among his sons.

6 And when they were come in, he saw Eliab, and said: Is the Lord’s anointed before him?

7 And the Lord said to Samuel: Look not on his countenance, nor on the height of his stature: because I have rejected him, nor do I judge according to the look of man: for man seeth those things that appear, but the Lord beholdeth the heart.

10 Isai therefore brought his seven sons before Samuel: and Samuel said to Isai: The Lord hath not chosen any one of these.

12 He sent therefore and brought him Now he was ruddy and beautiful to behold, and of a comely face. And the Lord said: Arise, and anoint him, for this is he.

13 Then Samuel took the horn of oil, and anointed him in the midst of his brethren: and the spirit of the Lord came upon David from that day forward.

1 A psalm for David. The Lord ruleth me: and I shall want nothing.

2 He hath set me in a place of pasture. He hath brought me up, on the water of refreshment:

3 He hath converted my soul.

3 He hath led me on the paths of justice, for his own name’s sake.

4 For though I should walk in the midst of the shadow of death, I will fear no evils, for thou art with me. Thy rod and thy staff, they have comforted me.

5 Thou hast prepared a table before me against them that afflict me. Thou hast anointed my head with oil; and my chalice which inebriateth me, how goodly is it!

6 And thy mercy will follow me all the days of my life. And that I may dwell in the house of the Lord unto length of days.

Second Reading: Ephesians 5: 8-14
8 For you were heretofore darkness, but now light in the Lord. Walk then as children of the light.

9 For the fruit of the light is in all goodness, and justice, and truth;

10 Proving what is well pleasing to God:

11 And have no fellowship with the unfruitful works of darkness, but rather reprove them.

12 For the things that are done by them in secret, it is a shame even to speak of.

14 Wherefore he saith: Rise thou that sleepest, and arise from the dead: and Christ shall enlighten thee.

Verse Before the Gospel: John 8: 12
12 I am the light of the world: he that followeth me, walketh not in darkness, but shall have the light of life.

2 And his disciples asked him: Rabbi, who hath sinned, this man, or his parents, that he should be born blind?

3 Jesus answered: Neither hath this man sinned, nor his parents; but that the works of God should be made manifest in him.

4 I must work the works of him that sent me, whilst it is day: the night cometh, when no man can work.

5 As long as I am in the world, I am the light of the world.

6 When he had said these things, he spat on the ground, and made clay of the spittle, and spread the clay on his eyes,

7 And said to him: Go, wash in the pool of Siloe, which is interpreted, Sent. He went therefore, and washed, and he came seeing.

8 The neighbours therefore, and they who had seen him before that he was a beggar, said: Is not this he that sat and begged? Some said: This is he.

10 They said therefore to him: How were thy eyes opened?

11 He answered: That man that is called Jesus made clay, and anointed my eyes, and said to me: Go to the pool of Siloe, and wash. And I went, I washed, and I see.

13 They bring him that had been blind to the Pharisees.

14 Now it was the sabbath, when Jesus made the clay, and opened his eyes.

15 Again therefore the Pharisees asked him, how he had received his sight. But he said to them: He put clay upon my eyes, and I washed, and I see.

16 Some therefore of the Pharisees said: This man is not of God, who keepeth not the sabbath. But others said: How can a man that is a sinner do such miracles? And there was a division among them.

17 They say therefore to the blind man again: What sayest thou of him that hath opened thy eyes? And he said: He is a prophet.

19 And asked them, saying: Is this your son, who you say was born blind? How then doth he now see?

20 His parents answered them, and said: We know that this is our son, and that he was born blind:

21 But how he now seeth, we know not; or who hath opened his eyes, we know not: ask himself: he is of age, let him speak for himself.

22 These things his parents said, because they feared the Jews: for the Jews had already agreed among themselves, that if any man should confess him to be Christ, he should be put out of the synagogue.

23 Therefore did his parents say: He is of age, ask himself.

24 They therefore called the man again that had been blind, and said to him: Give glory to God. We know that this man is a sinner.

25 He said therefore to them: If he be a sinner, I know not: one thing I know, that whereas I was blind, now I see.

26 They said then to him: What did he to thee? How did he open thy eyes?

27 He answered them: I have told you already, and you have heard: why would you hear it again? will you also become his disciples?

28 They reviled him therefore, and said: Be thou his disciple; but we are the disciples of Moses.

29 We know that God spoke to Moses: but as to this man, we know not from whence he is.

30 The man answered, and said to them: Why, herein is a wonderful thing, that you know not from whence he is, and he hath opened my eyes.

31 Now we know that God doth not hear sinners: but if a man be a server of God, and doth his will, him he heareth.

32 From the beginning of the world it hath not been heard, that any man hath opened the eyes of one born blind.

33 Unless this man were of God, he could not do any thing.

34 They answered, and said to him: Thou wast wholly born in sins, and dost thou teach us? And they cast him out.

35 Jesus heard that they had cast him out: and when he had found him, he said to him: Dost thou believe in the Son of God?

37 And Jesus said to him: Thou hast both seen him; and it is he that talketh with thee.

38 And he said: I believe, Lord. And falling down, he adored him.

39 And Jesus said: For judgment I am come into this world; that they who see not, may see; and they who see, may become blind.

40 And some of the Pharisees, who were with him, heard: and they said unto him: Are we also blind?

41 Jesus said to them: If you were blind, you should not have sin: but now you say: We see. Your sin remaineth.