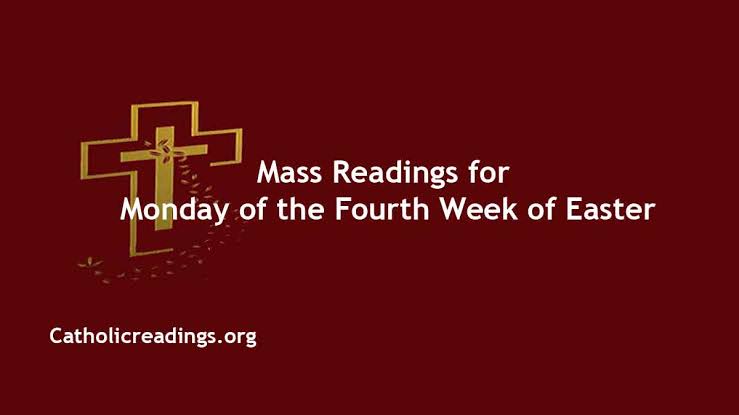 First Reading: Acts 11: 1-18
1 And the apostles and brethren, who were in Judea, heard that the Gentiles also had received the word of God.

2 And when Peter was come up to Jerusalem, they that were of the circumcision contended with him,

3 Saying: Why didst thou go in to men uncircumcised, and didst eat with them?

4 But Peter began and declared to them the matter in order, saying:

5 I was in the city of Joppe praying, and I saw in an ecstasy of mind a vision, a certain vessel descending, as it were a great sheet let down from heaven by four corners, and it came even unto me.

6 Into which looking, I considered, and saw fourfooted creatures of the earth, and beasts, and creeping things, and fowls of the air:

7 And I heard also a voice saying to me: Arise, Peter; kill and eat.

8 And I said: Not so, Lord; for nothing common or unclean hath ever entered into my mouth.

9 And the voice answered again from heaven: What God hath made clean, do not thou call common.

10 And this was done three times: and all were taken up again into heaven.

11 And behold, immediately there were three men come to the house wherein I was, sent to me from Caesarea.

12 And the Spirit said to me, that I should go with them, nothing doubting. And these six brethren went with me also: and we entered into the man’s house.

13 And he told us how he had seen an angel in his house, standing, and saying to him: Send to Joppe, and call hither Simon, who is surnamed Peter,

14 Who shall speak to thee words, whereby thou shalt be saved, and all thy house.

15 And when I had begun to speak, the Holy Ghost fell upon them, as upon us also in the beginning.

16 And I remembered the word of the Lord, how that he said: John indeed baptized with water, but you shall be baptized with the Holy Ghost.

17 If then God gave them the same grace, as to us also who believed in the Lord Jesus Christ; who was I, that could withstand God?

18 Having heard these things, they held their peace, and glorified God, saying: God then hath also to the Gentiles given repentance unto life.

3 My soul hath thirsted after the strong living God; when shall I come and appear before the face of God?

43:3 Send forth thy light and thy truth: they have conducted me, and brought me unto thy holy hill, and into thy tabernacles.

4 And I will go in to the altar of God: to God who giveth joy to my youth. To thee, O God my God, I will give praise upon the harp: why art thou sad, O my soul?

14 I am the good shepherd, says the Lord; I know mine, and mine know me.

Gospel: John 10:1-10
1 Amen, amen I say to you: He that entereth not by the door into the sheepfold, but climbeth up another way, the same is a thief and a robber.

2 But he that entereth in by the door is the shepherd of the sheep.

3 To him the porter openeth; and the sheep hear his voice: and he calleth his own sheep by name, and leadeth them out.

4 And when he hath let out his own sheep, he goeth before them: and the sheep follow him, because they know his voice.

5 But a stranger they follow not, but fly from him, because they know not the voice of strangers.

7 Jesus therefore said to them again: Amen, amen I say to you, I am the door of the sheep.

8 All others, as many as have come, are thieves and robbers: and the sheep heard them not.

9 I am the door. By me, if any man enter in, he shall be saved: and he shall go in, and go out, and shall find pastures.

10 The thief cometh not, but for to steal, and to kill, and to destroy. I am come that they may have life, and may have it more abundantly.