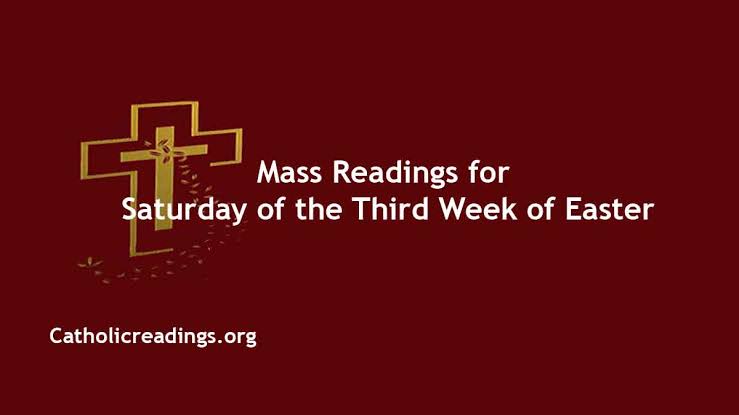 First Reading: Acts 9: 31-42
31 Now the church had peace throughout all Judea, and Galilee, and Samaria; and was edified, walking in the fear of the Lord, and was filled with the consolation of the Holy Ghost.

32 And it came to pass that Peter, as he passed through, visiting all, came to the saints who dwelt at Lydda.

33 And he found there a certain man named Eneas, who had kept his bed for eight years, who was ill of the palsy.

34 And Peter said to him: Eneas, the Lord Jesus Christ healeth thee: arise, and make thy bed. And immediately he arose.

35 And all that dwelt at Lydda and Saron, saw him: who were converted to the Lord.

36 And in Joppe there was a certain disciple named Tabitha, which by interpretation is called Dorcas. This woman was full of good works and almsdeeds which she did.

37 And it came to pass in those days that she was sick, and died. Whom when they had washed, they laid her in an upper chamber.

38 And forasmuch as Lydda was nigh to Joppe, the disciples hearing that Peter was there, sent unto him two men, desiring him that he would not be slack to come unto them.

39 And Peter rising up, went with them. And when he was come, they brought him into the upper chamber. And all the widows stood about him weeping, and shewing him the coats and garments which Dorcas made them.

40 And they all being put forth, Peter kneeling down prayed, and turning to the body, he said: Tabitha, arise. And she opened her eyes; and seeing Peter, she sat up.

41 And giving her his hand, he lifted her up. And when he had called the saints and the widows, he presented her alive.

42 And it was made known throughout all Joppe; and many believed in the Lord.

12 What shall I render to the Lord, for all the things he hath rendered unto me?

13 I will take the chalice of salvation; and I will call upon the name of the Lord.

14 I will pay my vows to the Lord before all his people:

15 Precious in the sight of the Lord is the death of his saints.

17 I will sacrifice to thee the sacrifice of praise, and I will call upon the name of the Lord.

63c, 68c Your words, Lord, are spirit and life. You have the words of eternal life.

61But Jesus, knowing in himself, that his disciples murmured at this, said to them: Doth this scandalize you?

62If then you shall see the Son of man ascend up where he was before?

63It is the spirit that quickeneth: the flesh profiteth nothing. The words that I have spoken to you, are spirit and life.

64But there are some of you that believe not. For Jesus knew from the beginning, who they were that did not believe, and who he was, that would betray him.

65. And he said: Therefore did I say to you, that no man can come to me, unless it be given him by my Father.

66. After this many of his disciples went back; and walked no more with him.

67. Then Jesus said to the twelve: Will you also go away?

68 And Simon Peter answered him: Lord, to whom shall we go? thou hast the words of eternal life.

69. And we have believed and have known, that thou art the Christ, the Son of God.

Faith To Faith 24th April 2021 by Gloria Copeland - Inside Out