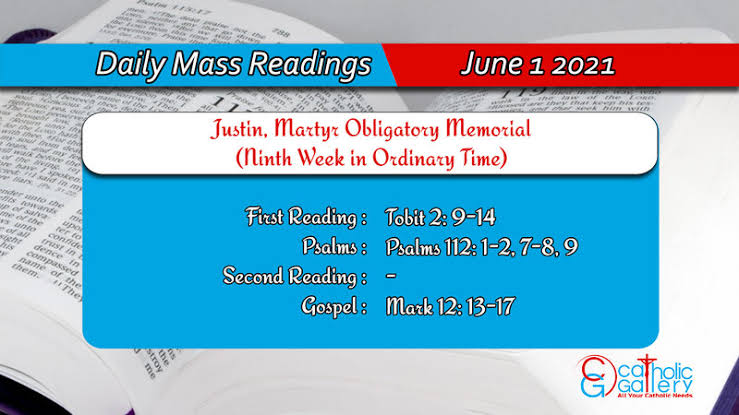 First Reading: Tobit 2:9-14
9 Now it happened one day, that being wearied with burying, he came to his house, and cast himself down by the wall and slept,

10 And as he was sleeping, hot dung out of a swallow’s nest fell upon his eyes, and he was made blind. Now this trial the Lord therefore permitted to happen to him, that an example might be given to posterity of his patience, as also of holy Job. For whereas he had always feared God from his infancy, and kept his commandments, he repined not against God because the evil of blindness had befallen him, But continued immoveable in the fear of God, giving thanks to God all the days of his life. For as the kings insulted over holy Job: so his relations and kinsmen mocked at his life, saying: Where is thy hope, for which thou gavest alms, and buriedst the dead? But Tobias rebuked them, saying: Speak not so: For we are the children of the saints, and look for that life which God will give to those that never change their faith from him.

11 Now Anna his wife went daily to weaving work, and she brought home what she could get for their living by the labour of her hands.

12 Whereby it came to pass, that she received a young kid, and brought it home:

13 And when her husband heard it bleating, he said: Take heed, lest perhaps it be stolen: restore ye it to its owners, for it is not lawful for us either to eat or to touch any thing that cometh by theft.

14 At these words his wife being angry answered: It is evident thy hope is come to nothing, and thy alms now appear. And with these, and other such like words she upbraided him.

1 Blessed is the man that feareth the Lord: he shall delight exceedingly in his commandments.

2 His seed shall be mighty upon earth: the generation of the righteous shall be blessed.

7 The just shall be in everlasting remembrance: he shall not hear the evil hearing. His heart is ready to hope in the Lord:

8 His heart is strengthened, he shall not be moved until he look over his enemies.

9 He hath distributed, he hath given to the poor: his justice remaineth for ever and ever: his horn shall be exalted in glory.

17, 18 May the Father of our Lord Jesus Christ enlighten the eyes of our hearts, that we may know what is the hope that belongs to his call.

Gospel: Mark 12:13-17
13 And they sent to him some of the Pharisees and of the Herodians; that they should catch him in his words.

14 Who coming, say to him: Master, we know that thou art a true speaker, and carest not for any man; for thou regardest not the person of men, but teachest the way of God in truth. Is it lawful to give tribute to Caesar; or shall we not give it?

15 Who knowing their wiliness, saith to them: Why tempt you me? bring me a penny that I may see it.

16 And they brought it him. And he saith to them: Whose is this image and inscription? They say to him, Caesar’s.