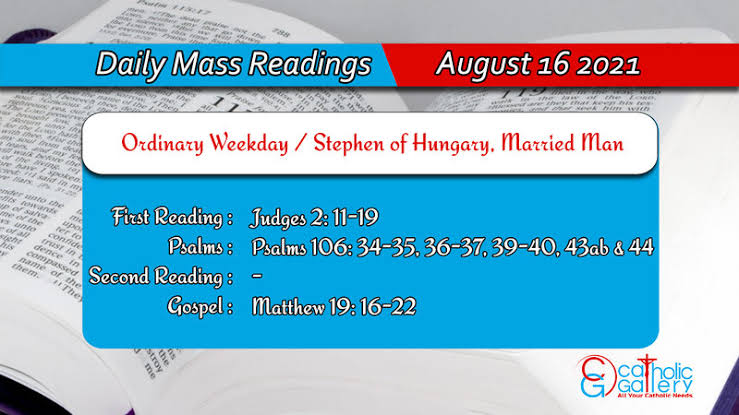 First Reading: Judges 2: 11-19
11 And the children of Israel did evil in the sight of the Lord, and they served Baalim.

12 And they left the Lord the God of their fathers, who had brought them out of the land of Egypt: and they followed strange gods, and the gods of the people that dwelt round about them, and they adored them: and they provoked the Lord to anger.

13 Forsaking him, and serving Baal and Astaroth.

14 And the Lord being angry against Israel, delivered them into the hands of plunderers: who took them and sold them to their enemies, that dwelt round about: neither could they stand against their enemies:

15 But whithersoever they meant to go, the hand of the Lord was upon them, as he had said, and as he had sworn to them: and they were greatly distressed.

16 And the Lord raised up judges, to deliver them from the hands of those that oppressed them: but they would not hearken to them,

17 Committing fornication with strange gods, and adoring them. They quickly forsook the way, in which their fathers had walked: and hearing the commandments of the Lord, they did all things contrary.

18 And when the Lord raised them up judges, in their days he was moved to mercy, and heard the groanings of the afflicted, and delivered them from the slaughter of the oppressors.

19 But after the judge was dead, they returned, and did much worse things than their fathers had done, following strange gods, serving them and adoring them. They left not their own inventions, and the stubborn way, by which they were accustomed to walk.

34 They did not destroy the nations of which the Lord spoke unto them.

35 And they were mingled among the heathens, and learned their works:

36 And served their idols, and it became a stumblingblock to them.

37 And they sacrificed their sons, and their daughters to devils.

39 And was defiled with their works: and they went aside after their own inventions.

40 And the Lord was exceedingly angry with his people: and he abhorred his inheritance.

43ab Many times did he deliver them. But they provoked him with their counsel.

44 And he saw when they were in tribulation: and he heard their prayer.

3 Blessed are the poor in spirit: for theirs is the kingdom of heaven.

Gospel: Matthew 19: 16-22
16 And behold one came and said to him: Good master, what good shall I do that I may have life everlasting?

17 Who said to him: Why asketh thou me concerning good? One is good, God. But if thou wilt enter into life, keep the commandments.

19 Honour thy father and thy mother: and, Thou shalt love thy neighbour as thyself.

20 The young man saith to him: All these I have kept from my youth, what is yet wanting to me?

21 Jesus saith to him: If thou wilt be perfect, go sell what thou hast, and give to the poor, and thou shalt have treasure in heaven: and come follow me.

22 And when the young man had heard this word, he went away sad: for he had great possessions.