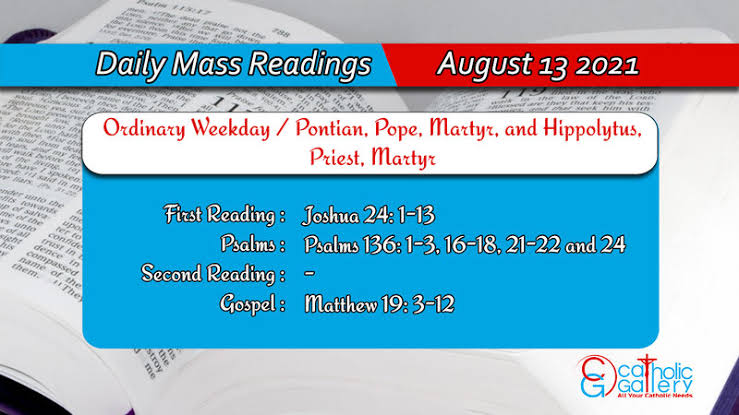 First Reading: Joshua 24: 1-13
1 And Josue gathered together all the tribes of Israel in Sichem, and called for the ancients, and the princes, and the judges, and the masters: and they stood in the sight of the Lord:

2 And he spoke thus to the people: Thus saith the Lord the God of Israel: Your fathers dwelt of old on the other side of the river, Thare the father of Abraham, and Nachor: and they served strange gods.

3 And I took your father Abraham from the borders of Mesopotamia: and brought him into the land of Chanaan: and I multiplied his seed,

4 And gave him Isaac: and to him again I gave Jacob and Esau. And I gave to Esau mount Seir for his possession: but Jacob and his children went down into Egypt.

5 And I sent Moses and Aaron, and I struck Egypt with many signs and wonders.

6 And I brought you and your fathers out of Egypt, and you came to the sea: and the Egyptians pursued your fathers with chariots and horsemen, as far as the Red Sea.

7 And the children of Israel cried to the Lord: and he put darkness between you and the Egyptians, and brought the sea upon them, and covered them. Your eyes saw all that I did in Egypt, and you dwelt in the wilderness a long time:

8 And I brought you into the land of the Amorrhite, who dwelt beyond the Jordan. And when they fought against you, I delivered them into your hands, and you possessed their land, and slew them.

9 And Balac son of Sephor king of Moab arose and fought against Israel. And he sent and called for Balaam son of Beor, to curse you:

10 And I would not hear him, but on the contrary I blessed you by him, and I delivered you out of his hand.

12 And I sent before you hornets: and I drove them out from their places, the two kings of the Amorrhites, not with thy sword nor with thy bow.

13 And I gave you a land, in which you had not laboured, and cities to dwell in which you built not, vineyards and oliveyards, which you planted not.

1 Praise the Lord, for he is good: for his mercy endureth for ever.

2 Praise ye the God of gods: for his mercy endureth for ever.

3 Praise ye the Lord of lords: for his mercy endureth for ever.

16 Who led his people through the desert: for his mercy endureth for ever.

17 Who smote great kings: for his mercy endureth for ever.

18 And slew strong kings: for his mercy endureth for ever.

21 And he gave their land for an inheritance: for his mercy endureth for ever.

22 For an inheritance to his servant Israel: for his mercy endureth for ever.

24 And he redeemed us from our enemies: for his mercy endureth for ever.

Gospel: Matthew 19: 3-12
3 And there came to him the Pharisees tempting him, and saying: Is it lawful for a man to put away his wife for every cause?

4 Who answering, said to them: Have ye not read, that he who made man from the beginning, Made them male and female? And he said:

5 For this cause shall a man leave father and mother, and shall cleave to his wife, and they two shall be in one flesh.

6 Therefore now they are not two, but one flesh. What therefore God hath joined together, let no man put asunder.

7 They say to him: Why then did Moses command to give a bill of divorce, and to put away?

8 He saith to them: Because Moses by reason of the hardness of your heart permitted you to put away your wives: but from the beginning it was not so.

10 His disciples say unto him: If the case of a man with his wife be so, it is not expedient to marry.

11 Who said to them: All men take not this word, but they to whom it is given.