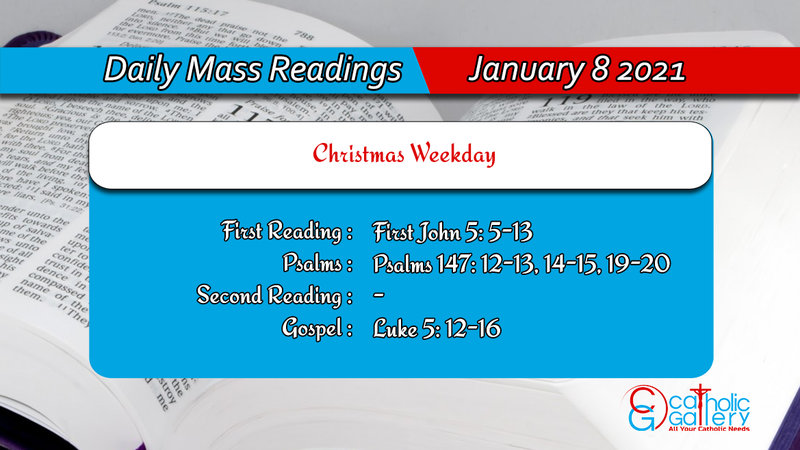 You are reading Today’s Catholic Daily Mass Readings for Today Friday 8th January 2021. Be blessed and inspired by today’s reading. God bless you!

First Reading: First John 5: 5-13
5 Who is he that overcometh the world, but he that believeth that Jesus is the Son of God?

7 And there are three who give testimony in heaven, the Father, the Word, and the Holy Ghost. And these three are one.

8 And there are three that give testimony on earth: the spirit, and the water, and the blood: and these three are one.

11 And this is the testimony, that God hath given to us eternal life. And this life is in his Son.

13 These things I write to you, that you may know that you have eternal life, you who believe in the name of the Son of God.

13 Because he hath strengthened the bolts of thy gates, he hath blessed thy children within thee.

14 Who hath placed peace in thy borders: and filleth thee with the fat of corn.

15 Who sendeth forth his speech to the earth: his word runneth swiftly.

19 Who declareth his word to Jacob: his justices and his judgments to Israel.

20 He hath not done in like manner to every nation: and his judgments he hath not made manifest to them. Alleluia.

Gospel: Luke 5: 12-16
12 And it came to pass, when he was in a certain city, behold a man full of leprosy, who seeing Jesus, and falling on his face, besought him, saying: Lord, if thou wilt, thou canst make me clean.

13 And stretching forth his hand, he touched him, saying: I will. Be thou cleansed. And immediately the leprosy departed from him.

14 And he charged him that he should tell no man, but, Go, shew thyself to the priest, and offer for thy cleansing according as Moses commanded, for a testimony to them.

15 But the fame of him went abroad the more, and great multitudes came together to hear, and to be healed by him of their infirmities.

16 And he retired into the desert, and prayed.