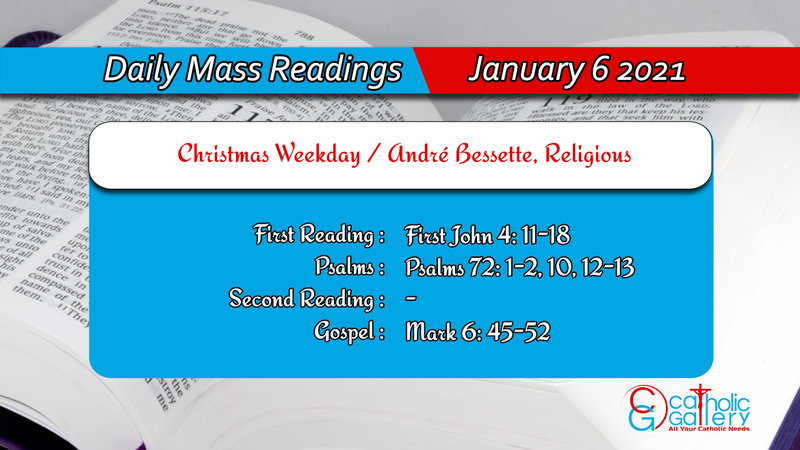 You are reading Catholic Daily Mass Readings for Today Wednesday 6th January 2021. Be blessed and inspired by today’s reading. God bless you!

12 No man hath seen God at any time. If we love one another, God abideth in us, and his charity is perfected in us.

13 In this we know that we abide in him, and he in us: because he hath given us of his spirit.

14 And we have seen, and do testify, that the Father hath sent his Son to be the Saviour of the world.

15 Whosoever shall confess that Jesus is the Son of God, God abideth in him, and he in God.

16 And we have known, and have believed the charity, which God hath to us. God is charity: and he that abideth in charity, abideth in God, and God in him.

17 In this is the charity of God perfected with us, that we may have confidence in the day of judgment: because as he is, we also are in this world.

18 Fear is not in charity: but perfect charity casteth out fear, because fear hath pain. And he that feareth, is not perfected in charity.

2 Give to the king thy judgment, O God: and to the king’s son thy justice: To judge thy people with justice, and thy poor with judgment.

10 The kings of Tharsis and the islands shall offer presents: the kings of the Arabians and of Saba shall bring gifts:

12 For he shall deliver the poor from the mighty: and the needy that had no helper.

13 He shall spare the poor and needy: and he shall save the souls of the poor.

Gospel: Mark 6: 45-52
45 And immediately he obliged his disciples to go up into the ship, that they might go before him over the water to Bethsaida, whilst he dismissed the people.

46 And when he had dismissed them, he went up to the mountain to pray.

47 And when it was late, the ship was in the midst of the sea, and himself alone on the land.

48 And seeing them labouring in rowing, (for the wind was against them,) and about the fourth watch of the night, he cometh to them walking upon the sea, and he would have passed by them.

49 But they seeing him walking upon the sea, thought it was an apparition, and they cried out.

50 For they all saw him, and were troubled. And immediately he spoke with them, and said to them: Have a good heart, it is I, fear ye not.

51 And he went up to them into the ship, and the wind ceased: and they were far more astonished within themselves:

52 For they understood not concerning the loaves; for their heart was blinded.