BBNaija: “The Only Thing Ozo Can Control Is The Car He Won” – Laycon

Laycon has said Ozo is not in control of himself anymore since he became close to Nengi.]8

Laycon has said Ozo is not in control of himself anymore since he became close to Nengi.

He said this after Ozo joined followed Nengi to the head of house lounge after their Friday night Jacuzzi party and stayed till late in the night.

Laycon feared he may pass the night in the room which is unacceptable since he was not a deputy head of house. Also, it could have earned him a strike and disqualification.

Reacting to the danger that lies ahead of him, Laycon insisted Vee goes in to bring him out because Ozo has lost control of himself once he is with Nengi.

BBNaija 2020: “I Hope TrikyTee And Laycon Are Evicted So That Dorathy and I Can Remain” – Ozo 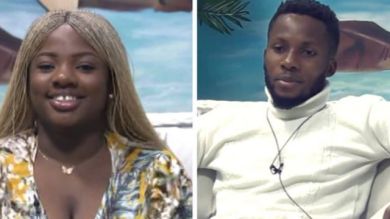