Age is Just a Number 27 August 2020 Update starts with Bari Amma curses Vaidika for revenging their family. She turned Sahil into a stone. Bhoomi also blames Vaidika and questions if she wanted to kill Sahil through her black magic.

Nani defends Vaidika but Prachi also disgraces Vaidika. Vaidika shouts at them to stop this. Do they realize what’s going on in this house, they must come along and see by themselves who does this. in Nisha’s room, Vaidika finds no traces of black magic. The family doesn’t accept any of Vaidika’s accusations. Nisha also comes from behind and asks why she would do so, she has nothing to do with Sahil.

Puneesh comes from behind with the traces of black magic from Vaidika’s room. He blames that Vaidika understands well how men are turned to stones. Nisha was happy about slaving Puneesh, she smirks that she turned Vaidika’s game over her. Nani defends Vaidika from everyone else’s accusations. Vaidika says Sahil’s life is endangered. She looks at the time.

Vaidika confronts Nisha and says the day has started, they have to drape Mata Rani with Chunri. She challenge Nisha to accompany her and drape the idol, everyone’s stance will be clear.

In the temple, Nisha arrives with the Chunri. She and Nisha walk towards the temple together. Vaidika throws the Chunri near the temple while Nisha smirks. She recalls she deterred Vaidika to kill Sahil whose heart was still beating for another 12 hours. Vaidika announces that she can’t do this. Bari Amma clutches Vaidika’s neck. Nani still blames Nisha as a witch, Nisha agrees to drape Mata Rani with her own hands. She creates a shell around the idol using her powers and covers it with the Chunri. Puneesh tells Bari Amma that they can’t let Vaidika live in this house anymore, she is dangerous for everyone’s life. Age is Just a Number 27 August 2020

He calls some men inside, draped in black clothes and painted faces. Nisha smirks as the men head towards Vaidika. Vaidika continue to resist and plead the men as they tie her to a wall in the temple. Vaidika requests them to leave her else Nisha may kill Sahil. She prays for God for any kind of help saving Sahil.Nisha tells Agarwal family that she knows a Baba, he might have some remedy for this disease. Can she take Sahil there? Bhoomi was insistent to come along. Nisha makes up that the old man doesn’t like crowd. He might dislike otherwise.In the temple, Sahil was tied right in front of Vaidika with another wall.

She claims that today she is victorious, she, Nidhi Agarwal. Today, it’s the day of revenge for her, she will kill Sahil today. She will tear Sahil into pieces today blowing him as dust. And along with Ravan, Vaidika must also die in hands of the Baba. The men in black attires return with flames in hand. Nisha was uncomfortable with the flame and goes aside. The shorter among the two men pull off the fake moustache and wig, it was Aarya and the Pandit ji.

Pandit ji brought a remedy for Vaidika to light the flame in temple. Aarya also brought Nisha’s shirt which Vaidika had to burn through the same flame. Vaidika hugs Nisha, then sends Aarya with Pandit ji for her protection.

Vaidika comes in front of the idol and dances vigorously. There were heavy winds blowing in the temple’s vicinity. She finishes her dance off and notices the flame had lightened by itself. She hurries there and place Nisha’s shirt in the flame. Nisha feels burning in her whole body and wonders what’s happening with her. She hurries towards the temple but was unable to walk closer. She tells Vaidika she can never recover Sahil. Vaidika challenges Nisha to first undo her magic on Sahil.

Nisha works her magical powers. The cracks in the stone statue break and Sahil emerges out. Vaidika runs towards him, crying badly. They hug each other. Sahil and Vaidika were determined not to spare Nisha so easily. Nisha cheerfully tells them to go and see what she did to Agarwal family, who would save them now?Sahil and Vaidika enter Agarwal House calling Ved, Sadika. They hear a call from kids who had been locked in a dark room. Vaidika wonders how Nisha can vanish them all, they can hear their voices but can’t see them.

Nisha comes in and says Vaidika and Sahil can only hear the family, the family can see them both but can’t reach them; and if they come out they won’t be left alive. She challenges Vaidika to do a similar dance for her as well. Vaidika wasn’t ready. Nisha was sure they will be able to do anything, once they know where the family has been kept. They turn towards a photo frame. The family was trying a way out of a door-less dark room.

Nisha blackmails Vaidika and asks whom she holds dearer, her mother, Aarya, Ved or Sahil? Sahil asks Nidhi what she wants. Nisha clearly states she wants Sahil’s life. But Vaidika intervened once again. She barters that if Sahil agrees to get into the frame, she may release his whole family. But Sahil won’t be able to come out. Sahil agrees. Vaidika resists. Sahil convince Vaidika to trust him, they have witnessed her black powers already.Inside the frame, the family was worried because of Sahil’s decision.

Nidhi sends Sahil into the frame. Sahil enters a dark room. Vaidika watch Sahil lost into separate room where he calls his family. He traces the voices from a nearby room. Sahil asks everyone to find, there must surely be some out door. Sahil recalls there was a red door on the right corner of painting. His hand fell over a wall hanging that twists and unlocks the door. Sahil helps the family go out of the door one by one but was locked himself.

Outside, Nisha welcomes the family. She appreciates that the family didn’t trust Vaidika but her. She introduces herself as Nidhi Agarwal, ex-wife of Sahil. Her face was burnt badly after acid victimization. She got plastic surgery and decided to destroy Agarwal family. Now, she got hold of Sahil. They watch Sahil trapped in the frame. Nisha says Sahil would be finished today, and Ved will already be dead of illness.

All at once, strong winds blow from the temple’s side. Vaidika stood with Trishol in her hands and heads towards Nisha. She says devil can no way win on this day, she will save Sahil with this Trishol. If Sahil can be saved by killing Nisha only, then Nisha will have to die. She charge Nisha with the Trishol but she vanishes instead, laughing hysterically which herself revealing in multiple shadows. She says if Vaidika mistakenly touches the wrong reflection, all of them including Sahil would vanish.

Nisha and her multiple shadows move towards Sahil’s frame. Vaidika notices only a single being had a shadow on wall, recognizes the real Nidhi and attacks her from behind. The reflections vanish, Nisha screams out of pain while Sahil jumps out of the frame. Nidhi plucks the Trishol off her arm and blames Vaidika for snatching all her powers.

Age is Just a Number 27 August 2020 Update ends as Vaidika sends Aarya to request Pandit ji sprinkle Ganga Jal around the house. They pray in front of the temple. Sahil was grateful to Vaidika for saving his life, he wonders why they couldn’t realize it was Nisha. Vaidika says there is another truth he must know. Bhoomi and Bari Amma were alert. 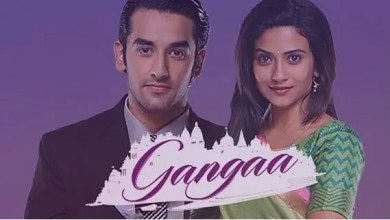