Age is Just a Number 26 August 2020 Update starts as Vaidika comes to Sahil and tells him that Nisha is casting black magic on their family, because she is actually Nidhi. She got her plastic surgery and has come here with the intention of revenge. She tells Sahil that only their son Ved is suffering in midst of all this. She tells Sahil that Ved is their son, her and Sahil’s.

She was pregnant by artificial insemination and by hospital’s mistake Sahil became her donor. She requests Sahil to help his child, Ved needs his father right now. Sahil at once push Vaidika away. He turns to Nisha who laughs hysterically at fooling Vaidika.

Vaidika comes to Pandit ji and says Nisha has taken control of Sahil, she might harm him. Nisha hears their conversation. Pandit ji tells Vaidika about a testimony, if completed breaks the effects of black magic. He clarifies that the testimony is hard, and people are mostly unable to complete it. She must do it with Sahil, would she be able to do that? Vaidika was determined to do anything for Sahil’s life. Nisha thinks Vaidika is a stubborn woman, she claims of not loving Sahil but does anything for him. She will not let Sahil live and make Vaidika suffer for sure.

Sahil brings Bhoomi into their room and bolts the door. He accepts that he could never take time for Bhoomi, though she did a lot for him and Ved. Tonight, everything will change and they will be united. There, Nidhi cheers that she is controlling both Sahil and Bhoomi right now. Sahil is busy with Bhoomi, and Vaidika can’t speak to him or convince him for any pooja.

Vaidika comes to Sahil’s room to speak to him about Pooja. She spots them from window and feels uncomfortable. Nisha comes to tease Vaidika for being jealous of her sister. She tells Vaidika that she heard Vaidika’s planning with Pandit ji against her, and indulged Sahil with Bhoomi. Tomorrow as well, at the time of Pooja Sahil will be busy. She challenge Vaidika to break her spell and laughs that Vaidika is helpless.

Deepak forbids Gauri touch his daughter. He claims Sadika’s custody if Gauri decides to leave him. Gauri questions why Deepak wish to separate a minor daughter from her mother. Gauri says she will tell the court how Deepak left his daughter when she was born. Deepak says he brought Sadika back, and wakes her up to tell Sadika about her mother. Gauri forcefully pulls Deepak back. Deepak blackmails Gauri that if she tries to leave him, he will ruin Sadika’s life.

Sahil and Bhoomi hear Ved’s scream and hurries to his room. Vaidika was appreciating Ved for screaming so high, he is surely a strong boy. Bhoomi complains to Vaidika for untimely act, they were afraid of Ved’s screaming. Vaidika was apologetic to Ved and stops Nisha in the corridor asking if she got a setback. God never let Devil win, this Dashera wouldn’t change the nature. She played a game with Ved, and it ruined Nidhi’s set up game. Nisha says it’s time for her pooja, else she must have replied Vaidika well. But Vaidika will continue to watch this dancing video doll in face of Sahil.

Bhoomi and Bari Amma were against the setup of Pooja. Bari Amma decides that only Bhoomi will do the pooja if any. Vaidika recalls Pandit ji’s warnings and severity of the black magic.

She announces that this is her house as well, and she will do the pooja. Sahil comes to the hall and questions about the matter. Vaidika tells Sahil that it’s important for her and Sahil to sit in a pooja together to maintain peace in the house. Bari Amma was against it, but Sahil reminds Bari Amma that once in the past Anjana made him sit in the pooja as well. Age is Just a Number 26 August 2020

He feels a screeching pain in his arm, Nisha was twisting the black puppet’s arm to hurt Sahil. Pandit ji challenges that it’s a testimony which must be performed standing on nails laid over burning coal bed. Resultantly, a bowl of milk will fill and consuming it will free them from the devilish effects on the house. Vaidika prays for the courage to complete the testimony. Sahil and Vaidika step their feet over the nail bed laid over coals, press one hand against each other and repeat the said Mantar.

The testimony was tough. Sahil’s shadow in Nisha’s room shortens moving away from her. Nisha was fearful that it seems her strengths are weakening, someone else must be taking advantage of her powers and gaining strength but she wonders whom? Vaidika and Sahil’s feet were bleeding, Sahil’s condition also worsening. Vaidika supports him as he goes faint. Prachi doesn’t let Bhoomi stop Sahil considering it God’s will. The bowl of milk was filled.

Nisha wasn’t ready to lose her powers.Pandit ji asks the family to be grateful to Shiv and Shakti, they have gained miraculous blessings today.Nisha was furious over Vaidika fearing that she might lose all of her powers. She works her powers to gain help from Puneesh. Puneesh opens his eyes and takes the milk bowl while everyone was busy praying. He takes the bowl of milk to Nisha.

Nisha pours the milk over her pot and the shadow of her power regains size and strength, entering into her again.Vaidika notices the pot of milk was emptied. Bhoomi accuses Vaidika for all the drama. They were shocked to see Sahil walk as if controlled. Pandit ji was worried and says their testimony failed, Sahil’s life is endangered. Vaidika run behind Sahil to stop him but was shocked to see Sahil turning into black stone until he was a complete statue.

Age is Just a Number 26 August 2020 Update ends as Nisha laughs hysterically over her victory, and boasts about turning Sahil to a stone. She warned Vaidika already to mingle with her, nothing can work in front of Nisha’s powers. Now Sahil can be torn to pieces and everyone else would be helpless.The family was tensed. 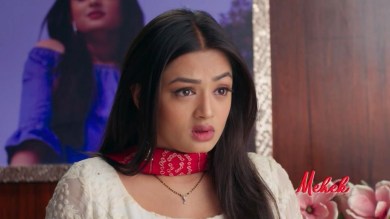