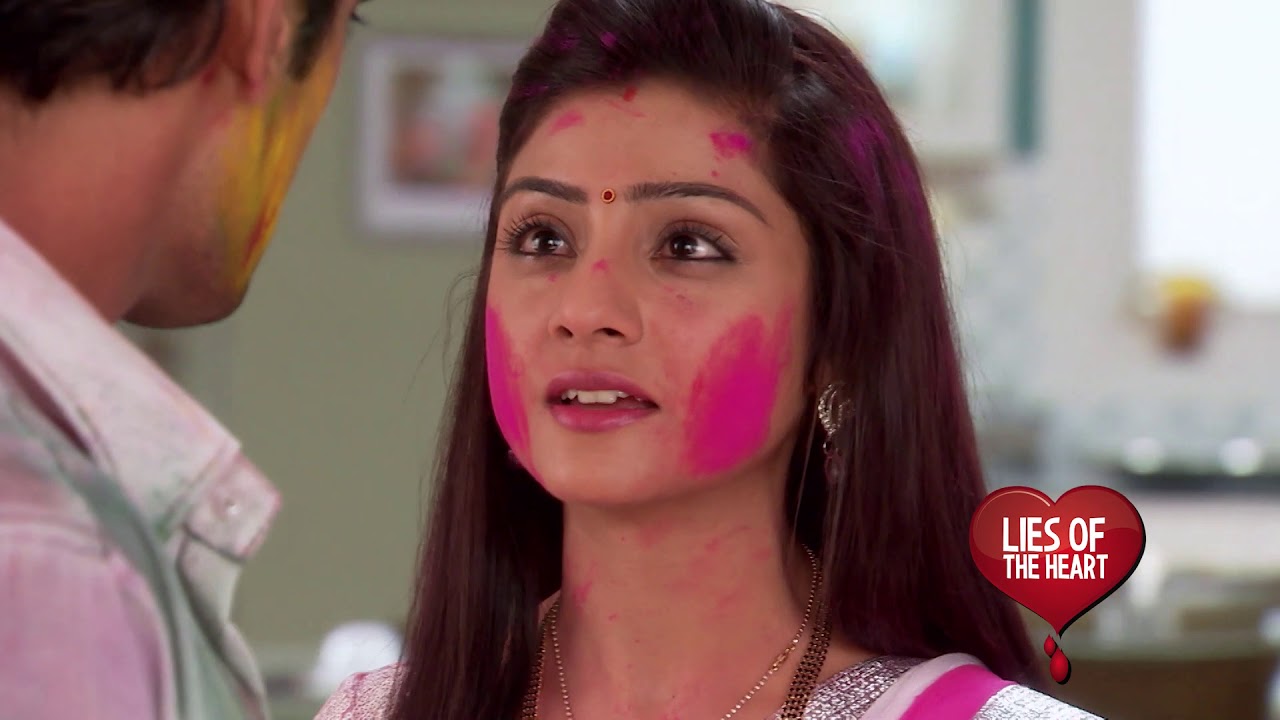 Lies of the Heart 3 May 2020 Update: Shashi hesitatingly tells Samrat that she needs to talk to him about something. Samrat asks her to come to the point straightaway. She says that something very wrong has happened and its very embarrassing.

While kanchan is crying, diwaker vents out his frustrationm at samrat’s callousness for the hard work that he is doing, just to keep the family business alive and instaed being treated as a servant. kanchan asks him to calm down as he would get himself sick. He says that she too has to bear insults due to him. urmi comes in and says that if he feels so, then he should. they are surprised.

Kanchan asks whats she dsaying. urmi says that if he has to bear this all, then he has to make a descision, and that his self respect is lost somewhere, and that he shouldnt compromise on this. urmi says that she realised it too, with time, asking him to maintain his dignity and self-respect. Kanchan asks if she wants him to work somewhere else. urmi asks if he doesnt have faith to work somewhere else.

Diwaker says that he can. Kanchan says that diwakler is equally helpful in the business, whether samrat wants it or not. urmi says that samrat doesnt realise and hence the professional relation is useless. urmi asks him to prove to samrat what he is. Urmi tells Diwakar to start business on his own and leave samrat, and starts his own business. kanchan says that urmi is right. Diwaker starts to think in deep.

Granny finds asha working in the kitchen Granny says that she needs a great grandson, and asks her to concentrate on this. Asha asks the same nonsense what she has to focus on. granny is frustrated with her stupidity. she asks her to get ahead with this work, or else she wouldnt take long to take asha back to her mother’s place. Lies of the Heart 3 May 2020 Update

She leaves. asha is tensed. asha is anxious what to do, and again starts chatting up nonsense, not realiisng what Granny wants.
She is disturbed with granny’s demands and thinks that she should ask her mother about it, so that she can guide her. After again a display of nonsense, asha asks her how did she get asha when she was a child. Her mother tells her that it was God’s gift, and the idiot that she is, she again takes it literally meaning to be temple.

The next morning, gaurav and saroj try to get anu to talk. anu says that she sees how urmi and gaurav are in their marriages. gaurav asks her that she shouldnt take on wrong examples, and thsat its all in fate. Anu says that she doesnt blelive in such things. Saroj asks her to meet the boy once as she really liked the guy. She asks gaurav to coax her. Gaurav says that the marriage would happen only when she consents, and that she wont be forced into marriage, by anyone in the house. anu finally complies, when she knows that she would have the last say

Scene 3:
Location: Urmi’s dance classes.
Manish comes with flowers, and again when he finds Urmi, he apologizes profusely for what he did. Urmi reprimands him for calling at her home and asks him never to do this again. Urmi asks him to stay in his limits and not mess with her. the rest of the people watch. She asks him to be away from her, and not bother her. he says that he realized his mistake and asks for forgiveness, giving a bunch of roses. Urmi is shocked. he says that if she doesn’t accept this, he would mean that she didn’t forgive him. As the instructor starts giving instructions, Urmi doesn’t feel like creating a scene and just to end it, she silently stuffs up the bunch of roses in her bag. She starts dancing, while Manish eyes her leeringly.

Scene 4:
Location: Samrat’s residence
The next morning, while the children are prancing around, Shaurya breaks a vase and asks mandira to take the blame and when she doesnt, he says that he can order her, even though he is the younger onje, after taking example from Samrat, who even being younger scolds Diwaker. they hear samrat’s screams and are scared. samrat comes and asks everyone to gather around, carrying a letter in his hand, and especially asks for Diwaker. All gather including urmi. He shows them diwaker’s resignation letter.

Lies of the Heart 3 May 2020 Update All are shocked. Diwaker stands defiant. Samrat taunts him for his descision, and claps on his face. samrat diwaker and asks how can he resign and have the guts to leave and who
motivated him, and instigated him like this. Shashi and aditi ask him to rethink. kanchan asks adiit not to blame as its all her husband’s fault. aditi asks her not to blame her husband in everything. kanchan is told by samrat that her husband is incompetent and lazy. samrat asks what has he done to him, as he hasnt done anything with sincerity and find new ways to torture him. he asks diwaker the reasons behind this. Diwaker says that this isnt a threatening but a descision. samrat taunts him yet again, in front of the entire family.

Samrat asks him what would he like to do now. Diwaker says that he would work in a place where he and his worjk are respected. samrat asks who would give him a job. Diwaker says that time will tell everything. tauji asks him to let go, as if there’s capability, only then there would be a job. samrat asks rudra not to stand quiet and say something. Rudra says that till now he always stopped diwaker as it was a matter of the family, but not anymore, and that he is a mature person and he wont say anything to diwaker to stop him. He says that rudra too has a right to deserver his own self respect. Lies of the Heart 3 May 2020 Update

Samrat is shocked at this stance. He agrees to Diwaker being independant, then he has to do onething. He asks Diwaker to pack his belongings, and leave his house, along with the rest of the family.

Location: Samrat’s residence
The whole family is shocked to hear samrat ordering diwaker to get out of the house. Diwaker says that he has forgotten something. Diwaker stands upto samrat and tells that he too has an equal right on this house, and that he wont go anywhere. samrat is surprised.

He says that since samrat can stoop so low, he too wont hesitate and that he would say such things. Rudra too says that this house is his first, and diwaker too has a right, being the elder brother. Samrat is shocked. urmi is satisfied. Samrat tells rudra that this house maybe his, but the luxury and the standard of living, has been given by him only.

Urmi asks samrat to calm down and not involve family in this Samrat asks her to stop lecturing, as this is between two brothers. he asks diwaker what he wants to do, live free without any work. rudra asks if he would talk like this. diwaker says that he wont touch anything of his, and his family wont come near his. Samrat is about to lose it, when tauji asks him to let be, and calms samrat down. he says things that samrat would like to hear gratifying him, and samrat resignedly agrees. Lies of the Heart 3rd May 2020 Update

Diwaker and kanchan are shocked to hear tauji like that. urmi is amused. samrat tells everyone that diwaker and his family would do everything on their own, and that he doesnt have anything to with him, and that he is dead to him, and would see the capacity.

Samrat rushes to his room, while diwaker too challenges samrat. The entire family is tensed, as diwaker walks out. Tauji is amused.

Lies of the Heart 3rd May 2020 – In the room, samrat vents out his frustration at urmi, while she pretends to be sympathetic when actually she is amused. she instigates him further that he got off easily, by getting rid of him. He says that he would see where he gets to work. urmi plays along with his tunes too. She says that he would definitely get someone to handle the account, with pure trust and faith. samrat says that diwaker would come
begging for work.

Urmi says that they dont really have to do this in the house, as it is good. samrat taunts her why should she do that, and that he provides the moeny and his say would be final, and asks her to stay away from his family. urmi is struggling to say yes, but has no other option. He tells her that she wont give anything to mandira too and thast he wont remind her again about this. urmi is tensed while samrat leaves.

Tauji and rudra discuss how the step that urmi made diwaker take is right, but he sad that the family got torn apart and he never wanted that. rudra is extremely tensed. tauji assures him that nothing like that would happen and that he maybe sad, but this was needed, to change the history forever.

He explains how missing diwaker would make samrat realise his importance, and of relationship too. Rudar understands that maybe this might work.

The next morning, while everyone is having breakfast, diwaker comes with gas stove and cylinder and asks Kanchan where to keep it. All are shocked, and ask them about it. Diwaker says that they would need a different stove for making their food separate. Aditi is frustrated while shashi explains that samrat spoke just in anger, but he clearly explains that he was serious and not angry at all. samrat sdays that Diwaker started it and he would finish. Meanwhile, Amrit is amused. Lies of the Heart 3 May 2020 Update

Shashi goes to taiji for help, and he also asks to let be, as if she is so concerned then she could go to diwaker’s side. Shashi instantly changes side, and tauji and samrat have a good laugh. Kanchan points out indirectly about amrit also being a freeloader, and he instantly leaves to avoid being implicated. tauji is amused. aditi leaves in frustration, while kanchan too goes inside. Lies of the Heart 3 May 2020 Update

Urmi goes inside and says that she never wanted this. He asks her not to go weak and neither let them, as they have a point to prove. Kanchan also makes Urmi understand.

Later, while urmi is surfing through her CD’s, she is taken aback when samrat walks in suddenly. He finds her fumbling in the drawers and is concerned. Urmi says that she would just get water and coffee for him. Meanwhile, the servant comes and tells Urmi that someone has come to meet her. She asks him to seat him, and then she shall come down soon. samrat eyes her as she happily leaves. Lies of the Heart 3rd May 2020

While Asha is making the bed, Gaurav complains of an ache in the waits and she offers to press it. Gaurav remembers his last fiasco with the press and when she assures that she got it right this time, and insists on giving him a massage. he lies down, and she gets on top of
him and stands and presses his waist. while he dozes off, Asha says that she has prepared everything for anu’s would-be in-laws’ place.
Asha also tells that she has arranged for a key and a lock. but he is already asleep. Lies of the Heart 3rd May 2020 Update