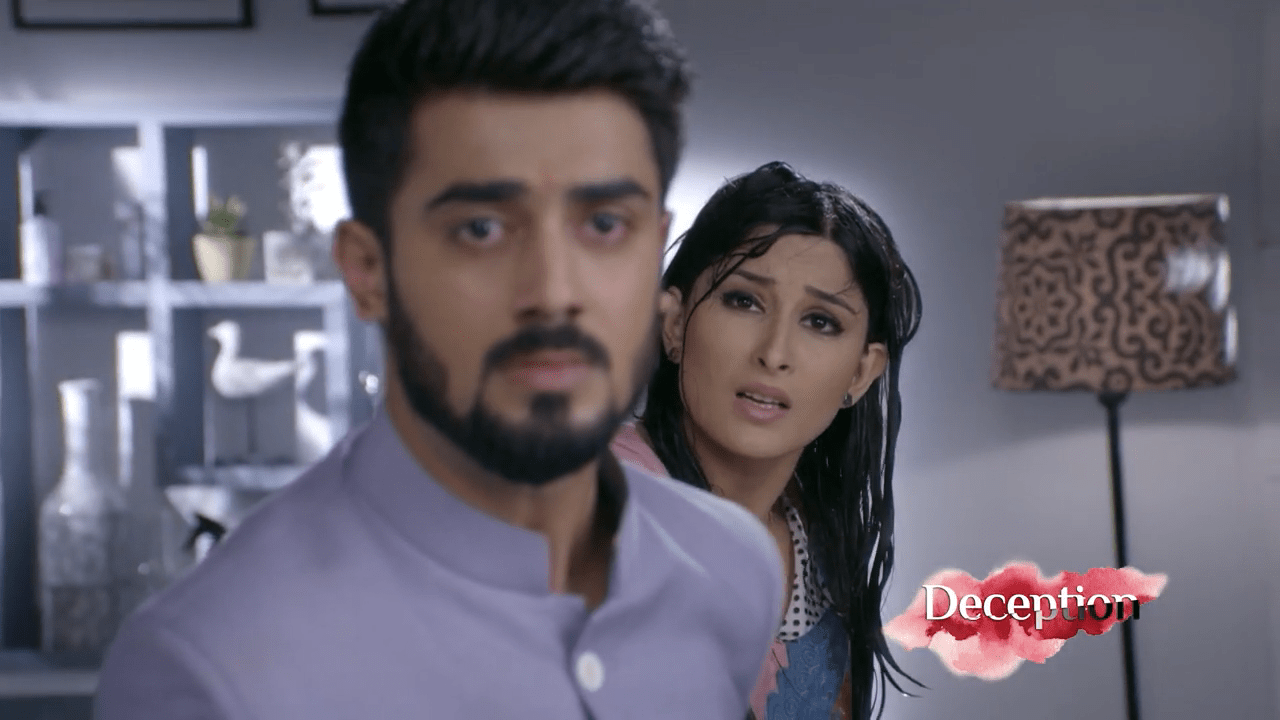 Deception 18 May 2020 Update – Naren gets arrested, Supriya throws Pooja out of the House

The Episode starts with Naren apologizing to Supriya and says I couldn’t save my brother. Supriya says Naren has promised me to keep my heart safe and says Naren can’t break my promise. She cries and asks Naren to stop joking and call Angraj. Naren says Angraj will never comeback now. Supriya calls Angraj and asks him to come. She asks Naren to call him. Naren says my brother is dead. In the hospital, Pooja gives Anuj’s clothes and belongings in Kusum’s hand. Kusum checks his wallet and sees Satish and her remarriage pic inside.

Naren tells Supriya that Angraj can’t come back and says I couldn’t save your heart, sorry. Supriya cries and is shattered. Naren hugs and pacifies her. Supriya cries. Kusum asks Pooja to stop shedding fake tears and says your tears can’t bring back my son. She accuses her for getting her brother killed by her husband. Pooja says Mami…and cries. Kusum says he died while saving you.

Supriya asks how you couldn’t save your brother and pushes him. Harish asks her to handle themselves. Supriya says I got my son back 4 days back and I lost him again. Satish tells Kusum that Anuj’s time was over. Pooja says I couldn’t forgive myself. Kusum says I won’t let your reflection fall on his dead body and asks her to go. She pushes her. Shivani helps her get up. Naren tells that it is difficult to get Angraj’s body. Supriya says he came to meet me and asked to get his last rites done. Harish says we will get his last rites done.

Supriya says I know where is his dead body and says Pooja’s mayka people have hidden his dead body. She asks Naren to bring Angraj from there. Shivani comes and says Mr. Naren Vyas, you are under arrest. Harish asks why you want to arrest my son? Shivani says because he has killed Anuj Gupta. Rahul says what nonsense? He is bhai’s Saala. Shivani says this statement is given by only eye witness and Anuj’s sister and your bahu Mrs. Pooja Naren Vyas. A fb is shown, Shivani asks Pooja to give her statement and asks her to give the statement. She asks who shot your brother. Pooja says Naren has shot Anuj. Harish asks Naren to speak up and say that it is a lie.

Dada ji asks him to say. Naren says Pooja is saying truth. He says I am her brother’s murderer and surrenders himself. Supriya asks Shivani where are you taking him and says I have lost one son and can’t lose other. Shivani says I can’t do anything. Naren says I shot him as he shot my brother. Supriya says Angraj was right that Pooja’s mayka is behind him. She asks him to check angraj in Pooja’s house. Harish asks Supriya not to worry and says I will bring Angraj’s dead body and will not let anything happen to Naren.

Shivani takes Naren with her. Pooja comes home shocked and cries. She looks at the blood on her hands. Supriya comes to her and slaps her. She says you got one son killed and other jailed, and pushes her out of house. Shivani puts Naren in the lock up and asks why did you shot Anuj. She says you shot your Saala, Pooja will punish you before Police. Naren says I don’t want to kill him. Deception 18 May 2020 Update

Pooja sits down on the road shattered and crying. Supriya asks Harish to save Naren and says only he can bring Angraj’s body back. Harish says we couldn’t get his bail before morning. Naren worries for Pooja and asks what did I do in anger. Pooja comes to the Police station and cries. Constable says you have just 2 mins. Pooja gets inside the cell and hugs him. She cries. Naren says Anuj shot Angraj and I shot Anuj in anger. He asks her to tell something. Main jogiya plays…constable says Shivani called you. Pooja goes. Naren cries.

In the morning, Rahul and Harish come to the Police station and bails out Naren. Naren hugs Rahul. Shivani says you can take Neta ji home. Harish thanks her and asks Naren to come home. At home, Naren asks Supriya to have food. Supriya says she will not eat until he brings angraj’s body. Naren says rescue team is searching his body. Supriya asks him to get Angraj’s body from Pooja’s house.

Inspector Shivani comes to Gupta’s house and tells that Naren has filed Police complaint stating that you have hidden Angraj’s dead body. Satish says we are shattered with our son’s truth and can’t come out of the trauma. Pooja says Naren can’t do this complaint and calls him. Shivani shows the copy of the file. Naren comes there in his car. Satish says why we will keep Angraj’s dead body at our house. Naren says I know, but Maa thinks his body is here. Pooja asks why did you file the complaint without talking to me.

Naren says I told Shivani not to file complaint. Shivani says you have sent papers to me and shows the papers. Pooja asks him to tell that it is not his sign. Shivani shows Angraj’s locket and asks what is it doing here? She says I won’t be surprised if I get his body here. Naren gets angry and tells that he will check the house for his body and until he gets angraj’s body, Anuj last rites can’t be done. Mora Piya plays….He goes inside the house and asks Pooja to tell where is Angraj’s body.

Neelima and Surbhi have done the conspiracy and have hidden Angraj’s things in the house. Surbhi says Naren has called us rapist family. They talk that they have signed the complaint papers, but Naren will be trapped. Naren breaks the cupboard and gets Angraj’s ID card. Shivani says his shoes are also here. Rahul is the one who has kept the things in the house and sees Naren and Pooja in his phone. Naren accuses Satish’s family and Pooja of both Angraj and Anuj’s death and tells that if they have shown trust on angraj then this wouldn’t have happened.

Pooja says you are blindfolded and can’t see his truth. She asks Pandit ji to start the vidhi.

Naren says nobody will touch Anuj’s body. Pooja asks him not to do such thing which will bring bad reputation to her sasural. She asks Mami to come and says time has come for Anuj’s last rites to be done. Angraj or his soul come to Supriya and asks her to give him mukti. He provokes her against Naren and Pooja and asks her to go. She tells Dada ji that she is going to Pooja’s house. Dada ji says we all should go and pay our last respect to him. Harish asks shall we present garland to our son’s dead body. Kusum cries infront of Anuj’s body.

Supriya comes to Gupta house and says she will see who will take Anuj’s dead body for last rites. Pooja tells her that Angraj’s dead body is not here. Kusum asks her to understand and let them do the last rites. Supriya acts mad and accuses them for hiding Angraj’s body. Satish says we haven’t done anything. Supriya says if my son doesn’t get mukti then Anuj’s dead body will also not get mukti. She pours kerosene oil on herself. Naren tries to stop her and her that they will do as she says. She agrees and asks them not to do Anuj’s last rites. ‘

Dada ji reaching there and asks Supriya and Naren to stop. He apologizes to Satish and his family. Harish gets angry on them. Kusum asks them to think about them and says they have brought up Anuj since his birth. Supriya says son is son always. Rachel is about to faint. Dada ji asks did you bring me back for this day. Harish says you always care for outsiders. Satish says we are your relatives. Supriya gets angry on them and says you are not letting me live.

Naren asks Danish to take Anuj’s body to morgue and says until my brother gets agni, Anuj can’t get it. Pooja comes back and asks where is Anuj’s body. She sees Naren taking the body to the morque. Naren says you and your family have started this drama.

Pooja tells Satish that she won’t let Naren do this. She runs after the car. Naren recalls Supriya asking them to give Angraj’s body. Jogiya song plays…..Pooja continues to run and falls down. Naren stops the car and looks at her. He thinks of Supriya and son’s love overpower husband’s love and he drives off. Pooja shouts and says you can’t do this with me. She returns home.

Kusum asks where is my son Anuj. Pooja says I couldn’t bring my brother’s dead body back. Kusum says first they killed my son and now not letting his soul get peace. Pooja blames the circumstances and tells that Naren is doing this because of Supriya’s condition. Kusum tells Satish that she won’t let her come near Rachel and says she has eaten my son, I won’t let her eat my grand child.

Satish talks to Anuj’s pic. Rachel’s condition deteriorates. Kusum tells that my son died because of his sister. Pooja assures that she won’t let her brother’s last memory go. Kusum says your brother gave life for you, don’t upset his soul.

Pooja promises that she will bring Anuj’s dead body back in the house. Naren takes Anuj’s body to morgue and feels bad for his doings. He then recalls Anuj shooting Angraj and covers his body with cloth. Pooja and Satish come to the hospital. Nurse informs them that Naren got the hospital and gave them order not to let her go. They stop Pooja. Deception 18 May 2020 Update

Naren asks do you have any idea, you can get jailed. Pooja says it is better for me to die if I don’t do my brother’s last rites. Satish gets a call and says that ambulance left. Naren says I asked the ambulance to go. Dada ji comes and says your Dada’s car is outside. Harish comes with Supriya and says nobody shall move from here. Supriya snatches a gun and aims at her forehead and tells Satish that she will die and he will be blamed. She asks him to return her son.

He says Satish met this Baba often and even on that day. Satish says he is Vaid and I met him for Rachel’s baby. Vaid ji tells that he gives shelter to people and tells that he is not Vaid, and he was asking me about the dead body and asked me to search dead body. Satish says he is lying. Supriya hugs Harish and cries. Rahul cries threatening Vaid on gun point. Naren is shocked and angry with Satish.