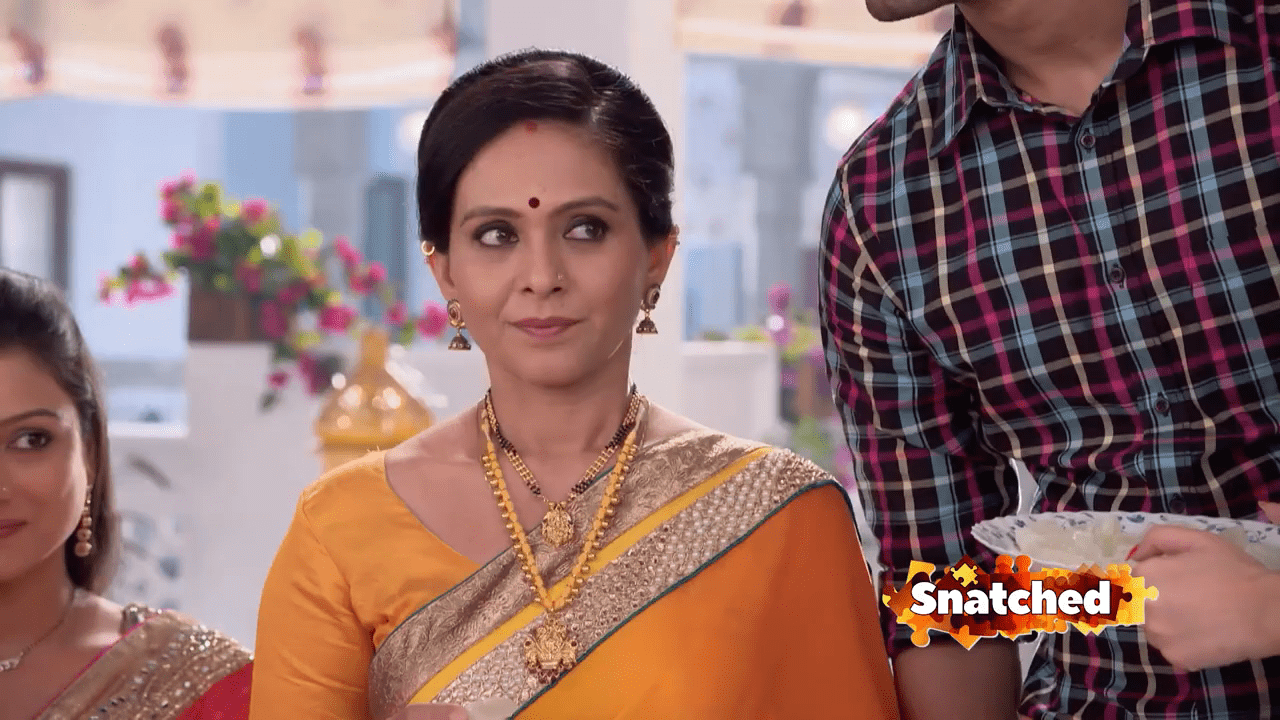 Snatched 10 March 2020 Zee World Update Sanajan comes home she says in temple you know I love Ajay.
Why did you bring ajay in my life? She starts sobbing. Agarwal comes and sees her crying. Agarwal says take this wedding locket off. She says i wont do that. He says you can’t take it off for a moment how will you go away from him? Sanjana says i dont want to go away from him.

Ajay does, he asked me to sign divorce papers. Agrwal says why? she says i don’t know why he is doing this. He wants to end everything. I thought he loves me. She I was wrong I dont mean anythin to him. I did so much for him. Agarwal says dont cry. May i ask you something? Do you love him? Sanjana nods. He says you should listen to what your heart says.

When i hurdled your path you did your heart. now go and make him yours. Don’t you trust your love? Your love can’t be weak? He doesn’t realize you have to make him realize. And this wedding is not a deal, its your fate. Go for the relation you had with him. If your mom were here she would have given you same advice. Just forget what you were for her. He married you with all rituals.

Make him realize. Sanjana says yes i trust my love. Agrwal says thats my girl. Agarwal says go
now sleep. You must be tired. Samar comes to vinati and says please help me in homework. Vinati says i am busy. Shreya says i can help you samar. Vinati says there is not need, go to your room. Shreya says why are you so
mad?

Vinati says we do everything with plan. i know men work hard and i care about the money. Shreya says you think wrong, i didn’t have any intention to prove you wrong. I was just saying that sanjana’s wedding wasted a lot of money. Vinati says you could say that in front of me. Snatched 10 March 2020

Shreya says i am really sorry. Elaichi is watching them. Shreya holds her ears and says i am sorry
it wont happen again. Shreya hugs vinati. Bhushan is in his room. He says where is ajay? Is he done with his work? Bhushan calls chandu and asks what going on there? he says i am cleaning, waiting for ajay. Sanjana came here, Ajay
went out with her.

Bhushan says dont wait for him close the shop. Chandu says okay. Bhushan
says why are you doing all this ajay? You wont change.
Shreya comes to Sanjana’s place. She says you wont ask me in, i will come myself. Sanjana says why are you here? Shreya says not to gossip. bring my stuff, the jewelry we gave you. Maa and papa have sent me. Sanajan says they wont do this ever. Sanjana says bring me the jewelry. Sanjana says i dont need it.

Sanjana brings all the jewelry. Shreya says these bracelets too. She recalls dadi giving it to her. Shreya takes them too. Sanjana says now get out. Shreya says you have got divorce papers, no need of this weddin locket. Sanjana holds her hand and says dont even think. Nothing can break my relation with ajay. I know how precious this wed locket it for me. Dont even cast your gaze on it. Shreya says leave my wrist. Sanjana says now get out. Shreya leaves. Shreya calls her mom and tells her that she has retrieved all the jewelry.

Vinati helps samar with his homework. She says i went harsh on shreya, i should apologize her. Vinati says samar i will be back in some time. Shreya says to elaichi she didn’t agree. I said her that locket is precious to mummy, she shoved me and twisted my wrist. elaichi says met massage it with oil. Elaichi says you shouldn’t have gone there alone. I told you we have nothing to do with all that.

Promise me you wont go there again? Shreya says i promise, i just went to bring that locket. Shreya when i do something good, things aggravate. This morning, vinati.. Elaichi says vinati is still immature somewhere. You are mature. Shreya says i will handle everything i wanna be like you. Vinati is hearing all this. Elaichi hugs Shreya.

Mishri has got a bruise because of slipping. Elaichi asks vinati are you okay? you didn’t eat properly. Shreya says should i make you something? Vinati says no thanks. kirlok says where is Ajay? Ajay comes in. Kirlok asks did you close the shop ajay? Ajay nods. Bhushan says i asked Chandu to close the shop. Ajay says when i came back chandu had closed the shop.

Kirlok says where did you go? Amar says did you complete your work? bhushan says complete it when we
leave tomorrow. He went to meet sanjana. Everyone is taken aback.
Bhushan says he went out with her and left chandu alone with the shop. Kirlok says is he right Ajay? Bhushan says papa is asking about your contract wife. Ajay says she came to sign papers.

Bhushan says show me the papers. Amar says you face tells that you are lying. how many times will you lie? Bhushan says this new ajay can only lie and no one is going to stop him. Papa are you seeing what he is doing? Kirlok says ajay where are those divorce papers? Amar takes it out from his bag. Amar says there are no sign. Kirlok says courier them to agarwal’s place tomorrow.

The next morning, Sanjana receives the divorce papers, she is dazed. Ajay is in the shop. Sanjana calls him and asks what are you upto? busy? She says i just need two minutes. Amar comes, ajay says no i am not interested in this job.

Sanjana says i like it when you lie for me like this. She says i am coming to meet you. i will bring your favorite sweet dish. He says please dont come here. She says tell me where can we meet? he says stop it. She says stop what cooking? He says we our deal is over please sign the divorce papers.

Shreya brings food. bhushan says is it for me only or for everyone? Shreya punches him. Amar gets a call. He says ramnath ji we will deliver your order. He says let me talk to kirlok, if he assures then I will believe you. Kirlok talks to ramnath. He says your order will be delivered. I and amar are same thing. Kirlok says he is an old customer.

Shreya comes home and says where are you vinati bhabhi? She says here in the kitchen.Shreya asks what is papa’s age? Vinati says around 60. Shreya says he looked tired in the shop. I think he should rest for some time. He should take retirement. Vinati says he wont ever do this. That shop is his life. Shreya says his sons are now grown ups they can handle it. Shreya says you should talk to mami ji about it. Vinait says we will talk together. Shreya says no you are elder than me. Vinati says okay i will. Shreya says go then i will do this.

Ajay is stuck in traffic, he goes to the next car and says move your car. Sanjana comes out of the car. He says what are you doin this? Go from here. She says i made you sweet dish. Constable asks them to show papers. Sanjana says i dont have any papers. My husband has all the papers. Ajay says she is lying. she says promise me you are not my husband? Ajay says she is but, the car is not mine. Sanjana says i wont give him car papes until you eat sweet dish. AJay eats it.

Sanjana gives the papers to the constable. Vinati comes and sits with Elaichi. She says mama Ji goes to shop regularly. Elaichi says he never takes a break. Vinati says don’t you think he should get retired? He is 60? He shouldn’t work that hard. He has had a heart attack. He should stay home and spend more time with you. Elaichi says he is going there that is the shop is successful. Snatched 10 March 2020 Zee World Update

Vinati says he has 5 sons. He deserves some rest. He has done so much for us. You should talk to him. Elaichi says i will talk to him lets see what he says. Vinati says if you ask, he will listen.

Snatched 10 March 2020 Zee World Update ends as Elaichi and Shreya are buying the vegetables. Shreya says is there some special occasion in the house? Elaichi says i want to talk to kilrok about something important. Shreya says what is that? Elaichi says i want to talk about his retirement. Vinati suggested me that. Shreya says amar must have asked her. Elaichi says what you mean? shreya says a costumer called in shop, he just wanted to talk to papa ji. Amar didn’t like it. he said papa is here no one listens to amar. So maybe he asked vinati so he gets responsibility of the shop. Ajay says sign the papers. she says i have signed the papers, i will give them once you eat the sweet dish.