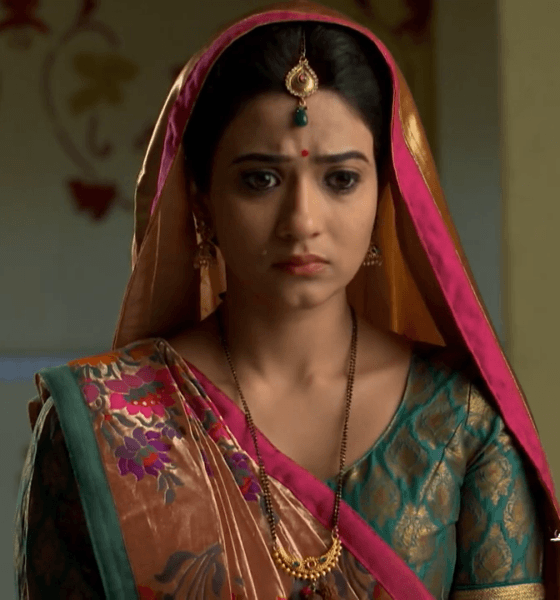 Gangaa 22nd February 2020 Update starts as Ganga brings the coin bag, Shiv notices there were fake coins in it, Shiv questions Ganga what this is. Ganga is clueless. Shiv says Ganga can’t disrespect his mother to revenge him. Jhumki says Ganga gave the silver coins to an old man, she spots her by herself. Jhumki reminds Savitri about it. Savitri says she didn’t know Ganga was giving away silver coins.

Ganga says she didn’t give away silver coins, the old man needed money and she only gave him some money and jewelry. Ganga asks Shiv to trust her, why would she give away the silver coins. Shiv stops the ladies who had turned to leave. Shiv says its Ganga’s punishment to bring back the silver coins within two days, else he would punish her being a MathaDesh. Tears fell off Ganga’s eyes. Jhumki smirks and leave the hall. Riya notices her.

In the room, Jhumki was struggling with vacuum cleaner. She remembers she came to the room and tried to play the vacuum cleaner over everything. She also recalls how vacuum machine had sucked all the silver coins from the bag. She was now worried what if Ganga opens the machine. Riya stood behind her in the room. Both watch the coins come out of the machine. Riya scolds Jhumki for her act and comes to collect the silver coins.

Jhumki goes behind Riya who brings the coin into the hall. Riya says Ganga is right, they must ask Jhumki about the silver coins. Jhumki explains Savitri about vacuum cleaner incident. Savitri slaps Jhumki and asks why she didn’t tell her earlier. Shiv stops Savitri from holding a hand over Jhumki again. He accepts his mistake for mistrusting Ganga, he tells Pratab to make an appointment of the new MathaDesh soon, he no longer holds the ability to make right decisions. Both Shiv and Ganga leave.

In the room, Ganga was crying. Riya comes to her and says she doesn’t need hide her tears. She taunts that she has brought change to Shiv. Today she is hurt only because Shiv didn’t trust her. Ganga says she didn’t need anyone’s trust earlier nor now. Riya tells Ganga Shiv burnt the hands that hurt her, why doesn’t Ganga want to see this. She insists on Ganga to share what’s in her mind.

Shiv has always been her side, because he respects and value her, she asks if Ganga has no feelings for him. Ganga denies. Riya calls her a liar. Gangaa 22nd February 2020 Update – Zee World

Ganga was irritated. Riya says she must think atleast once why Shiv didn’t cross the limits of his relation till today, she must think what she would call what Shiv holds for Ganga. Ganga replies this relation has no name, she doesn’t want this relation to give a name. Shiv only holds her as stubbornness, if it was love whatever happened in past few days wouldn’t have happened. Riya tries to inside Shiv loves her but turns to see Shiv standing at the door. She asks Ganga to think calmly about it and leave.

Shiv apologizes Ganga. Ganga says there must be some motif of his apology, else he never say a sorry. Shiv accepts he has a motivation, to bring her back to normal and happy life. Ganga says she can think about her life well by herself and leave. Shiv wonders when would Ganga understand him.

Riya comes to Kushal and discuss her worries about Shiv and Ganga. Kushal says they must need to do something between them. Savitri comes to Riya and asks why she spoke to Ganga. Riya was sure Ganga would fill Shiv’s life with love, she can’t lose this chance.

The next morning, some villagers come to meet Shiv. Shiv requests them not to call him as MathaDesh and promises to help them with the work. Shiv speaks to Kushal about hiring a lawyer from city. Kushal points there is already a lawyer at home. Shiv wasn’t interested. Riya speaks to Ganga who denies helping Shiv.

Ganga says she doesn’t want to work with Shiv at all. Both Kushal and Riya convince Shiv and Ganga respectively. Shiv sends Kushal to speak to Ganga. Shiv was reluctant to be with Ganga alone in the city, Kushal and Riya promise to come along.

Shiv comes and tells Riya to get ready in the morning, they need to leave for city. Ganga asks if its an order or a request. Shiv says he stated clearly, Ganga was ready. Jhumki insists on Riya to take her alone, Riya asks how she can go when she already proved she is expecting a child. Jhumki torns Riya’s new bag and leaves.On the way, Riya asks Shiv why it is taking so late. Shiv looks around for the way, Ganga searches her phone.

Shiv makes fun of her finding the way through a toy. Ganga instructs Shiv with the way. He finally stops to ask a man about the address. The man instructs them the same way Ganga was. Shiv tells her to keep her phone else the battery would exhaust, Ganga says she already brought her charge. On the radio, a news about two criminals running out of jail into the same area they were in. Ganga shows them the photos on her phone, Shiv forbids her to make them afraid.

Pratab and Jhumki come to Savitri and assures even if Riya and Kushal’s efforts work, they are still there. Savitri wish for a grandchild by Jhumki, and she will get everything named after that child.In the court, Ganga takes care of all the paper work with the lawyer there. Shiv tries to help her but she forbids, as its her own work. The lawyer there asks her to write an application, she staples the application.

A peon comes to office informing two criminals here have hidden in their area, he gets his wife’s call and hurries them. Shiv asks Ganga why she gave him the whole file insisting those papers are the old ones. Ganga thinks for a while and asks for the files back. She takes the file to sign them. The lawyer assures his work would be done soon, he must wait outside.Outside, Riya was afraid but Kushal assures not to be afraid. Shiv allows them to go as he would wait for Ganga. In the market, Kushal hurries Riya as Shiv must be waiting.

Ganga comes out of registrar office. Shiv says he told Kushal and Riya to come soon, he complains girls take a lot of time in shopping. Ganga was offensive. Ganga thinks about calling them and goes inside to get her forgotten purse and mobile. Shiv says he would leave her if she doesn’t return soon. Shiv watches everyone running on a side, then notices two suspected men entering the building. Inside, a peon informs Ganga he submitted the purse upstairs already.

Gangaa 22nd February 2020 Update The criminals enter the building and intimidates the other to bring out a gun. They decide to stay in the building for night and head to cut the electricity.Ganga finds the door locked, Shiv brings her purse along. Shiv hurries Ganga outside. Ganga slips and Both Shiv and Ganga fell down. They get up. Shiv calls Kushal but the phone disconnects. Shiv notices there wasn’t any battery. Ganga suspects someone’s presence. Shiv was alert.