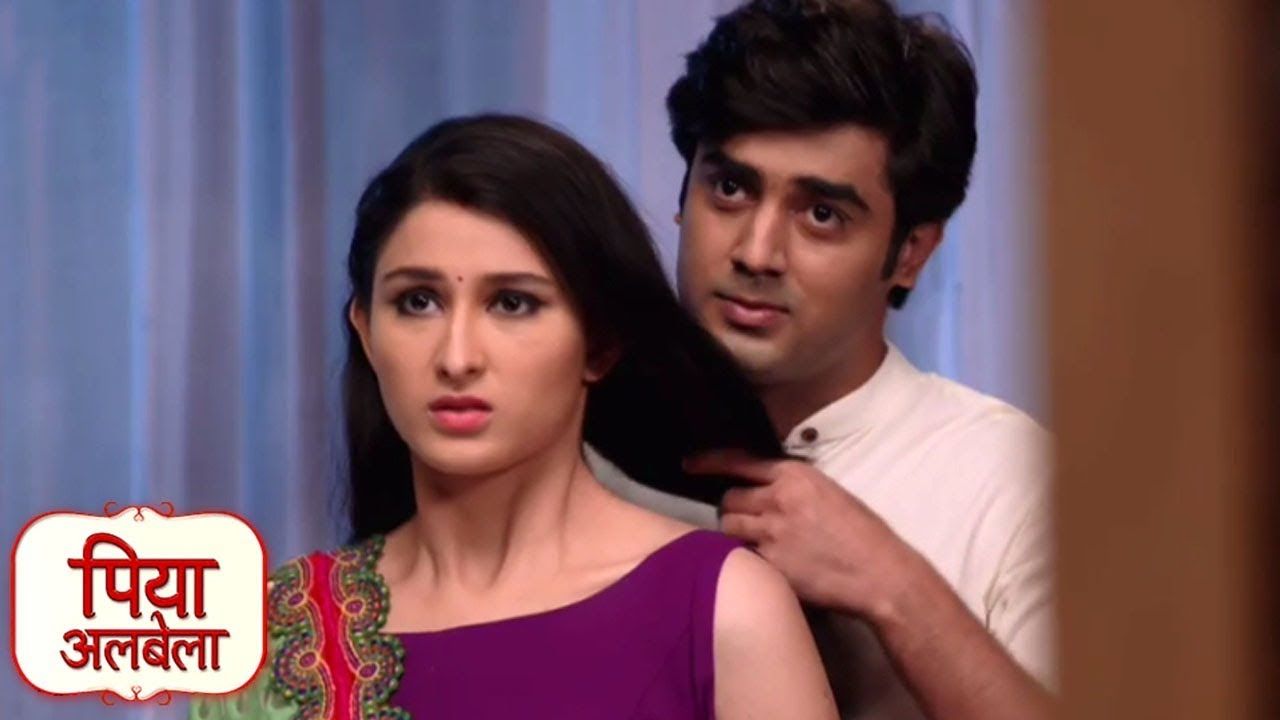 Deception 20 February 2020 Update starts with Neelima asking Supriya to go to Mumbai to attend their client Desai’s son wedding. Supriya says how we can go leaving Naren and pooja alone. Neelima says Pooja is not new and asks her to get Harish checked with a good cardiologist.

Supriya says she will talk to Harish. Neelima says she got morning tickets booked and asks her not to think. Rahul appreciates Rakesh for targeting at Naren’s heart and says you are romantic. He says 100 crores is ours now. Neelima says he will hit axe on his leg. Pooja thinks she got message from Supriya that they are going to Mumbai.

She looks for Naren’s pic and thinks he might be waiting for her message and is upset with her. She thinks to send him many messages. She sends him message that she loves him very much. Rahul comes there and thinks Bhai has gone mad. Naren thinks to call Pooja.

Just then Rahul comes there and asks the reason about his happiness. Naren says he asked Pooja to give him gift, and she just gave. Rahul says in message.. He asks him not to send pots to her again and asks him to gift her something which will stay with her for forever. He shows the brochures of a property on highway and says booking amount is 25 thousand. He says he is booking for Surbhi. Naren asks why Pooja needs this house.

Rahul says it is husband’s duty to secure his wife’s life. Naren recalls Satish’s words that he wants to be sure that his heart will always be on Pooja. Pooja calls him. Rahul doesn’t let him pick the call and gives him blank cheque to sign. Pooja thinks why he is not picking the call. Naren is about to sign on the cheque. Suddenly the pot breaks at Pooja’s place. She gets worried and thinks something wrong is going to happen.

Rahul shows the cheque to Neelima and Rakesh. Rakesh says very soon 100 crores will be ours. Naren rejects Pooja’s call and thinks to take her to show surprise. Surbhi talks to her mum Shilpa and tells her that Rahul refused to come to New York. Shilpa says he is not Naren and asks her to handle him wisely. Surbhi sees Naren taking Dadaji’s blessing and telling that he is going to bring her beautiful flower home. Surbhi says you are right now, I have to handle Rahul my way.

Rachel talks to Kusum and says bad thing happened with Pooja. She says everyone is laughing on us and saying that he made garden outside our house in just 4 days of marriage. She says he shall stay in a wonder house. Pooja hears her and says whoever don’t understand him talks such things and says my husband loves me very much. Kusum says we have to stay here in this neighborhood and this is not love, but madness.

Pooja asks why did you come so late at night. Everyone go to Pooja’s room along with neighbors. Neighbors taunt them. Satish and Kusum scold Naren.

Naren says sorry and says today he came to surprise pooja. He says he has booked a house for Pooja to secure her future. She says this house will be on Pooja’s house and you all can stay there whenever you like. They get impress with him. Pooja recalls Satish asking her to keep distance from Naren for two weeks and gets tensed.

Rahul says he went to show the dreams of house to Pooja. Neelima says that house will never be built. Rahul tells that zero has no value, but it will change Harish’s destiny. Neelima smirks. He adds zeroes and says now 25000 will be 25 crores, and says how bhabhi ji will save her husband and inlaws.

Pooja says now I understood why you were not picking my call. She acts to be upset with him. Naren looks at her and says I am seeing if you can act well to be upset. Pooja smiles and says she is really upset. Jogiya plays…Naren says from today he will not give her a chance to be upset and says this will be your dream house. Pooja says our dream house…..Yeh Moh Moh Ke Dhaage plays……He looks at her lovingly. Pooja feels shy.

Next morning, Satish is tensed. Pooja thinks how to tell Naren that he has to go alone even today. Naren asks Satish if he can take Pooja now and assures her security. Kusum comes and says you can take her back, what she will do here. She says if Pooja stays here then you will enter here as thief and will cut our nose infront of neighbors. Naren apologizes. Satish asks Naren to let her stay with him for 2-4 days. Kusum says you are saying as if she is going to mangal grah and asks Pooja to pack her bags.

In the room, Satish tells Pooja that he was stopping her as he is worried about her and Naren. He asks her to keep his trust and asks not to tell anyone. Pooja asks if he is hiding something from her.

Pooja ask Satish if he is hiding something. Satish says no and asks her to go as Naren is waiting. Pooja goes. Satish thinks until he gets solution for the dosh. Pooja comes out and sees Naren standing with cycle. He tells that taxi punctured while he was coming and then took cycle on rent to reach here. Pooja asks if we will go on cycle, we can book taxi also. Naren asks her to come on cycle ride.

Pooja agrees and says you don’t need to ask me, I will come wherever you want me to come. She says she needs an answer first and asks why your vehicle betray you always. Naren says it gets upset whenever the thing is about you. Pooja smiles and asks lets go Naren. Naren asks her to take his name again. He rides the cycle with her. Sab tera song plays…..

Neelima asks Rahul what happened? Rahul tells her that officially Harish and his family are bankrupt now, and they will come on street now. Neelima says Pooja have to give us 100 crores to save this house. She says they got Power and money which they deserve. Naren plans a life with Pooja and says we will not have TV at home, as they shall spend time with each other. Satish thinks Pandit ji told that 2 days are risky for Naren and prays to God to protect him.

Kusum gives him tea, and the tea cups breaks.. Satish gets shocked. Naren and Pooja are having an eye lock. Suddenly a car comes infront of them and they fall down from the cycle, but get saved. People gather there and asks if he is fine Naren and Pooja says yes. They stand up. Naren says cycle is not working now. Kusum asks Satish to say what is the matter. Satish is tensed. Kusum thinks what is the matter? Naren tells Pooja that somebody told him that shopping uplifts girls’ mood. Pooja says we will buy some stuff for our home.

Naren and Pooja buy the stuff. Supriya and Harish come back home. Supriya tells Neelima that Harish got unwell in Mumbai and that’s why they returned back. Hardik says we shall show him to doctor. Supriya says we started his treatment and next week we have to go to show him to doctor.

Neelima asks him to go and rest, and says today they will enjoy and do dawat at home, says don’t know if we will have get together again or not. Supriya prays to God. Pooja tells Naren that her clothes is dirty, how to go home in this dress. Naren says he will fulfill her wish. He takes her to shopping mall and buys dresses for her. Mora Piya Albela plays…He selects dresses for her.

Supriya asks Neelima why did she make the arrangements. Neelima says we shall enjoy until we have servants, and makes Harish have the first bite with her hand. She thinks from tomorrow you will not have this. Supriya asks if everything is fine. Neelima says yes. Just then Harish gets a call and is shocked. Neelima smiles. Naren buys shirt of Pooja’s choice and tells Pooja that his wallet is empty now.

Naren and Pooja return home. Supriya asks where did they go? Naren tells her that he took Pooja for shopping and she emptied his wallet. He says he brought bed sheets, crockery, whatever she liked. He shows the keys and asks her to put their new homes keys in it.

Supriya asks what? Harish comes with Neelima and Rahul and slaps Naren hard. Supriya asks what you are doing. Harish asks what shall I do, that a son have made his father bankrupt and booked a house on his wife’s name without checking the authenticity, and signed cheque of 25 crores for a fraud company.

Naren is shocked and goes to Rahul. He asks Rahul what is this? I have signed 25 thousand cheque. Rahul says you have signed the cheque, booked home and asks why you are blaming me. Naren says I remember well that the cheque amount was 25000. Rahul asks why is he shouting and asks if the fraud company is of his father.

Neelima scolds Naren and says you should have been careful, and tells Harish that Naren went to Dehradun to show property papers to Pooja. Rahul says now Tawo ji and his family are bankrupt, what they will do. Harish asks Naren what he wants and asks from where to get money for payments. He asks him to kill him.

Deception 20 February 2020 Update Supriya and Pooja stop Harish. Harish says he don’t want to see her, and curses the day when he brought her home. Harsha comes and says who have thought that she is so cunning behind innocent face. She asks what did you get by doing this. She says you have trapped Naren. Supriya says you can’t talk to my bahu like this. Harsha says one day she will take Naren with her, and betray us.

Pooja is shocked. Rakesh smirks. Harsha says this key chain is a way to snatch the wealth. Rahul tells that Naren is changed and blames him. Pooja asks why you are accusing Naren and says you are behind the fraud company. Everyone is shocked.