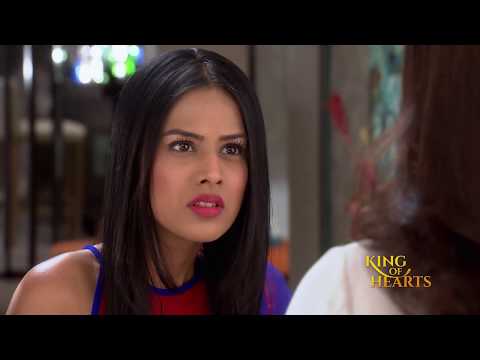 King of Hearts 3 December 2019 Zee World Update The family is having breakfast. Sid walks in and begs Naina to forgive him for what he did. She says she has forgiven him. He says he and Anya decided that all of them should go on an overnight picnic. Mittul says it’s a good idea. Sid says he and his father bought a new farmhouse and would want all of them to see it.

Neel says he won’t be able to come. Sid says he knew Neel would say that. He says he wanted them to play cricket but he thinks Neel is afraid to play. Neel says he and Ragini will go. Sid is happy. Mittul is in the kitchen having mangoes and throwing the skin on the floor.

Her husband walks into the kitchen and slips on the mango skin. He moans in pain and says he won’t be able to go for the picnic. Mittul says she has to go. The doctor attends to Mitul’s husband and tells him he can’t go to the picnic. The rest of the family goes to the farmhouse for the picnic.

Anya tells Sid that Arav is getting better. Sid says they have to go to the next part of their plan and that is to make Roshni see Neel failing at something. Anya reminds him of Aunt Mittul. They see Mittul approaching. Anya starts praying. Mittul asks her what’s wrong. Anya says since their engagement, things have been going wrong and she prays they can go home without any hitches. Mittul agrees and says she has to ward off the evil eyes.

Naina asks what’s wrong. Mittul tells her things have been going wrong. Naina tells her not to worry about such things.Sid tells himself that Mittul is part of his plan to win Roshni back. Everyone is in the garden having a picnic.Anya asks if anyone wants spicy noodles. Sid tells her to have no fear when Sid is here. He gets some candles and lights it then he puts an aluminum bowl with noodles over it. Neel tells his mother that Sid is quite resourceful.

Roshni watches him and remembers when he did that for her.Sid flirts with Anya and Roshni stares at him sadly.When the noodle is ready, Sid feeds Anya some and Roshni continues to remember.He asks Roshni for the tomatoes paste.Roshni goes inside to get it.Sid says he has to go in and get plates.He enters and sees Roshni.

She gives him the tomato paste. Sid says Anya likes spicy food but Neel likes everything bland. Mittul decides to go and spy on Sid and Roshni. She enters the house. Sid stares at her then picks up the plates and goes outside. She tells herself that something is wrong. Outside in the garden, as everyone eats, Sid continues to flirt with Anya. Anya tells Sid that he can see it’s all getting to Roshni.

At night, Anya suggests they play dumb charades. Neel tells Anya to divide the teams. Anya puts Sid, Roshni and  Mittul in one team. Roshni goes first and Sid is supposed to guess. He is unable to guess. She pulls him up and acts out the scene on Titanic with him, holding her hands out with her back turned to him. Sid says ‘Titanic. She screams in excitement and hugs him, telling him he’s the best.Neel looks on.

Roshni stutters and sits back down. Sid tells himself that she didn’t say what she wanted to say but he knows what it is and he loves her too.Anya tells Roshni that she’s not supposed to use someone in the game and she used Sid. It’s Sid’s turn.He signs ‘A Love Story’ but Roshni is unable to guess it. Neel gets it. It’s Anya’s turn and Roshni gives her a word to act out.Neel gets it.

Naina says she has to go to bed.She leaves.Roshni says she is also tired.Neel says only his mother will sleep outside while the rest of them sleep outside.He says he can do fun stuff too.He and Sid set up the tents and he assigns them to everyone.Sid says he and Roshni have the same coloured tent.

Roshni says she wants another tent.Neel assures her that she has the best one.Sid flirts with Anya before she goes to bed.

In the middle of the night, Roshni’s tent collapses.Sid goes to help her out and she clings to him.Everyone wakes up and Anya accuses Neel of not setting up the tent properly. There is a flashback of Sid messing with the tent after Neel fixed it.Mittul talks about the evil eye and Sid tells her it’s nonsense. Neel takes Roshni inside the house.Sid discreetly drops a piece of paper at Mittul’s feet.

He tells Anya that they should go and sleep inside. Mittul sees the note and picks it up. She sees the phone number of an aura healer.Next day, the family is back home. The doorbell rings and Naina answers the door. Bunty walks in disguised as an elderly necromancer. He says he’s an aura cleanser. Neel asks why his mother called him. Mittul says he’s the one who called him.

Bunty walks up to Sid and says he’s a great man. Roshni gets suspicious of him and says it seems she has seen him before. Bunty insists he’s just an aura cleanser. He says something is not right with the house so he needs to cleanse every room. Neel and Roshni leave for the office. At the office, Roshni briefs her team on how to handle the photoshoot. Neel takes photographs of her as she’s working. King of Hearts 3 December 2019 Zee World Update

Sid stares at Roshni. The photographer for the job tells Neel that he did a good job. He tells Roshni to move away so he can work. As Roshni walks away, she trips over a wire. Sid rushes to hold her so she doesn’t fall.

Later on, Roshni tells Neel that the photos are really good. Anya tells Neel that things have been going wrong and she thinks they should have a prayer session at the house. Neel says he doesn’t understand why everyone has become superstitious. Roshni says she agrees with Anya, Neel says they can go ahead. Roshni says it’s getting late so Anya and Neel can go while she works late Neel asks if she’s sure. She assures him that it’s fine.

Later at night, Neel comes with a restaurant menu and hands it to her. He is dressed as a chef. She orders for a cappuccino and he gives it to her. She asks why he came back. He says he came to have coffee with his fiance. He touches her face and she pulls back a little.He says she says one thing but her face says another. She asks what her face says. He says he will tell her sometime. King of Hearts 3 December 2019