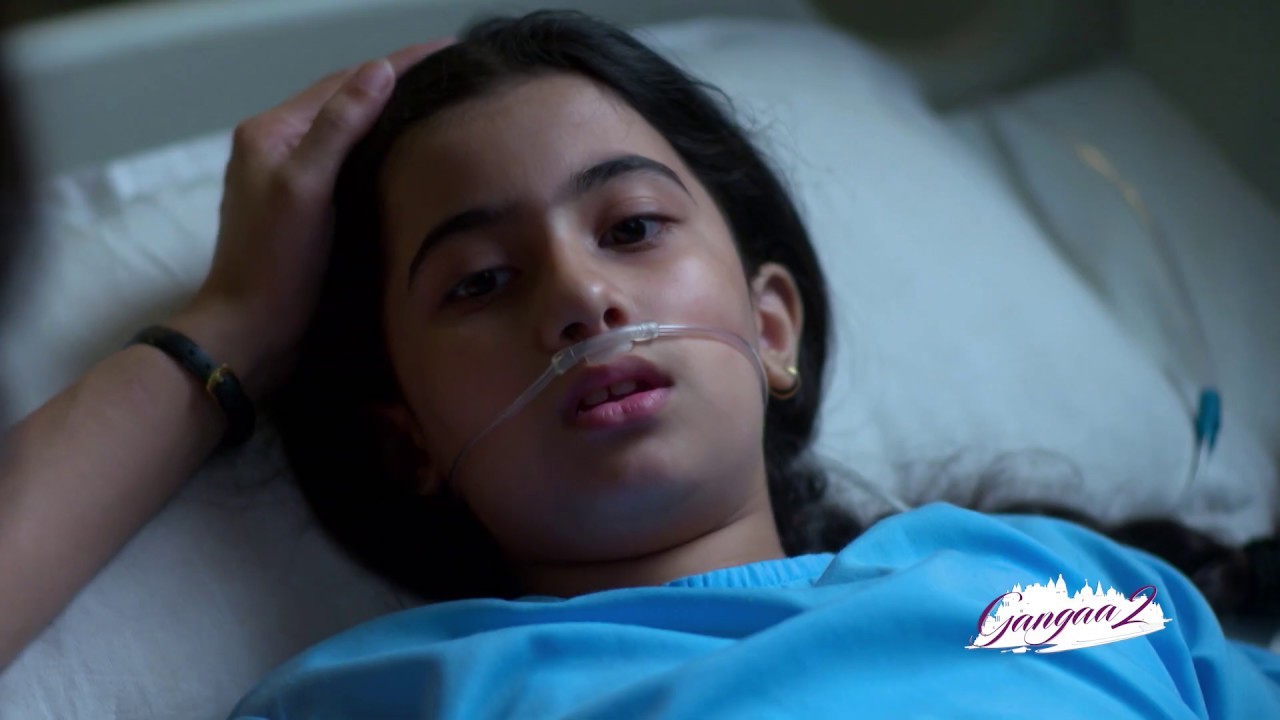 Gangaa 8 December 2019 Update on Zee World Ammaji is very happy to find Madhavi and Sagar who have returned back and says that she always knew how he wouldn’t be able to stay away from her. she continuously tries to get herself assured, that they won’t be leaving now, and this isn’t a short stay, but they have decided to permanently stay back here. Zoya hears this and is enraged. meanwhile, Niru passes by and is shocked to see them, as he eyes the scene unfolding at a distance. she says that she knew Sagar knows she would die once he leaves.

Sagar asks her to shush and reassures that he is here to stay. He says that he won’t go till he gets the answers to some of his questions that life has posed right now. she is boggled as she doesn’t understand. she says that she doesn’t know what prompted it, but she shall always be indebted to him, for this act. she then gets Niru, and asks him to stop this hatred, has it been enough, and asks him to hug his son. But Sagar refuses to say that he cant mend every broken thing, particularly not trust, and hence she shouldn’t try in vain, as she looks up expectantly.

Niru stands tensely, while Sagar hastily rushes inside. she tries to calm and compose Niru and asks him not to bother. Niru goes in too. Madhavi stands tensely with Ammaji. Zoya is frustrated.

On the roof, sagar is extremely tensed and nervous, but smiles when he remembers his past moments with ganga. Meanwhile, Zoya calls up Sonu, informing him of the latest trend. he taunts that she lost her dream now, as sagar and pulkit shattered her dream to pieces. he continuously smirks, but she says that this cant be, as they have to do something together. seeing that he isnt complying, she apologises and tries to emotionally manipulate him, as to how much she misses him, while he is totally drunk and inebriated and falls for her trap. he asks her to think how to reinstate him back. she says that she would finalise everything.

Ganga is tensed as she remembers what all happened since morning, and cries as she sees krishna, who is still unconscious. she finds sagar sitting on the other side of the bed, caressing her face, and trying to cheer ganga up. she gets overwhelmed with tears and when she reopens her eyes, she realises that she had been hallucinating, and gets emotional yet again. she hugs krishna.

Sagar calls the hospital, and gets to know that krishna has already been discharged. when he asks why they allowed when she was so sick yesterday, they inform that ganga being headstrong, took her home insistently. he says that she is like that and then asks if a private nurse was arranged for. after being satisfied with his queries, he cancels the call. he wonders what to do, and how to meet Krishna, as the way ganga refused, she wouldnt allow.

Madhavi comes asking if he cares so much, he should simply go and meet. he denies. she gives him his father’s diary containing ganga’s number. she gives it to him, but he hesitates, saying that ganga wont comply. she asks him to remember that things should be handled when there is time, or else later only regret remains. he is set to thinking while she leaves him in solitude. he wonders why is he in so much pain, and still thinking about ganga and krishna, even after he distanced himself from her. finally he gives in, and dials her number.

Meanwhile, Krishna is fed by ganga, when she asks questions about when would she be okay. kashish too comes to cheer her up, and asks her to be brave as she is, and not be scared of the pain, and soon she would be okay. she asks her to get fit soon, so that she can play easily. they both try and cheer her up, while she asks why does it pain before everything gets better. they explain with analogy, as to how the best results only after the biggest and bravest of struggles, as its god’s way of testing who can bear more pain. As the phone starts ringing, it goes to her voicemail, which is by Krishna, and he starts narrating a message for Krishna, referring to her as Gauraiya, and asks how is she, and talks about how he is attached and connected to her.

he is totally oblivious that Ganga has picked up at the last minute, and is listening to it. she is appalled as she hears Hagar’s outburst. he says that he doesn’t know if she is his daughter or not, but he desperately wishes to have one like her, which is exactly what they had wanted, but suddenly something happened, that shattered their dreams and changed everything. he pours his heart out, as to how he is still angry at Ganga, and doesn’t want to dwell on the past, and doesnt know how much she knows, but right now, he wants to hug her, and tells her that she means the world to him, despite having any connection, and how he wishes the world’s happiness for her. Gangaa 8 December 2019 Update on Zee World

You May Like This:  Gangaa 3 December 2019 Zee World Update

He says that he tried hard to fight his feelings, but cant anymore, and wants her to be his daughter. ganga speaks up sternly saying that krishna shall never call him, nor would she ever be called as krishna’s daughter. she asks how dare he try and talk to krishna, and reminds him to go back, and that he isnt related to her. she asks him why doesnt he understand, and asks him to stay away from krishna, and asks who gave him the right to say all this to krishna about the past and asks him not to even try again to tell her about it. she says that Krishna’s life doesnt have space for him. she says that he intends to use krishna’s sickness to get into her life, but she wont allow it this time around. he is appalled.

Ganga says that she shall never let him hurt her, and asks him to go and let them live in peace. he says that he tried but couldnt, and says that she knows he has stayed back for her and krishna. Sagar asks her to name the father of her child. ganga stands apalled listening silently. he says that he is in a big dilemma, and how only she can draw him out of this, and asks if he is the father of krishna. she cancels the call. He stands frustrated. as she hears from a distance, ammaji is shocked to hear tht krishna is sagar and ganga’s child together. ganga remembers their conversation and krishna’s search for her father and is tensed. Gangaa 8 December 2019 Update on Zee World

Krishna is insistent that she wishes to go out, despite kashish trying to make her understand otherwise, that she isnt well yet. she calls for ganga to assuage the situation. ganga composes herself after te call and then adds that she is coming. she then gets to know that krishna wants to go outside. kashish vehemently denies. but ganga stops her, and then tells krishna that she shall take her, the private nurse is tensed too.

Kashish is boggled, as to how can krishna be taken outside, in such weakness. ganga asks her to quieten with her eyes. krishna asks if she would really take her out. ganga complies as she starts taking off her IV veins. kashish watches resignedly. Gangaa 8 December 2019 Update on Zee World

while sonu and Zoya are plotting their move, ammaji comes and hurriedly asks him to take the car out, and then gets sagar to come out too. he is boggled but still follows.

Ganga takes krishna to the temple, and while they are praying, ganga wonders that what she plans to tell krishna today isnt the exact truth nor the exact false, as she did agree for the lord to be her husband in childhood, and the other truth that she intends to hide, is that whenever she saw the lord, she always saw sagar’s face in it. she tells her that Lord krishna is her husband and her father. krishna is boggled. ganga asks her to name lord krishna, the next time anyone asks her, and if she misses her father, sh can easily come here, near him, as she would feel good. she says that people dont care for relations, but not the lord, as he never turns their own children away, as they have immense love for their offsprings.

She asks Krishna if she understood. she smiles and complies. she thinks that krishna is everyone’s father and hers too, but like everyone has a father, she has one too and wants to know about him. she says that she knows ganga isnt saying the entire truth and is hiding, but this time she wont ask, as she always gets upset when she does that as she has bothered her enough, but requests her to make her meet her father, and begs for one clue, as to who is it, and then she can easily search for him. she smiles as she gets an idea, and then Ganga starts walking out with Krishna. Krishna reminds in her mind the promise, that krishna made to make her meet her father.

Meanwhile, Sagar arrives with Ammaji at the same temple, who is boggled, as to why they are here, while she adds that they shall soon know. as they rush out, krishna and ganga confront sagar and ammaji who are just going on. they al get emotional. ammaji remembers sagar’s conversation yesterday. krishna finds sagar’s face in the temple, replacing krishan’s idol, and wonders if god is trying to give her a signal, that sagar is indeed her father. MEanwhile, Ammaji asks sagar, as they stand in front of the temple, asking him to just tell her once, if krishna is his child. sagar speaks up that krishna is indeed his child. she is overwhelmed, while he is himself emotional at this new found revelation. Gangaa 8 December 2019 Update on Zee World

The main cause of Balogun market fire outbreak today (Photos)