The Heir 11 November 2019 Update – Amba drives the jeep and dragging Raj on the ground. She dumps Raj to his house. Amrit gets a shock seeing Raj’s injured state. Raj says Preet….. Raj and Mannu cry. Judaai…plays…. Jagan says it will be tough to break Raj and Mannu.

Chandar says Amba will do our work, she will separate them. Babli comes to give food to Mannu. Gunjan and Aman knock the door. Everyone comes. Gunjan asks someone to get the keys of the lock. Amba comes and asks whats happening. Gunjan says you are burning preet’s life in enmity, she is feeling caged here, she is finding her freedom.

Amba knocks the door. Gunjan says Simran has faced this, same thing is happening with Raj and Preet, don’t know how is she, if anything happens to her, you both will be responsible. Amba says I can do anything, how can you blame me.

Mannu opens the door and comes out, wearing Raj’s coat. She says I m not so weak to end life, Raj’s love strength is enough to keep me alive. She takes the food. She says I have to live for Raj’s love, I told you mummy, you can’t separate us, see he is with me, these clothes have his essence. Amba asks what nonsense. Mannu goes to her room. She says Raj is mine and I m of Raj. Amba worries.

Rohan takes care of Raj. Raj says I can’t live without Preet. He gets up to go to meet Mannu. Rohan stops him and says he thinks they will leave him, Simran made me fall when I was going to save him. Raj says Preet said she loves me, she accepted me, I have won, now none can separate us. Rohan stops him. Amrit says let him go, love power is bigger than physical power, Amba will lose by their love.

She asks him to go and get her bahu. Mannu thinks of him and cries. Raj comes there and shouts I have come. Guards catch him. Mannu gets shocked seeing Raj. Amba scolds him. She goes to beat him. Jagan smiles. Manny beats herself and asks Amba to beat now. Amba beats Raj. Mannu beats herself and cries. Everyone gets worried seeing her madness. Amba stops.

Amba leaves Raj. Mannu hugs Raj. Amba asks them to leave, they can’t tolerate them. Mannu says truth is I love Raj, and I m your daughter, I can’t leave both of you, this is not a deal to choose by convenience, its a relation to keep, Jagan has come back from jail, Chandar is planning while sitting in jail, don’t support me, we will outside the house to support you till you accept us. Amba says I don’t need anyone, I will never accept you. Mannu and Raj leave. Amba shuts the door on their face.

Ladies find Amba’s decision wrong. Jagan says its called Kalyug. Raj and Mannu see their wounds and cry. He apologizes to her. He says I always want to become your smile, but I become the reason of your tears. She says you are not wrong, situation is wrong, one day Amba will trust our love. They hug and cry. She says you would be hurt. He says so what, I got a medicine too, you…. Tu safar mera…..plays….. They get close. She gets away. He says you kissed me in front of everyone and now you are getting shy. They feel the paining wounds and laugh. Simran sees them.

Raj and Mannu do the aid to their wounds. Simran goes. Raj says we are really mad. Amba sees Mannu’s childhood pic and recalls the childhood moments. Waaris…..plays……….. she says you were my Mannu, you failed me. Simran says decision didn’t happen, Bajwas are our enemy.

Amba says I don’t care for enemies, I lost to my Mannu, she failed me, she has beaten herself when I have beaten her, her hand was bleeding, how could I see the wound marks. Simran says I have seen them, Preet has gone mad in love, we can’t separate them, she won’t leave Raj, but if Raj leaves Preet, if we think of something to do this, she will come to us. Amba says yes, there is a way, I will tell you.

Its morning, Raj wakes up and looks for Preet. Someone comes to him. Mannu comes and thinks where did he go. Amba does the aid to Raj. He asks what do you want from me.

Mannu looks for Raj. Amba does Raj’s aid and talks sweetly. She asks what does he want. He says I just want Preet, I love her. She asks what value does Simran hold in Rohan’s life. Babli says Amba took Raj inside. Mannu gets shocked. Raj says Rohan changed because of Simran, what do you want from me.

Amba says you have to leave Preet forever, promise you will leave from her life, you won’t marry Preet again. He gets shocked. She says there will be no problem, just think about it, can’t you give a sacrifice for your brother. He promises he won’t marry Preet again. Mannu comes and hears him. She asks whats this promise. Amba says I told him once to leave you to unite Simran and Rohan, he is selfish and left you. Mannu asks Raj not to promise her, she is lying, she will not unite Siumran and Rohan, did you not think of me, you can’t do this. They hug and cry.

Raj says I m not doing wrong, I know Amba will never let Simran and Rohan unite, if my mum asked this to you, could you refuse, no right, its children’s duty to fulfill mum’s wish, I m just doing my duty. Mannu cries. Simran looks on. Raj asks Mannu to take care and goes. Mannu says this is my Raj, he is ready to sacrifice love for you, how can you be so selfish, you are making him away from me, my soul will go with him, you can’t stop it. Mannu runs and hugs Raj. They cry.

Chadariya….plays….. Jagan and others look on. Mannu says Raj promised he will never marry me, it doesn’t mean we can’t stay together, marriage means two souls union, our souls have united before, no vows can separate us. Amba scolds her. The ladies support Preet. Mannu asks Amba to say. Jagan says your daughter is not in your control, if panchayat sees this, you can’t become Shah, stop Mannu here, keep Raj as servant. The Heir 11 November 2019 Update Zee World Series

Jagan says Amba agreed to keep Raj here, but he will stay as a servant. Mannu gets angry. Raj says fine, I will return even after death to stay with Preet, this is a small thing. Gunjan hugs Mannu. Mannu warns Jagan.

Jagan meets Chandar. He says Panchayat is going to come. Chandar says have this drugs, welcome panchayat by this, this will make people ill, Raj, Preet and Amba will lose, I will be free of this jail, now our rule’s new phase will start. He laughs. 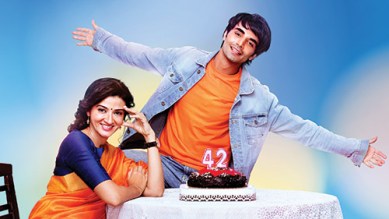