Candidate of the Peoples Democratic Party in the Kogi West Senatorial election, Dino Melaye, has called on the Independent National Electoral Commission not to accept results from polling units where ballot boxes were snatched.

A cascade of gunshots in central Lokoja, Kogi State, has dispersed people waiting for results in polling units

3:09 pm – Bayelsa: Protests at Opolo
Protesters at Opolo, Yenagoa. They alleged that election didn’t take place in the area. That some thugs disrupted the process 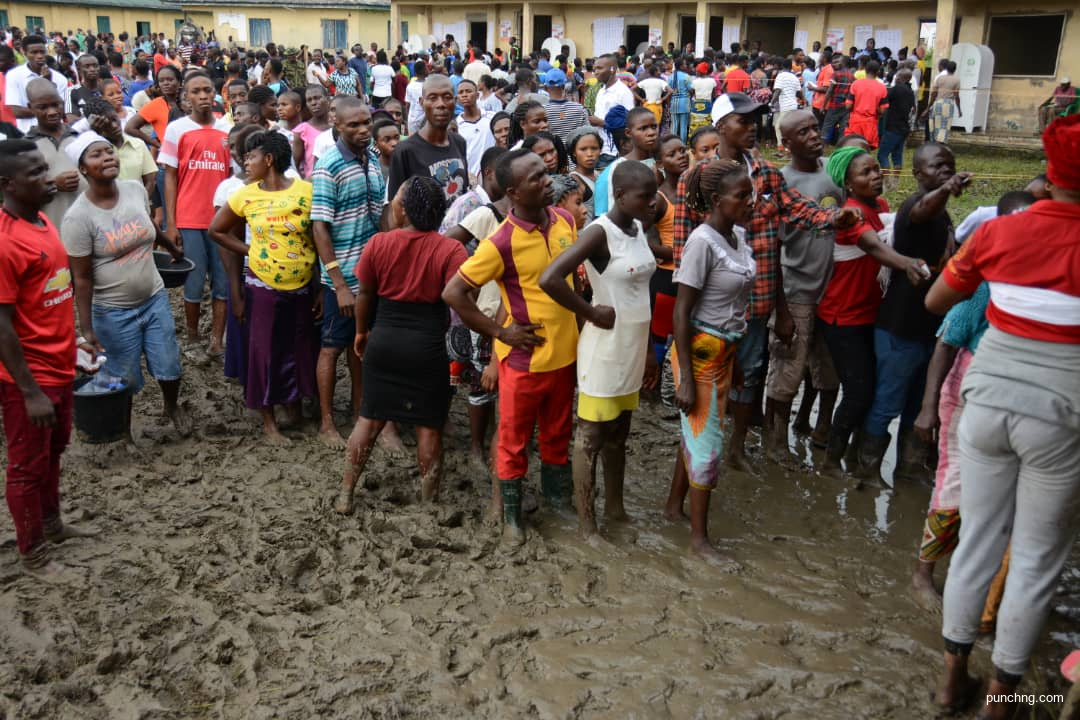 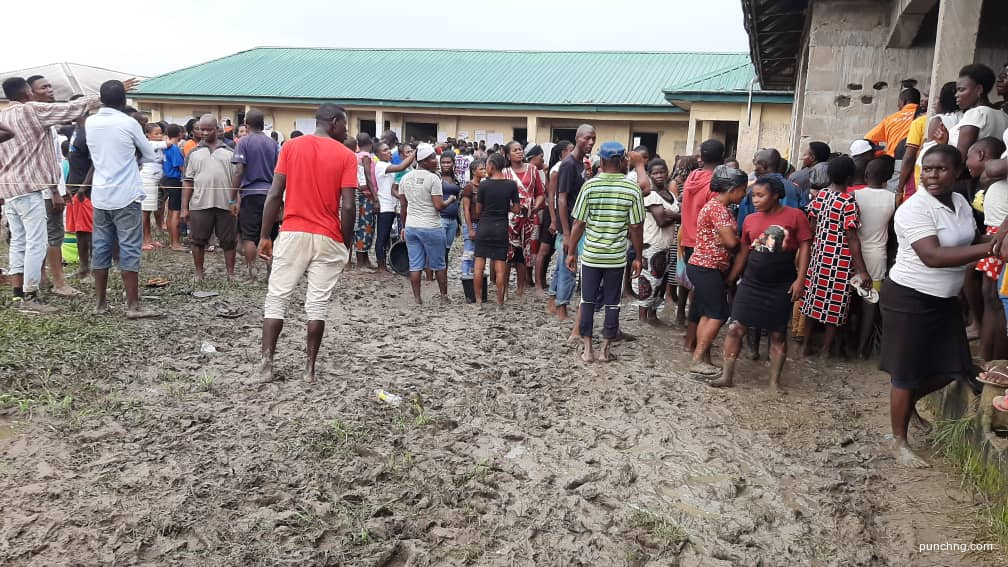 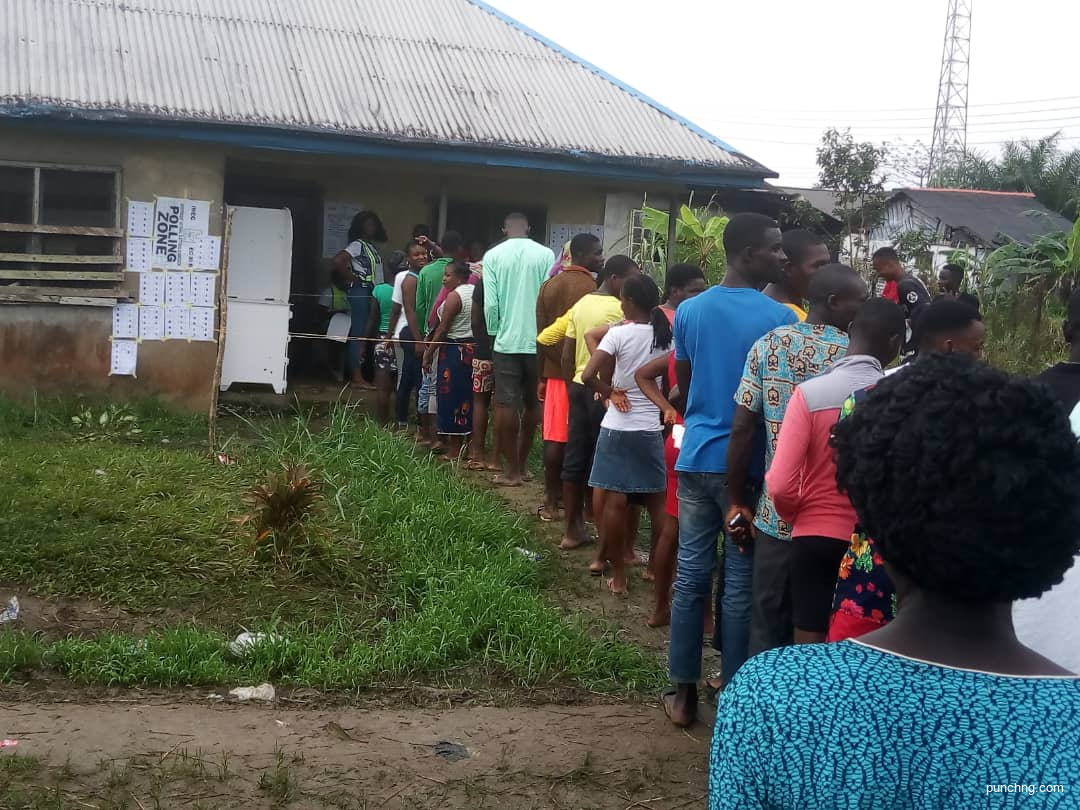 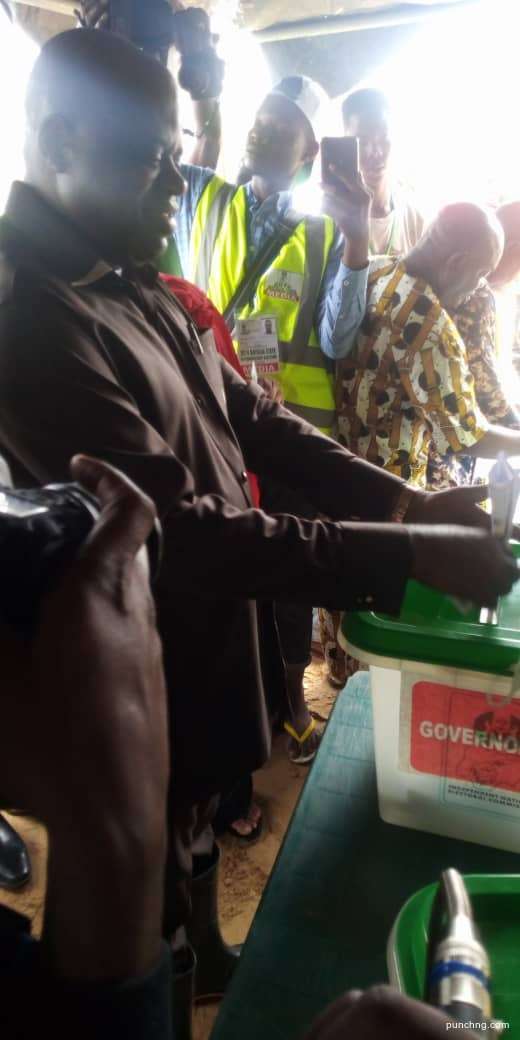 Some journalists who are covering the governorship election in Ayetoro area of Kogi State were attacked by some youths after thugs ran off with ballot boxes at Ward 01, Unit 004, where Dino Melaye had earlier voted. A Toyota Sienna SUV belonging to Splash FM, Ibadan, was damaged by the thugs 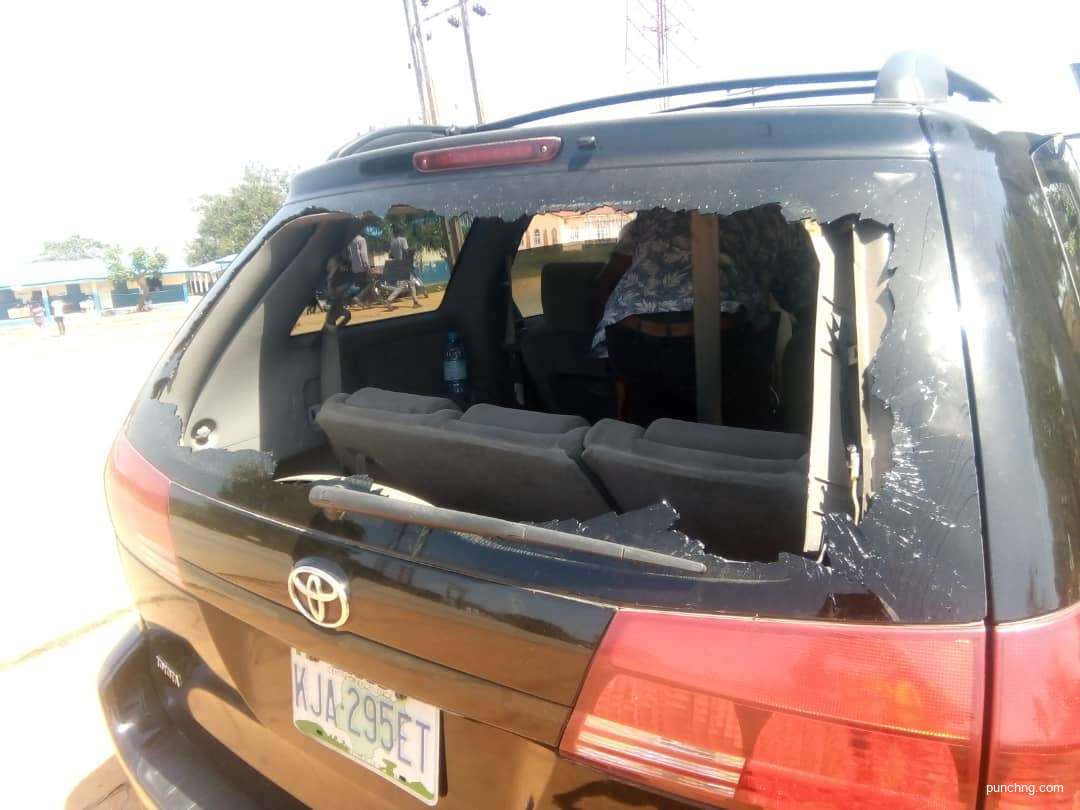 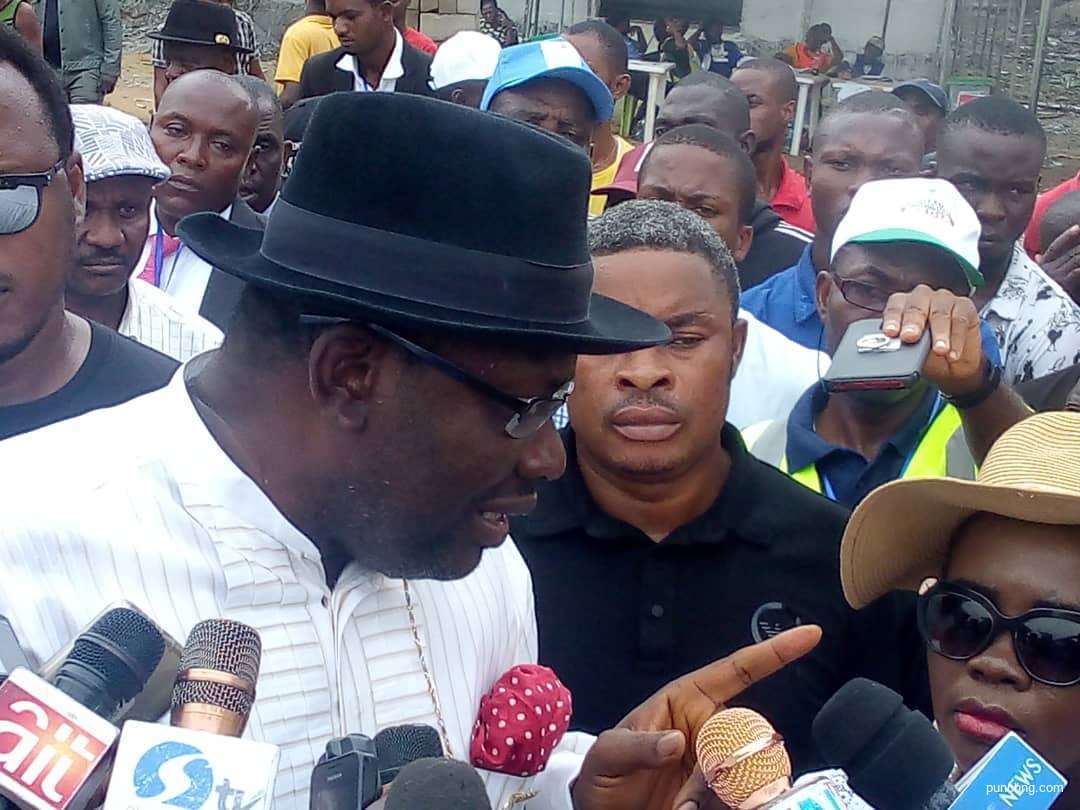 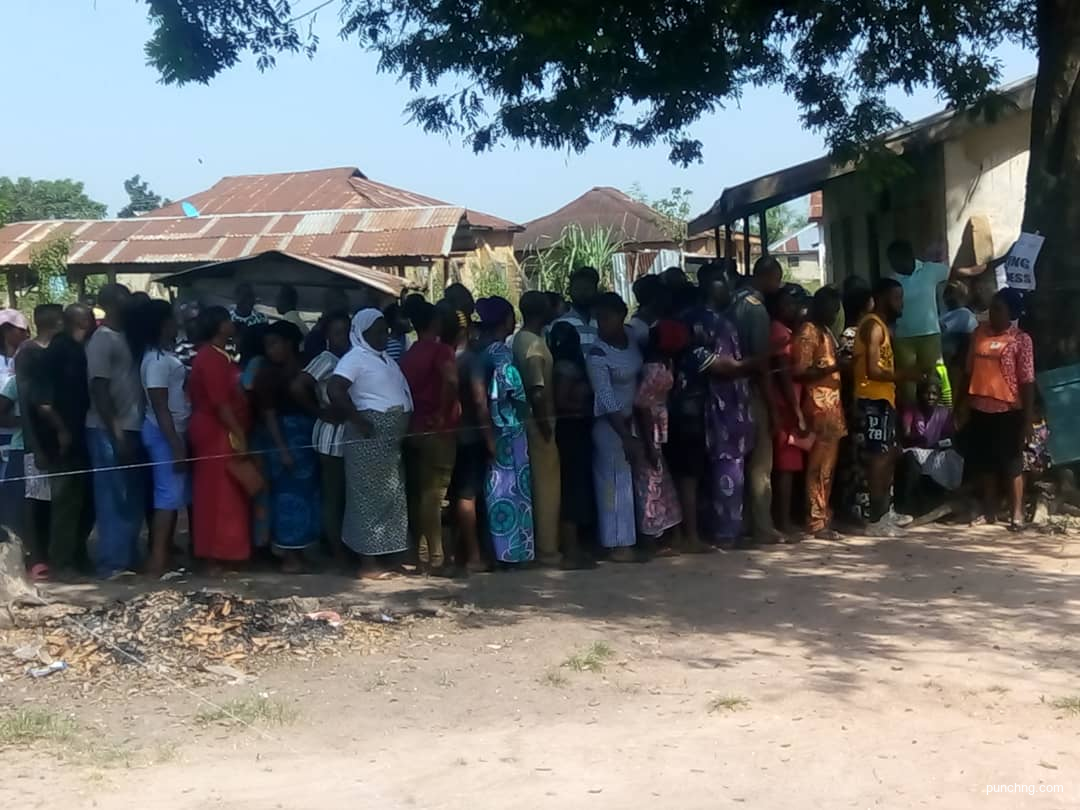 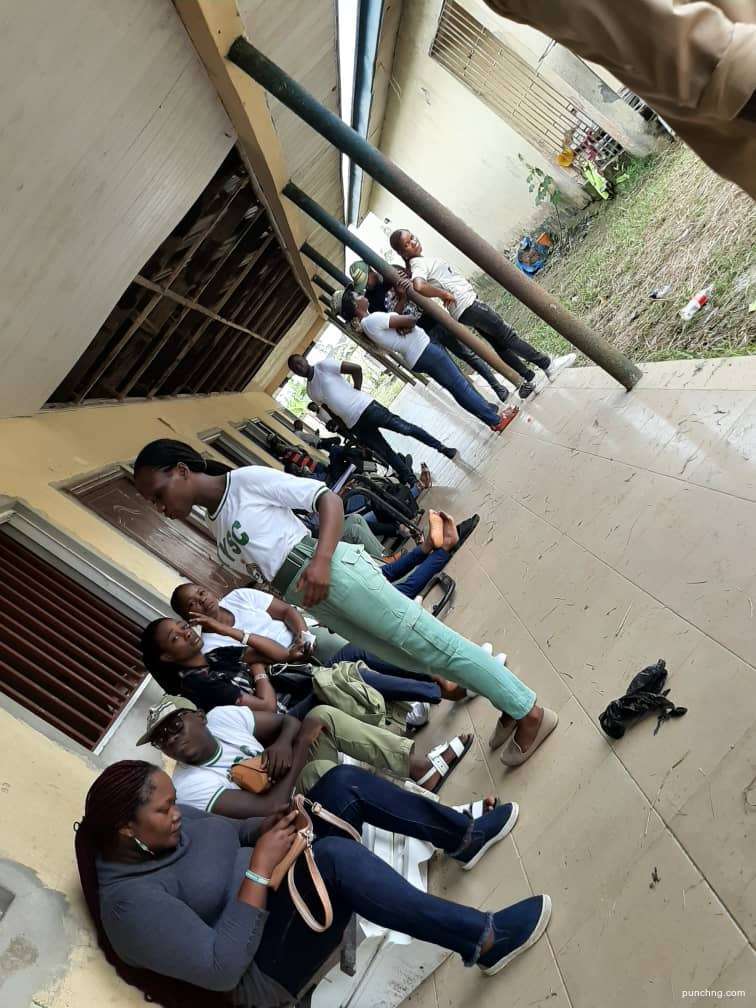 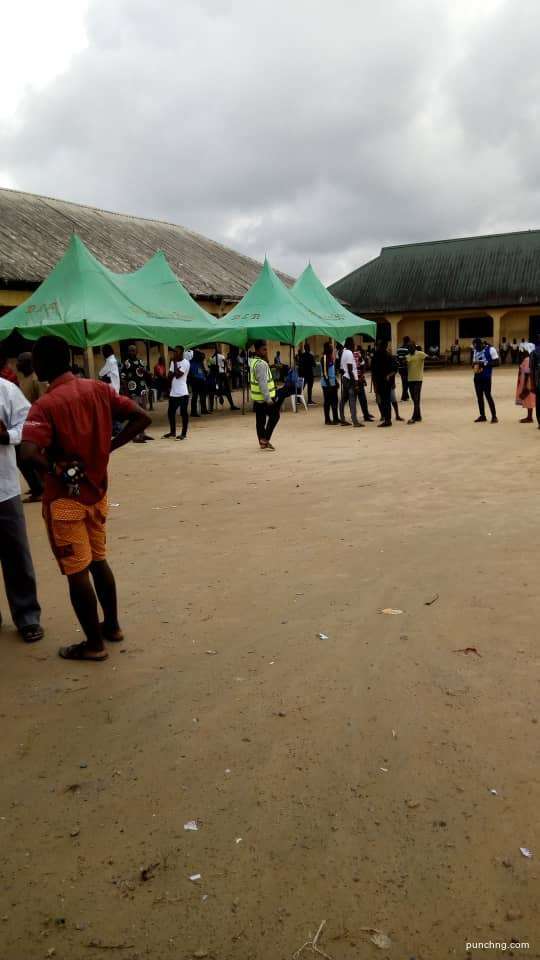 Voters awaiting the arrival of electoral materials and INEC personnel in Azikoro town in Yenagoa LGA of Bayelsa State. 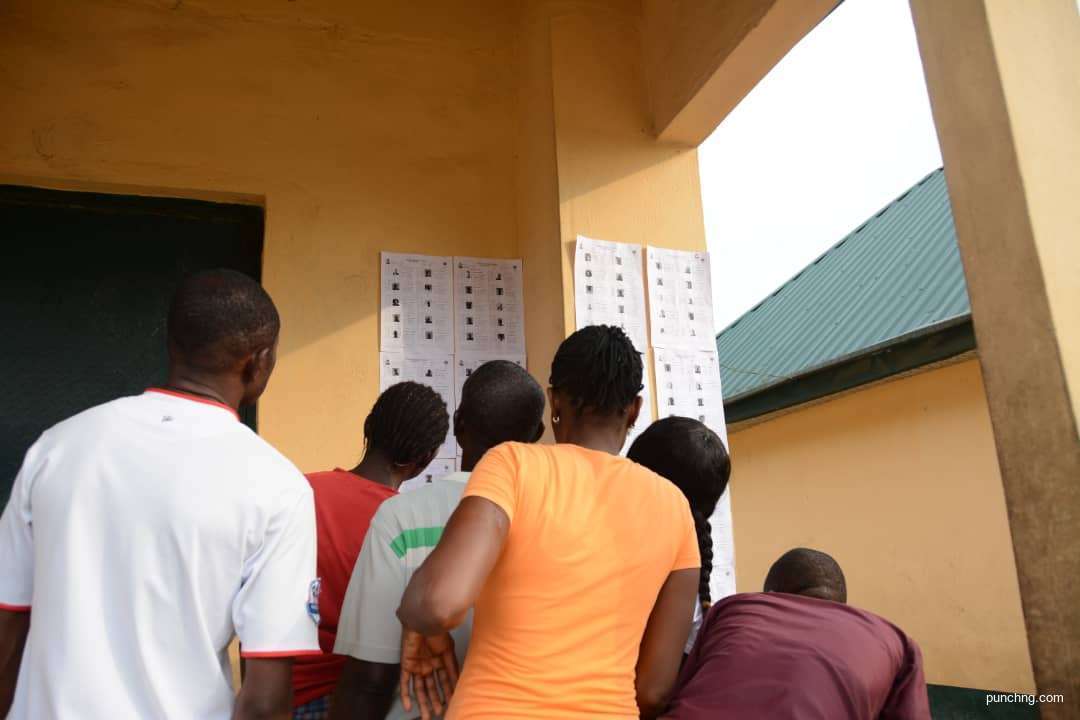 Residents of the Governorship Candidate of the Peoples Democratic Party, PDP, Douye Diri, Sampou Community are concerned that election is yet to commence over an hour thirty minutes polls opened 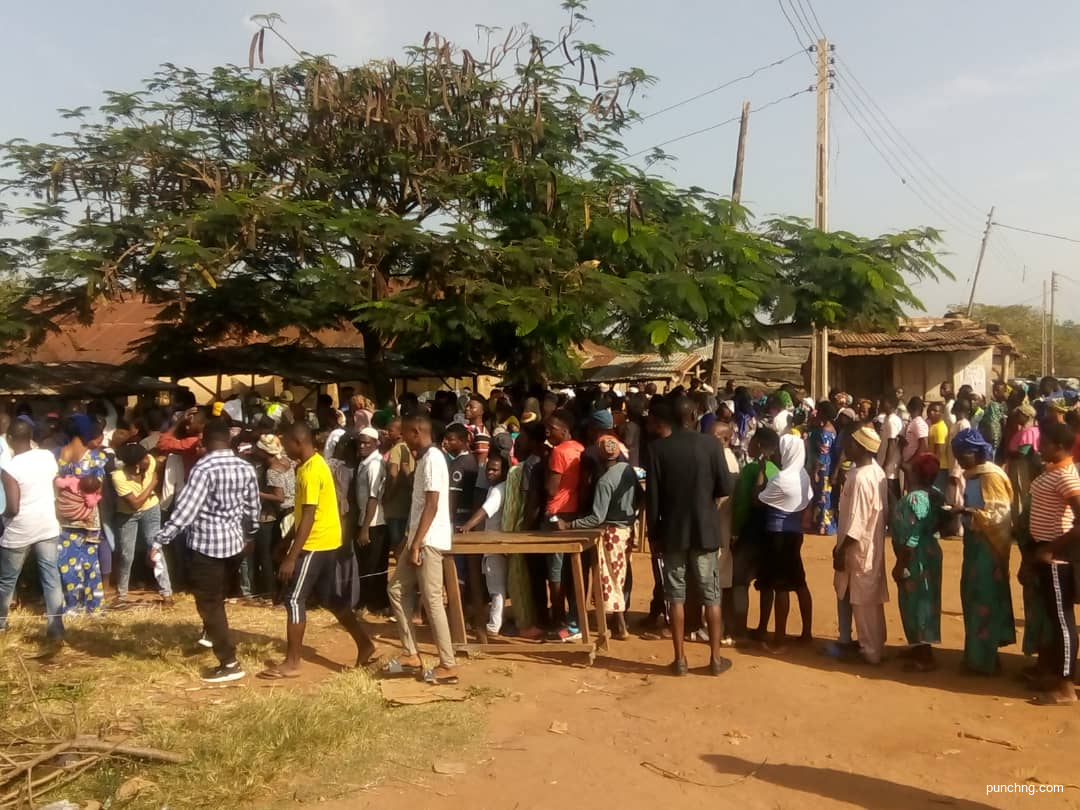 Bayelsa: Materials yet to arrive at Jonathan’s polling unit in Otuoke
At Otuoke, Ogbia LGA, former President Goodluck Jonathan’s hometown, voting materials were still being expected as at 9.24am. The materials were still at Community Secondary School, Otuoke, from where they will be distributed to various wards in the community. 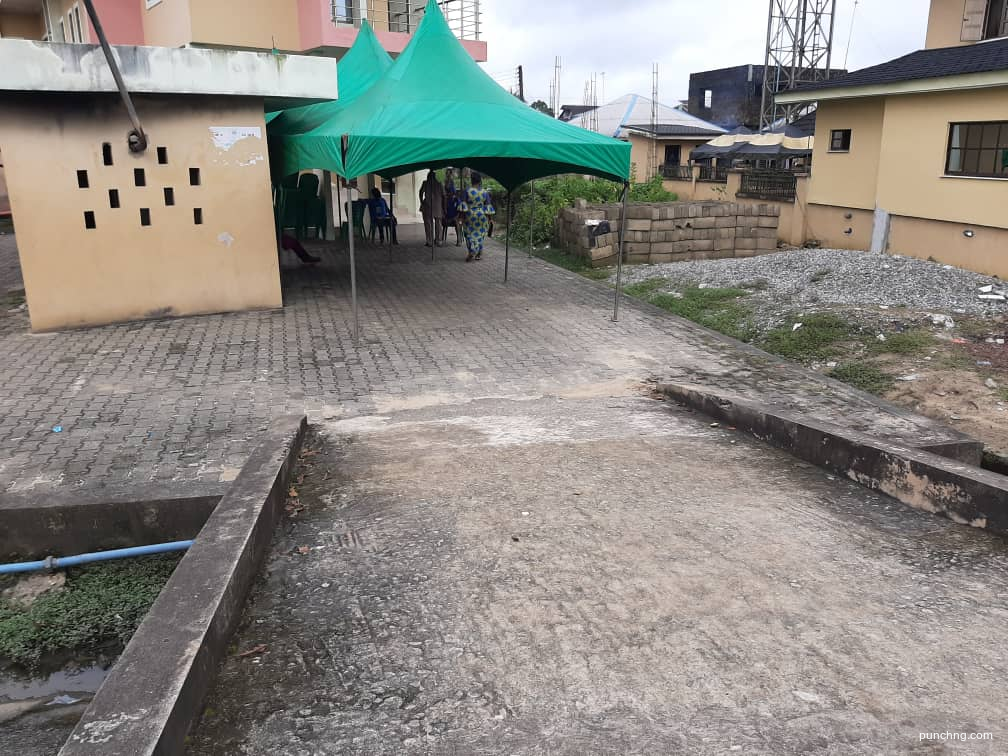 Sampou Junction leading to the community of Senator Diri, the PDP candidate in Kolokuma/Opokuma LGA of Bayelsa State on election day. 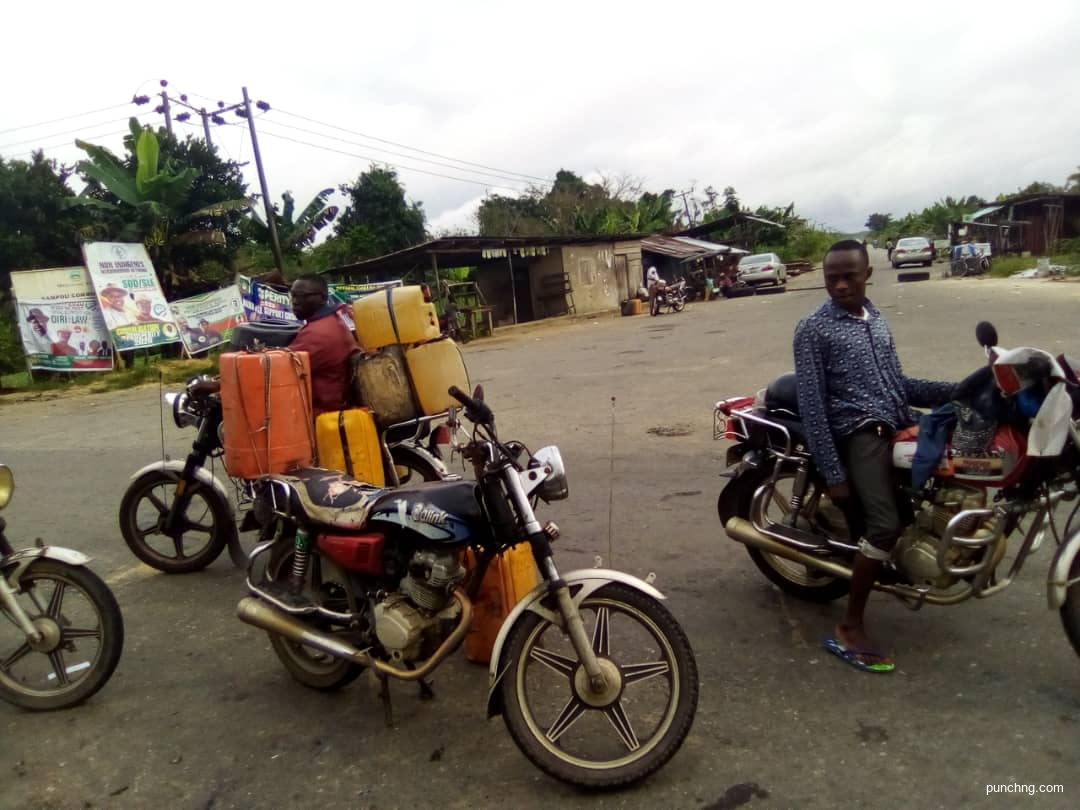 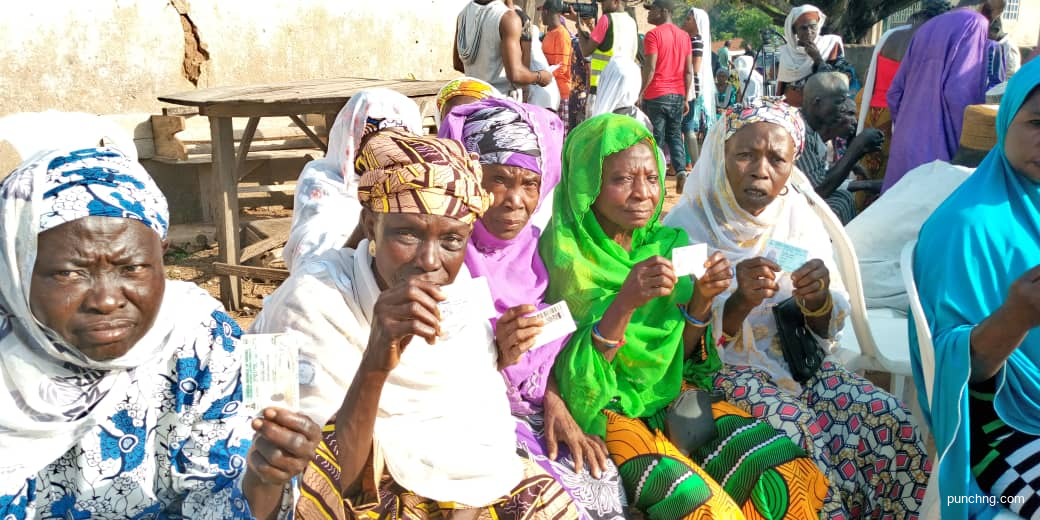 The Deputy Director, Public Communications of the Kogi State Peoples Democratic Party Campaign Council, Usman Austin, on Saturday raised the alarm that two young men who dressed in the uniform of officials of the Nigerian Security and Civil Defense Corps have been apprehended in Ayingba Dekina Local Government Area by the people.

Kogi: Voters checking the register at a polling unit 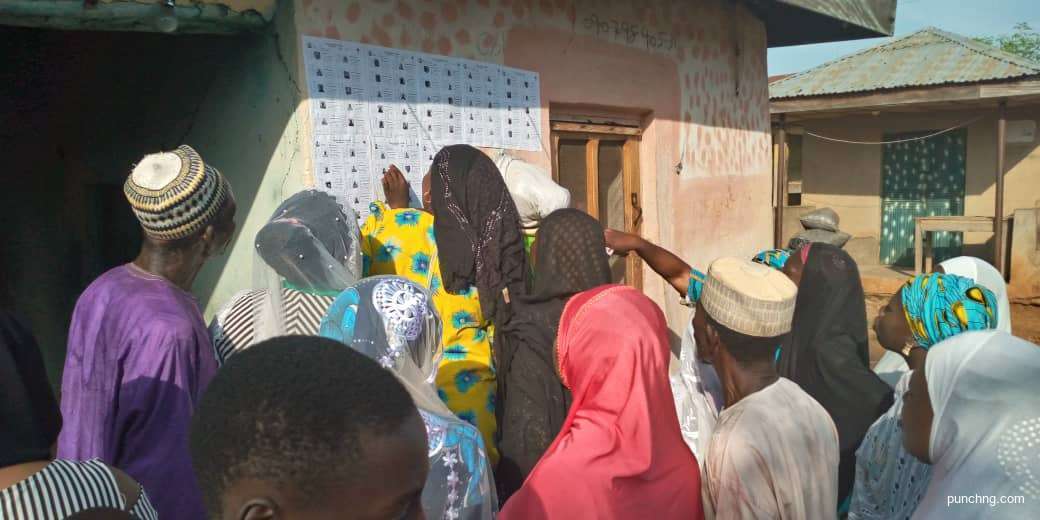 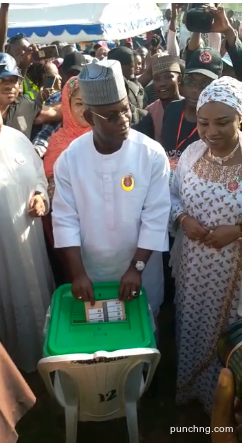 Security operatives inspecting electoral materials before voting starts at Market Square polling unit, Onebukun in Kabba/Bunu council area of Kogi Date during the governorship and senatorial elections in the state. 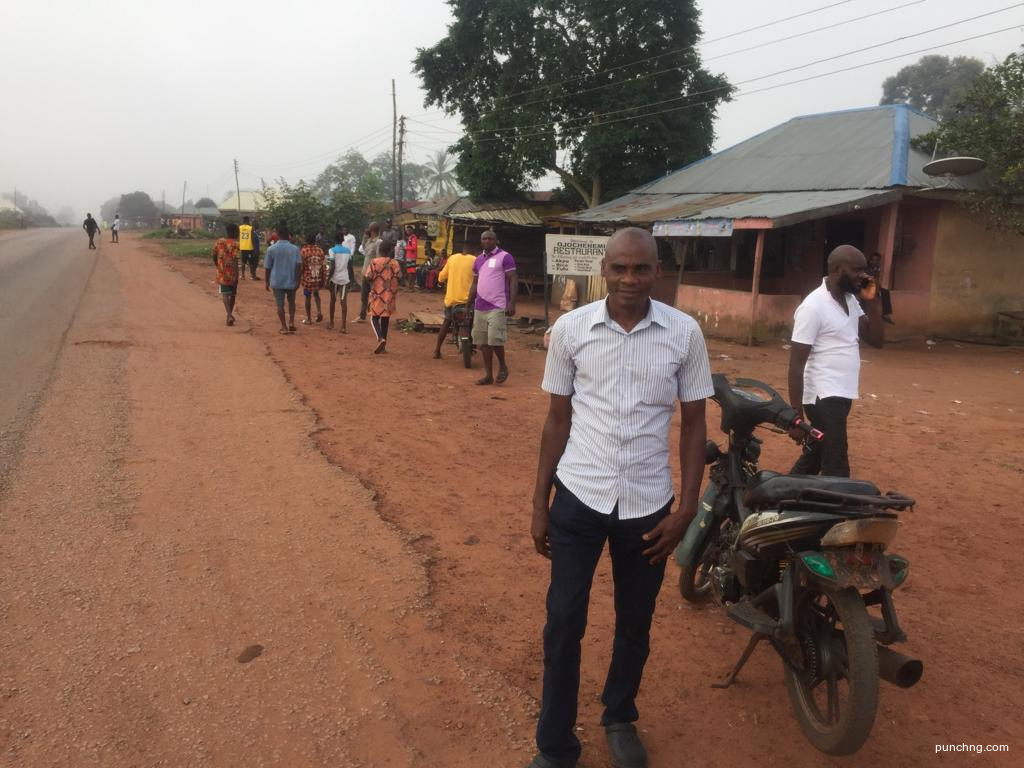 Bayelsa: Man decides to wash Keke after soldier’s harassment
This man says soldiers at a checkpoint asked him to get down from his keke and trek to his polling unit. Which is quite a distance about 10-15mins joutney with the keke. After pleading with them with no success he decided to go and wash his keke at a flooded Alamesiayega Road. 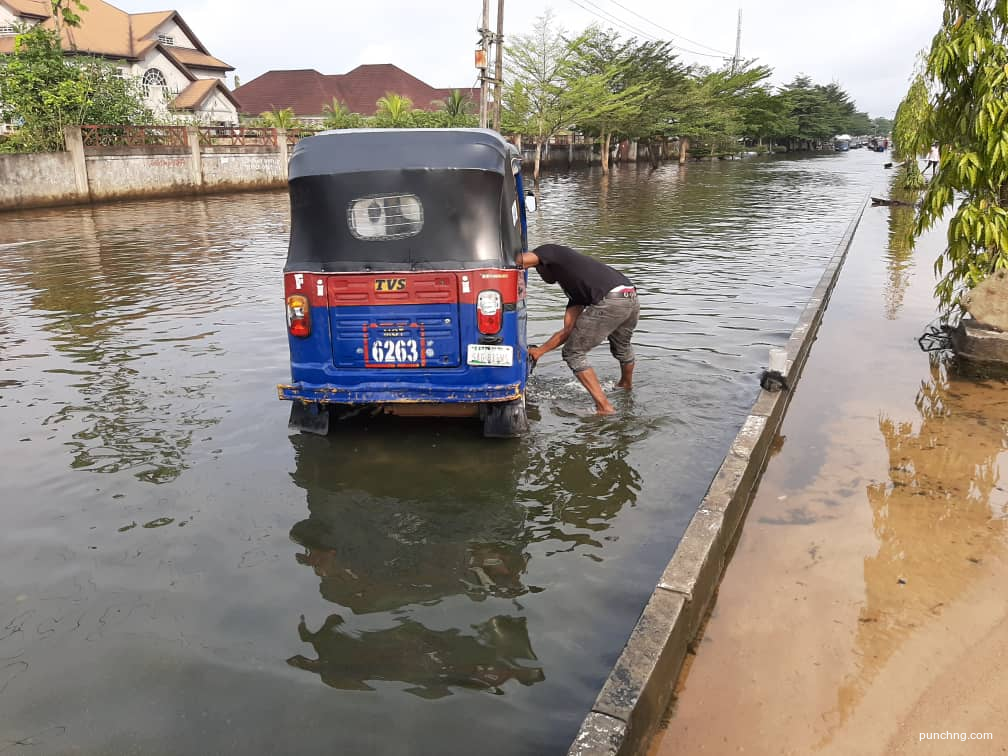 Kogi: Security operatives mount roadblock
On Obajana/Kabba road, combined security operatives mounted several road block on the road, making it difficult for inter state transport operators and other road users to move freely. Our correspondent was trapped in the traffic for several minutes before being given preferential access after identifying himself early in the morning

A woman and a man casting their votes at Unit 03, Okoro/Gbede Primary School in Ijumu council area of Kogi State during the governorship/Senatorial election in the state. Olufemi Atoyebi 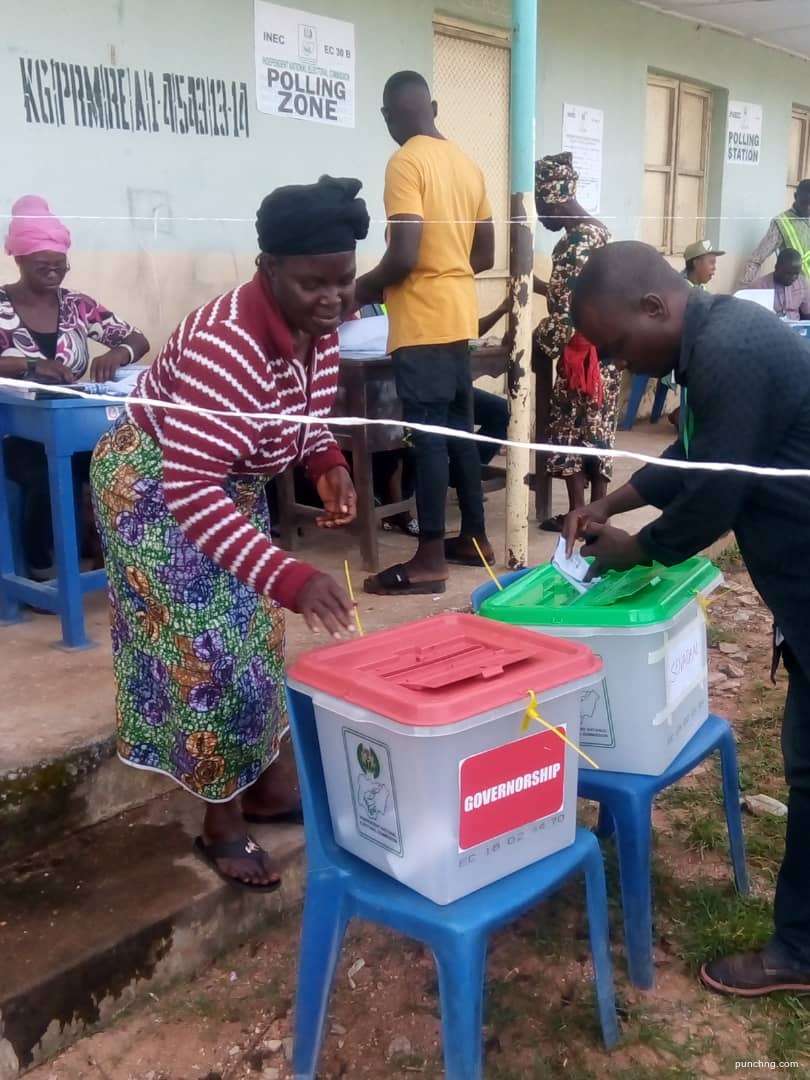 Kogi: Elderly man waits for his turn to vote

An elderly sits before his turn to vote at Unit 03, Okoro/Gbede Primary School, in Ijumu council area of Kogi State. 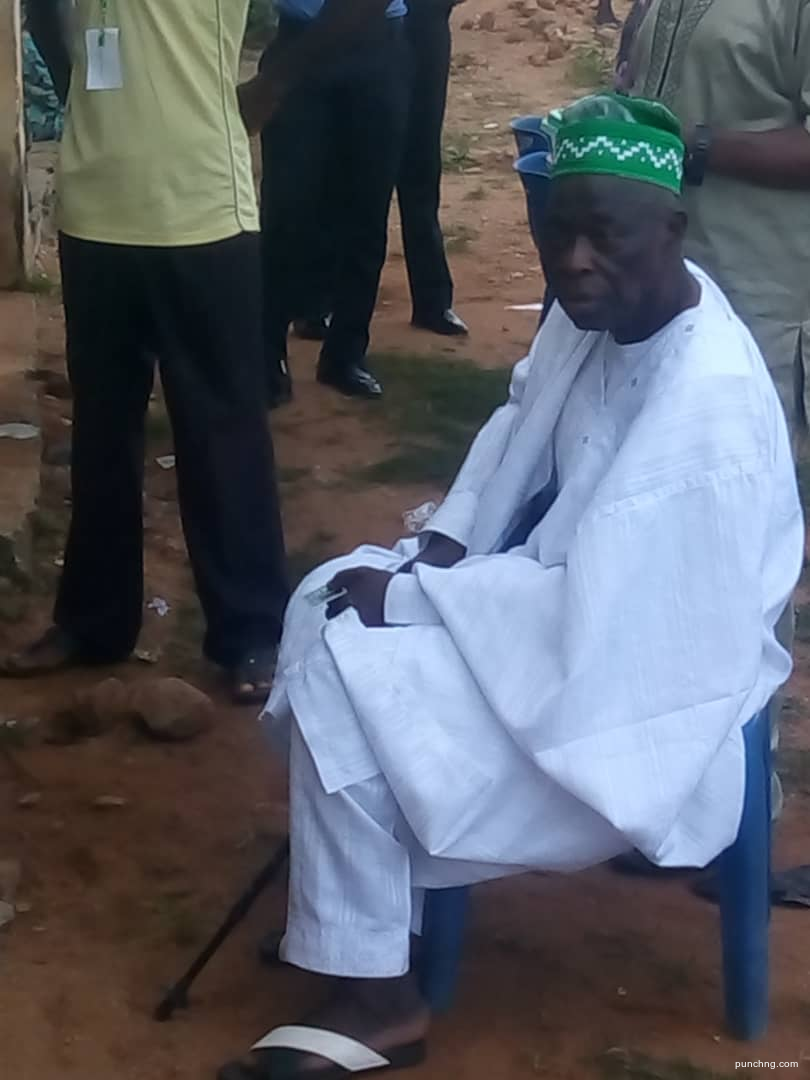 Bayelsa: Voting commences at 8.17am at Okutuokutu

Election can wait, a scavenger goes to work !

A scavenger on duty during the governorship election on Mbiama/Yenagoa Road. By Tony Edike 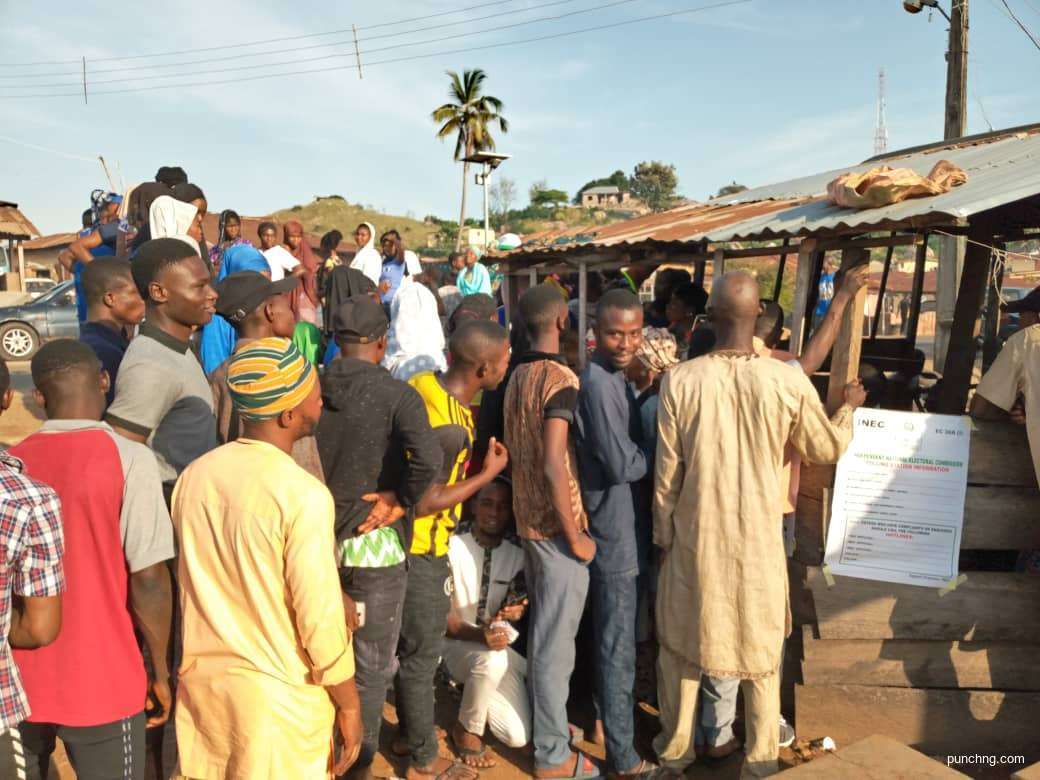 The candidates of the All Progressives Congress and the Peoples Democratic Party for the governorship polls in Bayelsa and Kogi states will engage in a fierce battle in at least eight local government areas considered to be the battleground places for today’s election.

the two leading parties may coast to victory in no fewer than 21 LGAs considered to be their strongholds in the two states.

In the eight Bayelsa State LGAs, the ruling PDP is expected to engage the main opposition APC in the Yenogoa Local Government Area considered as a major battleground, while both parties may divide the remaining seven councils in the ratio of three to four.

While the APC is predicted to gain the upper hand in Brass, Nembe, Southern Ijaw and Ekeremor LGAs, the PDP is expected to coast to victory in its strongholds of Sagbama, Ogbia and Kolokuma LGAs.

In Kogi State, the ruling APC is expected to clash with the main opposition PDP in seven battleground council areas.

In the remaining 14 council areas, findings show that the APC will coast to victory in five stronghold LGAs making up the Kogi Central Senatorial District, where Governor Yahaya Bello comes from, while the PDP is expected to show strength in the nine councils making up Kogi East, where Musa Wada comes from.

However, there are indications that certain factors may affect Wada from polling block votes in these areas.

Photos from BamBam and Teddy White Wedding in Dubai