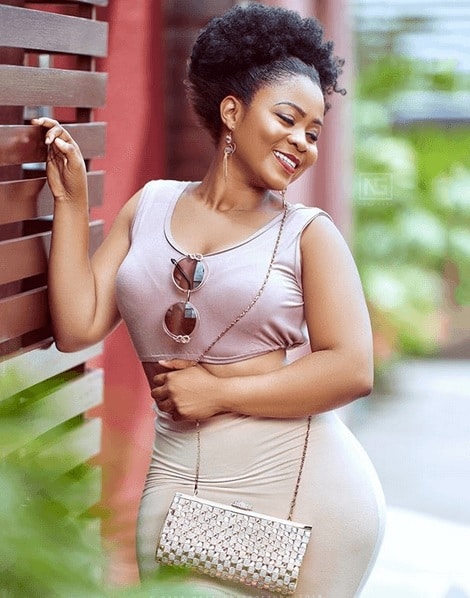 Actress Kisa Gbekle has opened up on her sex life as she has, in an interview, disclosed she broke her virginity at age 12.

Kisa, 27, speaking on Zionfelix Uncut mentioned that life was not rosy during her childhood days – a situation which compelled her to date and sleep with men for money.

While revealing she’s dated five men, the actress, who appeared moody, said her past is nothing to be proud of, because she did quite a number of things she shouldn’t have.

She will, however, not be too hard on herself because there was no better alternative.

“My exes are just five… and I broke my virginity when I was 12 years,” she said. “It was because of where I was coming from. I had to take things into my hands. I had a very bad background. My past is something I’m not too proud of. When you’re from a very poor home, you do everything to make it in life. I started doing that to take care of myself, to pay my fees. I had dropped out of school. There was no money…

“I didn’t even know my age. It was when I completed JSS before I got to know that I no even catch 20 years sef wey I do things plenty like that. I was dating these young guys from good homes in Volta Region.”

Asked if there has been an improvement in her life in terms of finances, she replied, “I’m not broke, I’m not rich. If it’s boyfriend, I have; I don’t have. I don’t even know whether I’m dating or not.”

In June, this year, rumours were rife Kisa was dating dancehall artiste, Shatta Wale. The speculations were fueled when both personalities flaunted each other’s pictures on their respective social media pages and responded to each other’s posts in a manner some thought was too suggestive.

Reacting to the rumours at the time, Kisa told Graphic Showbiz she was least perturbed about what people say. She however refused to confirm or deny her alleged amorous relationship with Shatta Wale.

She said, “What people say does not bother me at all, that is their opinion and at the right time, when the truth comes out, everyone will know and the tongues will stop wagging… I do not have an answer to that as to whether we are dating or have dated or anything like that but all I can say is that, we are friends, he is like a brother to me and that is it.”

“I have seen lots of stories going round and the name calling has also been something else but I want to tell people that until Shatta Wale is married, he is single. So he is at liberty to date whoever he wants to be with so they should let him be.

“Shatta Wale is not a child and knows what is good for him, he is also mature to make a choice when he wants to and knowing him, he would want to flaunt his woman when he gets her so people should just keep their cool and watch,” Kisa added.

Singer Lucy blasted by Tacha’s fan over her raunchy photos