The episode starts with Bebe going to the market. Harjeet stops her and greets her. She calls him a dog indirectly and asks him to go. He says your son is a dog, I m not saying about Jaga, but Charan. He asks everyone to congratulate Bebe for Shah poshi, but who will become Shah, did anyone not tell Bebe, the news is spread in village. Mannu runs to Amba and says news has spread, even Harjeet got to know.

Bebe asks Harjeet to say clearly. Harjeet smiles and says we want to say whose Shah poshi is it, Manpreet or Yuvraaj? Bebe gets shocked. Mannu says Yuvraaj is Charan’s son. Amba gets shocked.

Harjeet says Charan gave two daughters and two sons, he had a son with his friend Gauri, now tell me who is a dog, me or Charan, I thought Amba told you everything that Yuvraaj is the illegitimate child of Charan. Bebe gets shocked.

Mannu says I did not tell Bebe and stopped Yuvraaj from telling her, you tell Bebe, if Jagan speaks, don’t know what will happen. Bebe goes. Harjeet smiles. Jagan comes and holds his neck. He scolds Harjeet. Harjeet says I spoke against entire Pavaniya family, you came late. He pats Jagan and leaves. Bebe gets dizzy. Jagan holds her and sees her in shock. Harjeet comes home and laughs. Amrit, Swaroop and Raman come. Harjeet tells them that Charan was a cheap man, you said Charan is the best man, now I have seen his illegitimate child today. Swaroop asks what nonsense, I don’t believe this. Harjeet says I have seen that boy, he is staying with them in their, I took revenge for my insult. He laughs.

Amba goes to Yuvraaj. He says I have the kalgi, how would I leave this. He gives Kalgi to Amba. He says this is my dad’s house and family, which I was finding. Bebe angrily comes home. She goes to talk to Amba in room and asks did you know Yuvraaj is Charan’s illegitimate son, answer me. Amba says I just got to know. Bebe says how much will you lie, enough now, have some shame, how much will you cheat me. Amba asks cheat, did I cheat you, did you think of me, what I went through, when I got to know that my husband is not Lord. The Heir 9 August 2019.

He had an affair and had an illegitimate child, I did not tell you being worried for family respect. Bebe says I am his mum and has right to know everything, my son would have not taken wrong step if you did not force him, you did not give him heir, you are blaming him, its your mistake.

Amba says you are saying its my mistake, not Charan’s, you are asking me why did I not tell Mannu is a girl, I understood today, I did not say I was sure that I will not get support with a woman like my mum here, you are a woman, and does not understand woman’s pain, you don’t think girls can be better than boys, women are always wrong for you, your son is not wrong for you, I m much hurt, I would have not lied to you if you understood me, you did not make me believe you, I had to lie, its not my mistake, its your mistake. She cries.

Amba asks Bebe to call the village council and tell everyone that Mannu is not this house’s heir, he is not a boy, but a girl, he is not Shah, tell them about Charan’s other marriage and illegitimate child, when villagers came, why did you not say Mannu is a girl and has no right to take decision.

Bebe says don’t dare to say a word against my son, none will be worse than me if you do. She raises hand. Mannu comes in between and stops her. She says now you can’t raise hand on my mummy. Amba asks Mannu whats this bad behavior. Bebe says what else can I expect from you both and goes. Amba scolds Mannu.

Jagan meets Bebe and asks her what will she do now. Bebe scolds him and does not take his support angrily. Mannu cooks food for Bebe to end her annoyance. His hand burns. Simran looks on and says you think she will agree by this. Mannu says don’t know, I should keep trying. Amba asks Gunjan to keep the bags in room upstairs, Yuvraaj will stay there. Gunjan asks why. Amba scolds her. Mannu says Yuvraaj is scared to sleep alone. Amba does not listen. Mannu says truth will be truth, we have cheated Bebe, we lied that I m a boy, and Yuvraaj is the heir of this house. Amba looks at Mannu.

Mannu says we cheated Bebe. Amba says we did not cheat Bebe, it was her mistake, if she did not scare me that she will kill my daughter, I would have not lied and died each day, we died to lie to Bebe, I m not a liar, Yuvraaj is Charan’s cheat, you are the heir, no one else, seven years I have worked hard by killing us, I will not let that go waste, no one can come and become heir, I will not let this happen, you understand and accept this. She cries.

Bebe recalls Harjeet’s words and drinks. She throws the glass and says my pride broke down. I was proud of you Charan, today my head bowed down because of you, I will never forgive you. She cries. Mannu says Bebe will not accept me, I m not her Shah. Simran asks you think Bebe will accept Yuvraaj.

He asks for the roti he made. Yuvraaj takes that roti for Bebe and says you maybe hungry, you did not eat anything since yesterday, so I got this, I know you all have problems by my coming, but what can I do, I have no one, I came here to find family and did not know this is my house. I did not wish to hurt you, I know Mannu did not apologize, its fine, I apologizes on his and everyone’s behalf.

Bebe slaps him and asks who are you. She asks why will you apologize, you will illegitimate, get out, how dare Harjeet insults me in front of the pind, its because of Charan. Mannu and Simran look on.
Yuvraaj sees Mannu and Simran looking on and praises Charan. He says you are Charan’s mum, how can he hurt you, my mum said he was a very nice man, have food. She scolds him and asks him to go, you will become my pain reliever. She slaps him. He gets angry. Bebe drinks wine. Mannu cries seeing her.

Jagan says whats use that you are staying here. Raavi says I got news, Bebe is drinking a lot and not seeing Amba’s face. Swaroop comes and jokes on them. Jagan gets angry. He holds her neck. She says you will not become Shah, your family respect is ruined, Charan ruined you, go and do checkup of Raavi, maybe she has someone else’s baby, your family is so cheap and characterless.

Raavi says kill her. Sushila says Jagan will go jail, leave her. Swaroop laughs and asks what happened, did you get scared. Sushila scolds Swaroop and asks her to go. The Heir 9 August 2019 Update

Sushila asks Jagan why is he creating issue. He says I would have killed Swaroop. She asks him to think how to become Shah, and enter the house. Bebe has broke down, use her weakness and enter the house again. Raavi agrees. He gets thinking and says it means to hit on the hot iron.

Simran asks Yuvraaj by what right did you take food for Bebe. He asks can I call you Didi, I was worried for Bebe and took food. Mannu stops Simran. Yuvraaj tries to help Amba. She gets angry and acts rude. Amba gets clothes and asks Simran to take care of house and also Mannu. Yuvraaj says I will leave from here tomorrow. They hear sound and rush to see Bebe.

They don’t see Bebe and see the blood marks on floor. Bebe is drunk and walks on the road. She recalls Harjeet’s words. They all try to find Bebe. Raj sees her drunk and thinks if anything happens to her in this state. He sees Yuvraaj going towards Bebe. He thinks Yuvraaj would have come to take her. Yuvraaj does not stop Bebe and smiles. Raj gets shocked.

Raj asks Raman to come and see Mannu’s Bebe. Raman gets shocked. Simran and Mannu come that way. Bebe faints. Mannu sees Bebe fallen on the road and a speeding truck coming towards her. Mannu runs to her and tries to wake her up. He stands in front of the truck to stop. The Heir 9 August 2019 Update On Zee World 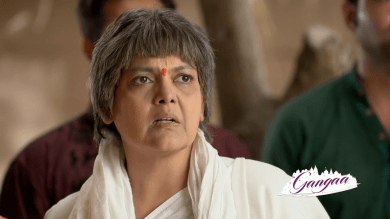