Family Affairs 30 May 2019 Update On StarLife

Today’s episode starts with Riya asking him and he gets angry on him. He says I m sorry, we don’t know each other, if we know then we will work well, shall we got for coffee after demo. She gets glad and he says he will answer her questions. She says we will finish this work and go.

Many ladies bring their utensils and asks her to wash. Kaushalya sings bhajan and then talks to the ladies. They ask about Sarla and Kaushalya tells them. Sarla goes to the stall and asks for washing the utensils. She identifies Riya and thinks if Shanti sees her, they will lose name. Shivam sees Sarla and goes away. Riya shows them demo. Shanti sees Kaushalya lighting diya.

Family Affairs 30 May 2019 Update On StarLife
Sarla waits for Amit. Shanti calls her and says she refused many proposals, she wants a respectable and rich girl for Amit. Amit comes home and Sarla tells him that Shanti will make him marry a rich girl, as Riya is not good, she is washing utensils of the locality. He smiles and says its good, she will do work at home, you can sit and relax, her dad came to emporium and is satisfied, I will marry just her.

Shivam comes home and messages Nimmi to give his gym bag. Shanti catches Nimmi and takes the bag. She checks it and says there is nothing. She asks her to go. Nimmi tells Shivam that Dadi stopped her, she will do any drama now. Shanti calls her. Shivam hides his office bag in the gym bag. Raghav comes home and holds Shivam. Shivam gets tensed. 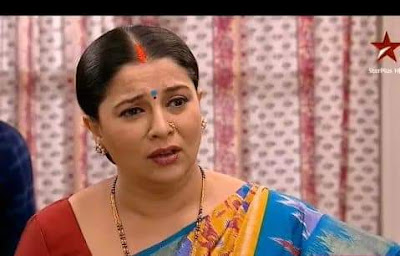 Riya asks Bunty to help her and she promises she will focus on Shivam tomorrow. Bunty asks her to call Shivam now. Raghav asks Shivam where was he going, and asks him to do any good work. He asks him to become responsible. Riya calls him and Shivam says not imp call. Raghav asks him to take call. Riya says he did not take call, I have to say sorry tomorrow and then go to next step.

Riya asks her to find some solution. Its morning, Shivam gets ready and hides his office bag. Kaushalya comes and asks him not to feel bad of Shanti’s words. She asks him to play well, she blesses him. He takes the bag and leaves. Riya rehearses and says she is thinking to give sign to Shivam and tell him that I like him, if he signs her, then good else how will I know. Bunty says yes, think something.

Riya and Bunty find on the net about the body language of men in love. Sahil comes and hears them. He says he will help, he is a guy too. Riya says she does not need his help and says she will cut his pocket money. He says fine, I will tell Anupam. She stops him and asks him to keep his mouth shut, bribing him with 100rs.

Riya says if a man is in love, he will talk by meeting your eyes, he will get everything you want. Bunty acts and laughs. Riya says she does all her work alone, will he be able to do anything for me. Shanti asks Shivam where is he going now and tells Raghav to see how Shivam is still going to play. His office ID falls near her feet and he gets tensed.

Related Topics:Family Affairs
Up Next