The first pictures have emerged from the hospital where the Thailand boys are being treated, after their dramatic rescue from a flooded cave system.

In the photos, several boys can be seen in face masks and hospital gowns, at least one giving a victory sign for the camera.

The pictures were published as new details emerged of the enormously complex effort to bring them out alive. The Thai Navy Seals also released new video showing how the rescue worked. 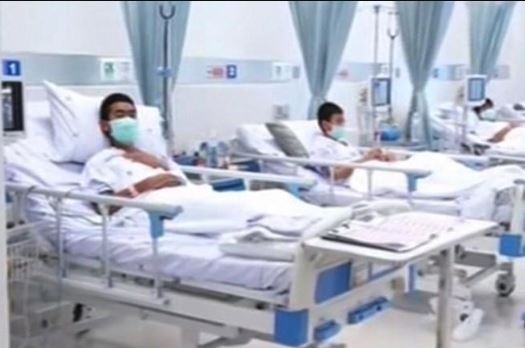 Sources in the rescue operation, including divers who took part, said the boys were heavily sedated ahead of the rescue to prevent them panicking in the dark, narrow, underwater passageways.

You May Like This:  Black woman crowned Miss Universe Great Britain 2018 for the first time

They were then strapped to one of two rescue divers tasked with shepherding each boy through the underwater parts of the system and bundled into stretchers to be carried through the dry parts.

Related Topics:Thailand Boys
Up Next