Two friends Samuel Oriko and Joseph Bassey who allegedly lured a teenage girl to the back of a church during fellowship and gang-raped her, were hauled up before an Ikeja Chief Magistrates’ Court.

The accused Oriko, 25, and Bassey, 30 both unemployed, reside in Ogba in Ikeja area of Lagos. 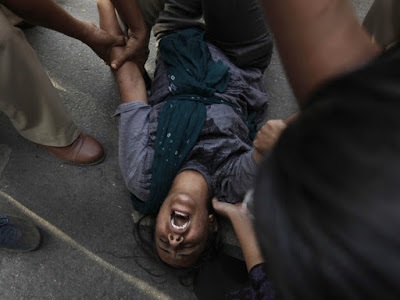 The duo is being tried for conspiracy and gang rape. The accused, according to the Prosecutor, Sgt. Raphael Donny, committed the offences on May 23 at the back of Cherubim and Seraphim Church, Ogba.

Donny said the accused lured the girl to the back of the church while prayer was going on and raped her. He said the two accused and the 13-year-old girl are members of the congregation.

“The accused covered the girl’s mouth so that she will not shout and took turns to rape her.

“The girl wept profusely and reported the incident to her mother, who was praying inside the church and the accused were immediately apprehended, ” Donny told the court.

The offences contravened Sections 259 and 411 of the Criminal Law of Lagos State, 2015 (Revised).

The accused pleaded not guilty to the charges.

The Chief Magistrate, Mrs Folakemi Davies-Abegunde, granted the accused bail in the sum of N1 million each with two sureties each in like sum.

She directed that the case file should be duplicated and a copy sent to the State Director of Public Prosecutions for advice.

Davies-Abegunde adjourned the case until June 26.

Seeds of Destiny 22nd February 2020 – The Virtues of Fearlessness

Faith To Faith 22 February 2020 Devotional – Be Willing to Wait