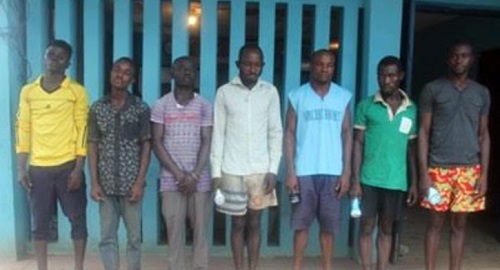 The operatives of the anti-kidnapping unit of the Imo State police command on Tuesday stormed the dreaded Avu forest in the Owerri West Local Government Area of the state and rescued three kidnap victims unhurt.

The Policemen equally arrested the victims’ suspected abductors, numbering seven who had held them for days without food and water in the bush.

Briefing newsmen at the scene of the crime, the State Police Public Relations officer, Andrew Enwerem, who paraded the suspected kidnappers said that the victims were abducted on Saturday in the state.

He gave the names of the suspects as Chukwuebuka Augustine, 22, from Egbeada Owerri, Romanus Ukabi, 28, from Isiagwu in Ebonyi state, Ikechukwu Nwachukwu, 34, of Ezinihitte Mbaise LGA and Chikamso Onyewuchi, 25, of Ejemekuru in the Oguta LGA of the state.

Others were Collins Nwaekwe, 24, of Obizi, Aboh Mbaise LGA, Chibuike Maduba, 26, of Umukoronekwenye and Ikechukwu Okere, 20, of Umukoronopelu in the Ngor Okpala LGA of the state.

According to the police spokesperson, the kidnap victims, Francis Ugorji of Awaka, Chika Ahanonu of Works layout, Mbieri road, both in Owerri North LGA and Chibuike Nwaozo of Awo – Omamma in the Oru East East LGA of the state were tied and blindfolded after being abducted in the forest for days.

Other exhibits recovered, according to the PPRO were two wraps of weep suspected to be Indian hemp, two machetes, pieces of clothes used in blindfolding the victims, four mobile phones, one blue pair of jeans and three empty bottles of alcoholic drink.

Related Topics:CrimeLatest News
Up Next