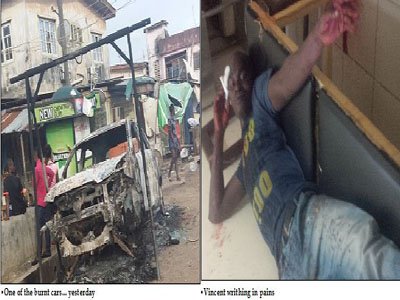 Pandemonium ensued on Tuesday at the Iyana Ipaja end of the Lagos-Abeokuta Expressway as some hoodlums engaged themselves in a free-for-all during which two residents were reportedly killed.

Vehicles parked by the roadside were said to have been damaged, while some shops were looted by the rampaging hoodlums, who also dispossessed passersby of their personal effects.

PUNCH Metro learnt that an operative of the Rapid Response Squad sustained injuries.

It took the intervention of a combined team of the RRS and policemen from the surrounding divisions to bring the situation under control around 2am on Wednesday.

There are, however, two versions of what actually caused the fight.

Our correspondents learnt that a woman, dating two men from the Abule Oki and Alagba communities, caused a rivalry between her lovers, which eventually led to a fight between their followers.

Another version, however, said the fight was between two rival factions of tricycle riders union in Iyana Ipaja, some of which hired mercenaries from the Oshodi and Agege areas.

The Baale of Alagba, Olamileko Olatunji, told one of our correspondents on Wednesday that the fracas started on Monday when the two lovers from Alagba and Abule Oki engaged each other in a fight over the unnamed woman.

He said, “There is a woman who is dating two men in Alagba and Abule Oki. The two men fought on Monday. The case was, however, settled on Monday. The traditional ruler of Abule Oki and I resolved the matter.

“However, on Tuesday, another crisis erupted as hoodlums from Oshodi, Agege, and other places stormed Iyana Ipaja. Policemen from the Alabo division came to resolve the matter.”

The traditional ruler of Abule Oki, Adedayo Oki, denied that there was any rift between the two communities.

He said he did not know what caused the Tuesday fight, adding that the police had resolved the crisis.

A businessman, Agbasali Tochukwu, said his shop was vandalised, adding that he escaped being injured by a whisker.

“A lot of damages were done. They killed two people and injured a lot of others,” he added.

A trader, Faith Obaseki, said her office fan and other items were stolen from her shop.

A dealer in electronic products, Victor Ego, said three televisions were damaged in his shop.

However, a source said the fight was caused by tricycle riders who wanted to break away from the National Union of Road Transport Workers over ticketing.

He said, “The fight has been ongoing for a long time. It is between tricycle riders affiliated to the NURTW and those that wanted to break away.”

A police source noted that 20 suspects had been arrested.

He said, “Operatives of the RRS early on Wednesday arrested 20 youths over the fracas. The hoodlums smashed the head of an RRS officer and the rear windshield of his patrol car in Abule Oki.

“The suspects were arrested after almost two days of restiveness among rival gangs over dominance in the area.”

The state Commissioner of Police, Fatai Owoseni, said preliminary investigation showed the fight was caused by a woman, adding that only one person died.

“Investigation revealed that fighting ensued over a girl, who resides in Abule-Oki. The girl went to a party at Elere, Agege, where she was molested.

“On getting back to her area, she told the youths, who  blocked the road and led a fight towards Elere, but the police stopped them. Investigation is on and those involved will be brought to book,” the CP said.