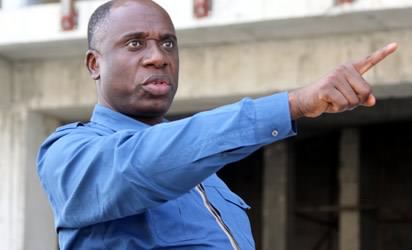 Reacting to the allegation of Wike that the money discovered in a flat in Ikoyi, Lagos, belongs to Rivers state government, Amaechi described Wike as a “confused child”.

Operatives of the Economic and Financial Crimes Commission (EFCC) who raided the place on Thursday
discovered $43.4m, £27,800 and N23.2m.

All those who were linked to the monies denied the allegation, but Wike told journalists late Friday that the money belongs to his state.

The governor also gave the federal government an ultimatum of seven days to return the money or face legal action.

But in a statement released by his media office on Saturday, Amaechi said Wike had been threatening Buhari’s administration with “fire and brimstone”.

“Wike’s reckless, irresponsible and fictitious tirade against the President Buhari administration at his media briefing of Friday is a declaration of war against the federal government,” he said.

“This has been his regular past time in recent times, making false allegations against the federal government and threatening the President Buhari administration with fire and brimstone.”

He also dismissed Wike’s claim that the money belongs to the state, describing it as another failed attempt to divert attention from the mess he has created in Rivers.

“Rivers State is perpetually in crisis, the state in a mess as Wike has made a total mess of governance in the state,” he said.

“That child who sits there as governor is confused, he doesn’t know what to do. Wike’s only solution is to attack Amaechi.

“Since he became governor, Wike sleeps and wakes up everyday, with a sole, one-point agenda to attack and denigrate Rotimi Amaechi, no matter how ridiculous and silly he sounds. Everyday in Rivers state, there is one frivolous, false story of what Amaechi did or didn’t do.

“Same pattern, the same blatant lies with no proof, same old concocted stories of corruption allegations against Amaechi told with different flavours. At this rate, if Wike is unable to perform his spousal duties, he will blame it on Amaechi. Yes, that’s how despicably low he can go in his consuming fixation to throw mud at Amaechi.”

Amaechi alleged that the governor decided to arrange a press conference when he failed in his bid to nail him throuh social media.

“This latest outburst by Wike is typical of him. We are aware that Wike first tried to float the fake news of Amaechi’s ownership of the recovered $43million and the Ikoyi house in the social media using his minions and lackeys, spending huge sums of Rivers money on the failed project,” he said.

“His minions and lackeys were calling journalists, bloggers and media organisations to run the fake story with promises of almost irresistible mouth-watering compensation for using the fake story.

“When that failed and the story didn’t gain traction that was when Wike decided to hurriedly hold the press conference Friday night, to rant and spew his outright lies, yet again without providing any proof of Amaechi’s ownership of both the property and the money.

Breaking: Dino escapes DEATH says, "Only God will protect us not the police"