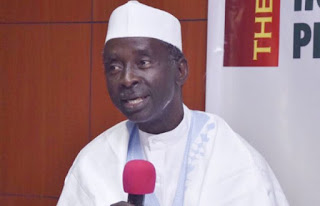 Bantex, who hails from southern Kaduna, said his people have been mounting pressure on him based on the crisis in the region.

The clash between farmers and herdsmen in the region has led to the loss of many lives, with government finding it difficult to contain the situation.

Speaking at the graduation of students of the Centre for the Study of Christian-Muslim relations  in Kaduna, which took place over the weekend, Bantex said some people in southern Kaduna believe he has not done enough to protect their interest.

“As the deputy governor of Kaduna state, I need more prayers probably more than the governor,” he said.

“This is because we are living in a state where religion and ethnicity are the prism which we want to measure the successes or failure of government, and you know that this is not right.

“As a Christian who is working with a governor who is a Muslim, I have, on many occasions, been requested to act… I have not had it easy. I need your prayers.

“Here is a gentleman who after taking the oath of office on the 29th of May, 2015, has kept a sharp focus on the content of that office.”

Bantex said the governor usually ask him to consider the fact that he will be accountable to God for every action he takes.

He described el-Rufai as a man who has the interest of all.

“Each time we sit in the executive council, he (el-Rufai) keeps drawing my attention to the need to take decisions, bearing in mind that we will one day stand before God to defend our actions,” he said.

“Here is a man who has a wholesome sense of justice and fairness. In accordance with our oath of office, this gentleman, in the demand for fairness as enshrined in that oath of office has been placing programmes, projects across the state without preference to any section.

“Look at the huge investment which we recently showcased in the event (Kadinvest) we had about three days ago.

“Anybody who watched that programme will see that the investors that came in made up their minds on the area they wished to invest in, and the governor supported them by giving them the land they require.

“Most of these investments coincidentally are in the southern part of the state. He did not convince the investors to take their investments elsewhere.”

Bantex said the actions of el-Rufai shows that he loves southern Kaduna people.

He also challenged religious leaders to design a code of conduct that will guide politicians.

“My religious leaders, when you work for that kind of a person in an environment that you are called upon to take decisions based on religious and ethnic colouration, you know what it means to you. It is a very tough time for me, I am not finding it very easy,” he said.

“What I have always told my religious leaders is to design a code of conduct that will guide those of us who are  in politics… just say ‘this is what is expected of a Christian’, and let us be so guided.

“I believe that if a code of conduct is designed today, it will not be different from the provisions of chapter two of Nigerian constitution, which we have been called upon to protect… I want to call on you to accommodate me in your prayers.”