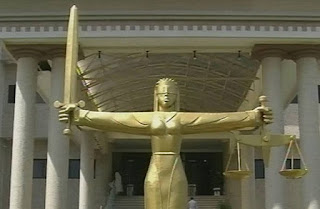 Customary Court in Aba -na-Ohazu on Thursday dissolved the 7-year-old marriage between Chinyere Orji and her husband, Charles Amuzie Orji, over deceit and abandonment.

The judge, Mr Diamond Olewengwa, who dissolved the marriage, said that all the court processes were served the respondent through his parents, yet there was no legal representation.

He said that the defendant’s attitude showed that he was aware of the planned dissolution. Olewengwa said that Chinyere having returned the bride price, it was obvious that the marriage was already severed.

“Having contracted the marriage by deceit, abandoning it for over seven years now, and refusing to restore conjugal rights to the petitioner, shows lack of love.

“Love is a basic ingredient of a functional valid marriage, lack of it is an indication that the marriage had broken down irretrievably,” he said. Olewengwa, therefore, pronounced the 7-year-old marriage dissolved and granted Chinyere continued custody of the child.

He also upheld the return of the bride price to the respondent and freed both parties from existing encumbrances, adding that hence they were free to marry any other persons of their choice. Chinyere, the petitioner, had told the court that her husband married her in 2009, and two months later returned to Brazil where he resides.

She said that after some years, she made enquiries and discovered that Charles had a wife and children in Brazil before and still lives with them after he came to marry her.

“On Sept. 18, 2011 we had our only child, Charles Amuzie Orji. Eleven months later, my husband returned from Brazil to attend to the burial of his younger brother. “He thereafter went back to Brazil and kept promising that he would come to take me and my son to Brazil, but to no avail.

“In 2014 when the child was 3-years- old, he came home and my enquiries still showed that he was married in Brazil. “He had abandoned me and my son for seven years now.

He deceived me and denied me conjugal rights, and had shown lack of love and affection for me and had built our marriage on deceit,” she said She said that having discovered that she was deceitfully married to Charles, she, with the consent of her family returned the bride price of N700 and a bottle of hot drink on Jan.13, 2017 to his parents.

Chinyere said that based on deceit which gave the marriage a wrong foundation; it had broken down irretrievably and asked to be granted continued custody of the only child of the marriage.

She urged the court to dissolve the marriage which was contracted under the customs of Amaogudu, Abiriba, Ohafia Local Government Area of Abia.