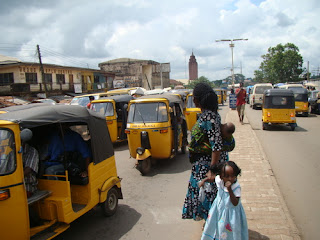 I was so shocked when my friend narrated his ordeal with KEKE in Yenagoa this past Monday. He stressed that he wouldn’t have believed it if it were Yenagoa this is happening.
Just recently as reported by chidispalace, a lady who escaped death from the Ritualists four days after been adopted in by KEKE in Yenagoa.

It is so disheartening that Yenagoa, the capital of Bayelsa state no longer enjoy maximum security.
People no longer witness armed robbery operations but tricks use by KEKE drivers in Yenagoa.

On daily basis people encounter one operation or the other ranging from pick pocket, snatching of items at gunpoint and kidnapping through some tricky ways.

Pastor Preye Bolou who joined the list of victims of Keke in Yenagoa robbery operations narrated his own story;

“Just Monday morning, I went to the bank, UBA in Kpansia area of Yenagoa to pick my stepfather’s pension money. After collecting the money, I headed out to board a KEKE home, unknown to me the Keke rider just stopped two legs away.”

He went on, “The Keke Driver was actually going my direction, Down Yenagoa, so we continued. So, getting to Okaka area the other guy entered on board making us three at the back, that’s include the man with clutches pretending to be physically challenged.

“Between Ekeki and Amarata the so called physically pleaded to the driver to pass through Imgbi road so he can get to Swali market on time, instead of passing through government house route.

After pleading with the assistance of the driver, I pitied him and agreed. I never thought it was a planned work. So when the driver got to Imgbi round about, instead of going straight to the market they diverted to the express way.
When I wanted to raise alarm the very guy with the clutches brought out a gun point it to me. He said, if I shout they will waste me, at most they will go to prison…”

The victim, maintained calmness and they took him to Bayelsa Palm axis.
He continued, “When we got there, I noticed that they are band of gangs operating at same time. There were other people they trick and brought there. I then understood that most of the KEKE in Yenagoa are robbers and Ritualists.

They march all of us to the busy and collected our monies and mobile phones, they chewed my SIM card and threw it away.

After obtaining us the gang flee the scene, left us frustrated finding our way out.”

This is a major issue that need to be checked by operatives and find a way to end the menance.
I think it is time for the government, security operatives and the Keke union to checkmate the activities of the Keke riders, know who is who.

It is time to give back to the society that generate daily earning to both the union and the government. Not just levying the drivers and at the end of the day make huge money from the poor masses. It is time to ACT.
Also share this information to others in your contact as to avoid been victimised.