Facebook Twitter LinkedIn Tumblr Pinterest Reddit VKontakte Odnoklassniki Pocket
The South-West leadership of the Peoples Democratic Party, the Chairman of the PDP in the zone, Chief Makanjuola Ogundipe, has accused Gov Ayo Fayose of being the person causing crisis in the zone. Ogundipe stated this in a statement in Abuja. Ogundipe was reacting to the meeting of some members of the party in the zone, which the Governor called for, but said some who attended were not PDP officials but cronies of the Governor and the Governor also had no right to call a meeting because he wasn’t in the position to do so. 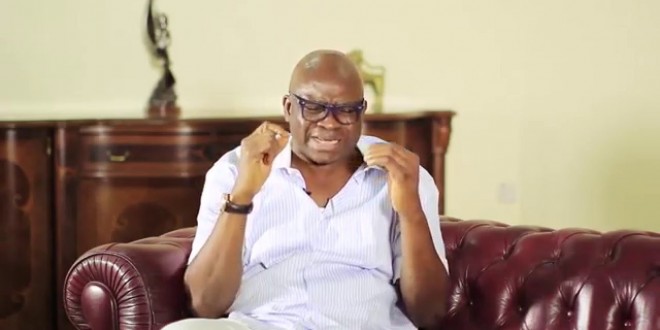 He said, “Ordinarily, any action by a character like Fayose does not deserve a response from a responsible quarter. But, for record purposes, it is important to point out that Fayose is the big shame bedevilling the PDP family, especially in the South-West.

“Fayose’s action of summoning a meeting he lacks the right to call at a time when well-meaning leaders and elders are calling for restraint and reconciliation is most despicable.

“Has he been able to call a full meeting of the PDP Governors’ Forum which he purports to lead? We thank God that most of the respectable leaders of our party in the South-West shunned the illegal gathering.” Read in full