Facebook Twitter LinkedIn Tumblr Pinterest Reddit VKontakte Odnoklassniki Pocket
Governor Ayodele Fayose of Ekiti state, has challenged President Muhammadu Buhari to reach him on telephone to prove that he is hale and hearty, as telephone calls of the President emerges.

This is the list of people who president Buhari called on phone since he left Nigeria to UK, January 19 as released by presidency. They are foreign leaders like President Donald Trump of US; King Mohammed VI of Morocco; and Alpha Conde, Guinean president and chairman of the African Union (UN). 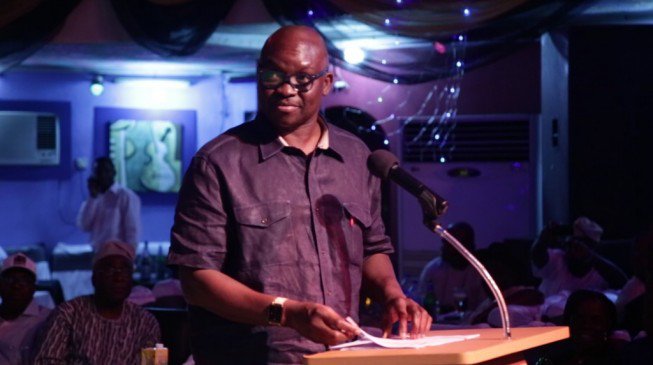 In Nigeria, Femi Adesina, presidential spokesman; Lai Mohammed, minister of information; and Abdullahi Ganduje, governor of Kano state, are among those who have spoken with Buhari on telephone.

The decision to make the conversations public is seen as a move to dispel the rumours that Buhari is critically ill.

But in a statement issued on his behalf by Idowu Adelusi, his chief press secretary, Fayose taunted the presidency, saying he could help in convincing Nigerians that Buhari is well.

“If their problem is that they are looking for a credible person who can help them convince Nigerians that all is well with our president, I’m their best bet,” he said.

“Since they are eager for the president to speak to people; believing in this way to convince Nigerians that their president is hale and hearty, let president Buhari talk to me. I can be reached on 08035024994. I am credible and Nigerians will believe me.

“A president that can speak with outsiders should be able to whisper or wave to his own people. The people gave him the very important platform of President on which he stands today and, therefore, Presidential aides should stop giving the unhelpful impression that Buhari has no respect for the Nigerian electorate.”

Alleged Pregnancy: Apostle Suleman tells his own side of the story