Facebook Twitter LinkedIn Tumblr Pinterest Reddit VKontakte Odnoklassniki Pocket
You can conveniently call Nigeria the Federal Republic of Drama. Or the Drama Republic of Nigeria. It is one day, one drama. This is probably what keeps us flying in spite of this economic headwind. Three weeks ago, President Muhammadu Buhari boarded the presidential jet and left the country for vacation in the UK during which he would undergo medical checks — in his own words. Immediately his letter to the national assembly was read, effectively empowering Vice-President Yemi Osinbajo to act as president, the rumour mill went into production at full capacity. Vacation? UK? Medicals? Acting President? Ah! Something is about to happen… 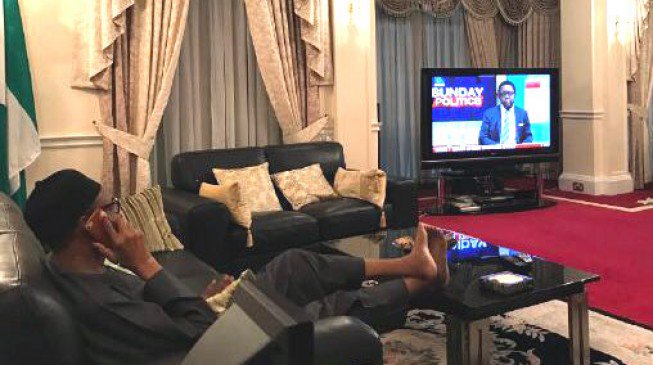 It did not take too long for the first rumour to be rolled out of the mill: Buhari is gasping for breath somewhere in a London hospital. He had a failed kidney transplant. No. He had “cancer of the ear” that had spread to the rest of his body. Forget it, he won’t survive. To the credit of the refined rumour mongers, they were patient and honest: they avoided announcing Buhari’s death very early. But the unprofessional rumour mongers wasted no time in announcing with authority: Buhari is dead! In this millennium of fake news, it was soon all over town. I was busy enjoying an English premier league match when I got a WhatsApp chat authoritatively announcing Buhari’s death.

Those who know me as a journalist were soon bombarding me with calls to find out if “it is true”. My answer was standard: “Buhari is a Muslim; if he dies he will be buried within 24 hours.” He is not Oba of Benin who would be “communing with his ancestors” one full year before he is buried. It took me only one phone call to determine the president was alive, and I never looked back. My answer was not satisfactory to many of the callers, and I very well understood why. What they wanted to hear was that Buhari was critically ill or dead, and when you were busy telling them he was neither on hospital admission nor in the morgue, you were not worthy to be believed.

I heard a lot of people say Buhari’s media managers should have come out to tell Nigerians the “truth”. But there was nothing the managers could say that would be the “truth” — except to proclaim Buhari dead. Saying the president was alive, saying he was not in the hospital, saying he was receiving visitors, releasing his pictures to the public through the social media — these can never be the “truth”. The only “truth” that some people wanted to hear was that the third-day fidau would hold in his family compound at Daura, Katsina, “tomorrow”. Or that the body would arrive Abuja airport this evening. Any other thing was not the “truth”.

A friend who was genuinely worried about the situation suggested that the president send a video message to Nigerians to say he was alive. It looked like a brilliant idea until you realised that it would take “fact checkers” just two minutes to “bust” the video as something that was recorded in 1914. All the pictures Buhari took with his wife, Aisha, and Governor Ibikunle Amosun in London were “busted”. Even if Buhari appeared on CNN to confirm he was alive, “investigations” would still “reveal” that it was a body double. It was not a battle Buhari was going to win. He was dead and only an obituary announcement would be the “truth”.

Along the line, northern governors were supposed to have met in Abuja and resolved to force Osinbajo to resign as VP and allow Senate President Bukola Saraki to step in — so that power could remain in the north since Buhari had died or was dying. Two former military leaders, Generals Ibrahim Babangida and Abdulsalami Abubakar, were reportedly at the meeting. Actually, northern governors met (in Kaduna, not Abuja) to discuss the security situation in southern Kaduna. In fact, both Babangida and Abubakar were out of the country (maybe they joined the meeting by Skype, who knows?) These rumour merchants got a lot of rebroadcasts on social media.

Could Abdulsalami really be part of a meeting where it would be resolved that a southerner must not be allowed to succeed Buhari? His antecedents do not suggest so, given the role he played in power shift to the south in 1999 and in working behind the scene to ensure Vice-President Goodluck Jonathan was allowed to step in as acting president in the absence of President Umaru Musa Yar’Adua in 2010. More so, if a few chauvinistic northern governors truly wanted a “northern” president, would a Bukola Saraki from Kwara — whose mastery of Hausa language is worse than his Japanese — be their choice? In the world of rumour mongering, everything is possible.

Meanwhile, Buhari was busy scripting his own drama. Instead of coming out straight to tell us he was not in the hospital or Aljanna, he resorted to modelling jalabiya and skull cap for the social media. In one pose, he put his “feet up” (actually, on the coffee table) watching Channels TV with a phone stuck to his right ear. In another, he was having breakfast or lunch, maybe even dinner, with Amosun. There is something about Buhari that I can’t understand — he likes to keep quiet while damaging accusations are pouring like rain. If he thinks it is a virtue, then he still doesn’t understand that he is president of Nigeria in 2017 and not 1984.

Although Buhari paints the picture of somebody who doesn’t care about the rumours, in truth he cares. If not, he would not have engaged in a flurry of phone calls, like a customer service agent, with the Osinbajo, Saraki and Speaker Yakubu Dogara. He did not tell them to keep it secret. He would not have received Asiwaju Bola Tinubu and Chief Bisi Akande and seen them off to the door. He did not tell the photographers not to shoot. So he cares. I believe all the pictures were deliberately arranged to prove to Doubting Thomases that he was alive, that he was not on any sick bed. So he does care what Nigerians say. What’s the issue then? Basic aloofness? Or ego?

To be sure, Nigerians have every right to know the state of health of their president. He is president of 180 million Nigerians (forget that infamous line about 97% vs 5%). His medical state means a lot to the political stability of Nigeria. His health has a direct impact on the economy. What the economy needs now is anything that will boost confidence — not kill the spirit. So it is not about Buhari, his family, his party, his part of the country or his ethnicity. It is about us. All of us. The actions and inactions of Buhari affect every single soul in Nigeria, so he cannot carry on with the attitude of “I don’t give a damn” (apologies to Jonathan).

It has been argued that Buhari should tell us exactly what is wrong with him. Good point. What I don’t know, however, is how we will receive this “truth”. Let us, for the purpose of this discussion, say that he has a terminal cancer, as speculated, and he discloses it. What will happen next? Let me guess: there will be a nationwide protest asking him to “honourably” resign because he is “too sick” to lead Nigeria. If, on the other hand, he says he is just diabetic, would we be satisfied? I can hear us sternly declare that he is not telling us the “whole truth”, like “can’t you see that he is very frail? Can he rule us with diabetes?” Whichever way, he is damned.

All said and done, whether we like it or not, our democratic experience has been enhanced by the events of the last three weeks. For one, there has not been a power vacuum like we witnessed in 2009 when it seemed Nigeria had no president in Yar’Adua’s absence. The constitution was amended to avoid that scenario. Even if Buhari had not written to the national assembly, Osinbajo would still have legally started acting as president after 21 days. And, really, Osinbajo has impressed me with the way he has handled the situation — even when he didn’t assume full presidential powers. He has spared us more episodes of the drama.  CONTINUE READING