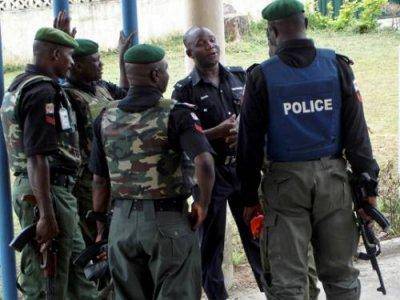 According to SaharahReporters, Police in Lagos on Friday evening arrested over 40 persons for public nuisance.

The arrested persons were picked up in a raid on a beer parlor-cum-club on Dumare Street in the Epetedo area, with some of them remaining in custody on Monday. Some residents claimed some of those arrested had been seen dancing in the nude.

According to reports the owner of the club, simply identified as Shorin, was also arrested but was later released by the police. According to some residents on the street, the club was celebrating its first anniversary, which attracted a large crowd.

The owner of Okla Rental, Mr. Olamilekan, who rented chairs to the club, said he was also arrested but was released the following day.

An elderly woman who spoke to our correspondent said the police did well to arrest the clubbers, stressing that the club has been a source of immorality on the street.

“All our young boys and girls see the nonsense they do in that place all the time,” she told SaharaReporters. “One cannot bring up children in Lagos again because of these people. They come on the street speaking profanities. Most of the boys that patronize the bar are yahoo yahoo boys”.

At about 12 noon on Monday, when our correspondent visited the area, a few boys who were hanging around the street took to their heels at the sight of a police van. A shop owner close to the club who was talking to our correspondent hurriedly strapped her baby on her back and advised our correspondent to leave as fast as possible for safety.

A police source at the Divisional Headquarters’ Annex in Lagos, also known as Lion Building, confirmed the arrest to SaharaReporters.

“The case in not under the division, it is the area command handling it,” he said. He said those left in their custody were likely be charged with public nuisance.  The DPO of the station said she was not the right person to comment on the issue.