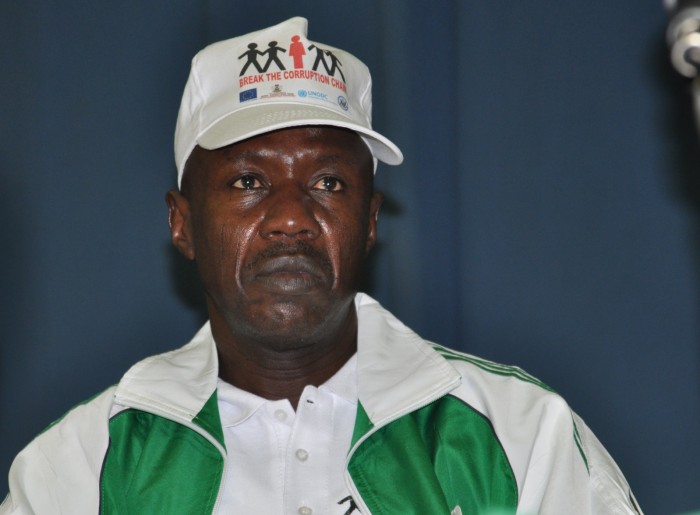 Ibrahim Magu, the acting chairman of the Economic and Financial Crimes Commission, EFCC, has been rejected by the Nigerian Senate.

The Senate formally declined confirmation of his nomination for the position of the chairman of the anti-graft agency on Thursday, December 15, 2016 siting a negative security report from the country’s secret police.

The spokesperson for the upper legislative chamber, Aliyu Abdullahi, revealed this on Thursday afternoon after the senators emerged from a closed-door meeting where Mr. Magu’s confirmation was discussed. He was slated to be screen today.

“The Senate wishes to inform the public that based on available security report, the Senate cannot proceed with the confirmation of Ibrahim Magu as chairman of the Economic and Financial Crimes Commission,” Abdullahi said.

“The nomination of Ibrahim Magu is hereby rejected and has been returned to the President for further action.”

President Muhammadu Buhari sent a letter to the Senate in July 2016 requesting that Ibrahim Magu, an assistant commissioner of police, be confirmed as the chairman of the EFCC.

The letter, also sought the confirmation of Ndasule Moses, Lawan Mamman, Galadanci Imam, and Adeleke Rafiu as members of the commission.

Ibrahim Magu was appointed to replace the former ECFF chairman, Ibrahim Lamorde, in an acting capacity in November 2015, after Lamorde was fired by President Muhammadu Buhari.

Under Magu, the public image of the agency as a crime fighter, was tarnished after series of unlawful actions by the EFCC, disobedience to court orders, and gross violation of human rights of Nigerians.

Magu politicized his position and became known as the “hatchet man” for President Buhari and the All Progressives Congress.

Contestants Debate questions: How well do you know Bayelsa?

See the faces to wrestle for Miss Bayelsa 2016 crown