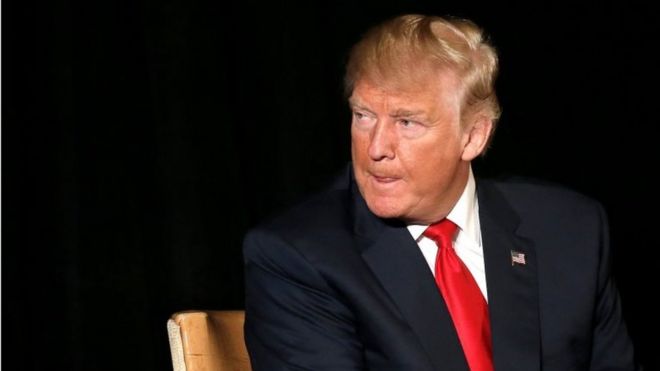 Prosecutors issued a “notice of violation” after determining the foundation had no proper registration.

The notice directs the Trump foundation to “immediately cease soliciting contributions or engaging in other fundraising activities in New York”.

The foundation has relied on donations from others since 2008, records show.

James Sheehan, head of the attorney general’s charities bureau, sent the letter to the foundation on Friday, according to a copy provided by press office of state Attorney General Eric Schneiderman.

The foundation had neglected to register under article 7A of New York’s Executive Law, which is required for any charity soliciting more than $25,000 (£19,440) a year.

“While we remain very concerned about the political motives behind AG Schneiderman’s investigation, the Trump Foundation nevertheless intends to co-operate fully with the investigation,” Hope Hicks, Mr Trump’s spokeswoman, said in a statement.

“Because this is an ongoing legal matter, the Trump Foundation will not comment further at this time.”

The letter directed the foundation to provide the legal documents required of charities that solicit donations from the public, including audited financial statements and annual financial reports within 15 days.

“The failure immediately to discontinue solicitation and to file information and reports” with the charities bureaus “shall be deemed a continuing fraud upon the people of the state of New York”, Mr Sheehan wrote.

The announcement comes after the New York Times reported he paid no taxes for nearly two decades having declared losses approaching $1bn, according to three pages of his 1995 tax returns.

Mr Trump’s campaign has refused to confirm or deny the report, but said the filing was “illegally obtained”.

Democratic rival Hillary Clinton told supporters in Toledo, Ohio: “While millions of American families – including mine and yours – were working hard paying our fair share, it seems he was contributing nothing.

“Trump represents the same rigged system that he claims he’s going to change.”

She said this was like “letting the fox guard the henhouse”.

The former secretary of state also released a new campaign video on Monday, calling Mr Trump “a business failure who has gotten rich at your expense”.

Nigeria, Turkey may clash over Nigerian students’ arrest and deportation

Love and Sex: How to help your man through sexual disinterest