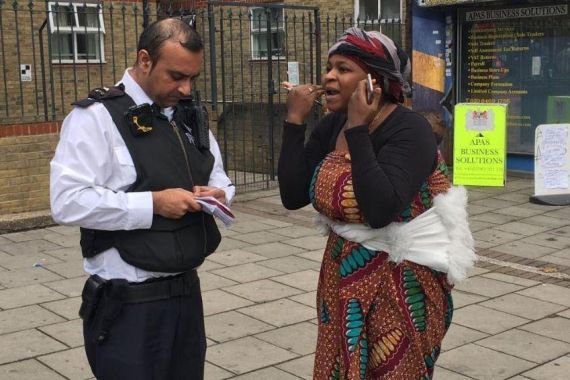 Two black mothers, including one with a baby intervened when thugs were about to stab a teenager in a busy shopping street. The niece and her aunt took action when two youths with huge knives chased two other boys through New Cross in south London. The aunt picked up a cafe chair and lunged at one of the knifemen with all her strength, knocking him off balance as he was about to attack one of the boys.

Witnesses praised the two women, saying they had saved the boy’s life. The aftermath was captured by BBC London, who filmed the women telling police what had happened. The niece, still carrying her baby, told officers:

“I started shouting and the next thing I saw was my auntie, who’d got one of the cafe chairs. She was trying to stop them.” Her aunt added: “We just saw it like ‘this is going to be a bloodshed if we don’t get tough’. They had two massive knives. “We just tried to prevent somebody from ending up in the hospital or in the mortuary. And as a mother I didn’t think about anything else, Ijust thought that this needed to be stopped”

Another witness, Lena Gale told the Standard : “One of the two attackers was carrying the biggest knife I have ever seen, it was huge. I told the driver to pull over and started screaming for people to help. One of the boys being chased tripped and fell over. He looked like he was done for, doubled up on the floor. They were going to kill him. But this woman stepped in and grabbed a cafe chair and hit the boy with the knife as hard as she could. The guy stopped in his tracks and ran off.” When officers arrived the scene, the alleged attackers and their victims had fled. The women have been hailed as heroes by online users.