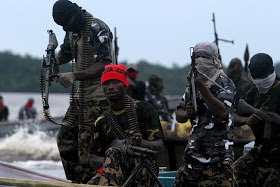 This action is a signature to the over dramatization of the so-called dialogue and negotiation process on the side of President Muhammadu Buhari and his government. Since, the cessation of hostilities and the commitment of the PAN Niger Delta Elders and stakeholders team, the Nigerian government and her agents are turning the expectations of the Niger Delta to shameful scenes obtainable in Nollywood acts and as well intimidations, blackmails and continuous profiling of Niger Delta sons and daughters.

This is only a wake up call; we may not have other way to say it better. We are still in favour of the dialogue and negotiations but we are warning against ” the peace of our time!

We want the peace with honour”. We will resist all actions undermining the ceasefire from side of the government and it security agents/ agencies. The world is watching, time is running against the Nigerian state; while we were promised that the concerns of Niger Delta will be addresses once a truce is declared, the activities of the government and her agents are not assuring enough, there has been no progress and no breakthrough.

We cannot be continuously fooled, the government cannot justify the indiscriminate targeting of Niger Delta youths while glorifying on these victimization of law abiding citizens of the region

Manchester United on a revenge and demolition mission, check out