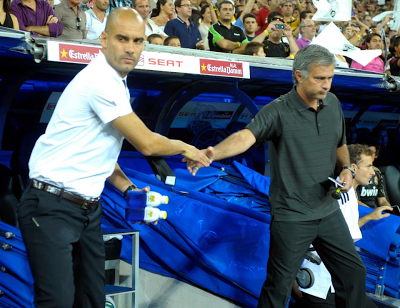 A video from 1997 has resurfaced showing Pep Guardiola and Jose Mourinho now arch-enemies- sharing a tender, loving embrace in the center of the Feijenoord Stadion in Rotterdam, Holland at the end of the Cup Winners’ Cup Final, which saw Barcelona run out 1-0 winners against Paris Saint-Germain. Mourinho was at that time a young translator/coach under Sir Bobby Robson while a young Pep Guardiola bossed things in the center of midfield.

Now ahead of the Manchester derby, Mourinho has been priced by bookmakers at 8/1 to be sent off this weekend, such is the hatred/rivalry between the pair. But from this video, it wasn’t always like this! Watch the video after

Strictly Come Dancing 's Laura Whitmore is being put through her paces by her dance partner Giovanni Pernice.