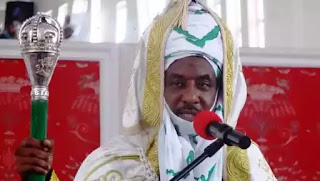 One character possessed by Femi Fani Kayode is his sound and vocal speaking and never been intimidated by anyone. He is absolute outspoken.

In fact the emir of Kano, Muhammadu Sanusi II, has come under attack from Fani Kayode for blaming the immediate past president, Goodluck Jonathan, for not supporting the independence of a Palestinian state during his administration.

Emir Muhammad Sanusi II, had on Wednesday, August 10 urged the federal government under the leadership of President Muhammadu Buhari to back the need for a free Palestinian state.

Would someone pl tell this man to just shut up. The land belongs to Israel and not Palestine. God bless Israel. https://t.co/0FiOOoFBZV

Speaking at a one-day international conference on Palestine with the theme, “Palestine question; Issues, Challenges and Actions, the former governor of the CBN said the immediate past president was to be held responsible for the failure of Palestinian state, which ought to have put an end to the Israeli occupation of Palestinian territories at the UN security council. However, former minister of aviation, Fani Kayode, reacting to Emir Sanusi’s comments via his twitter handle called on the emir to shut up, insisting that the land in contention belongs to Israel and not Palestine.

Saisia plot to defeat Denmark at the ongoing Rio Olympics