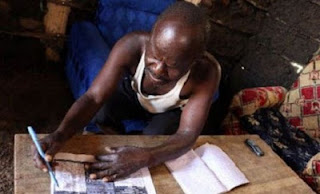 A 62yr old man named Joseph Onywera from Kisumu county, Kenya, has rejected a return offer made by his wife who dumped him, cos he couldn’t feed the family but returned after she heard he won Sh20 million (N63 million) jackpot.. The now former farmer in Kapiyo in Kano, won the colossal amount early June from Betway Company after he correctly predicted the outcome of 13 football matches in the English Premier League.
The gambling addict has been living with his son. His first wife, Truphena, died in 1996. The second wife, Ms Anyango, left him in 2010 following a disagreement over money.

But hardly a month after he hit the jackpot, she came back knocking.

“I saw her come into my compound and I wondered. She had told me to my face that she would only return after I die. So I told her to go away since I am still alive,” said Mr Onywera.

MARRIED ELSEWHERE
The Arsenal and Gor Mahia fan believes the woman, who is said to be married to a Tanzanian in Isebania, must have come back just because fortune had knocked at his door.

“Ever since she left, several incidences have happened that would attract her attention. My mother died but she did not turn up for her burial. My father also died and I had an accident, but she did not bother to check on us,” said the composed gambler.

He is looking forward to marrying another woman, who he said, stuck with him during his days of hardship.

“I am a humble rice and tomato farmer. A certain woman who respected and loved me when all I had was farming will be the one to live with me in this permanent house,” he said with a tone of finality.

TOTAL TRANSFORMATION
There is total transformation, almost overnight, for a man who could hardly imagine he would afford a car any time soon.

Mr Onywere is not only the latest millionaire in the vicinity but practically a “private developer” as some of his village mates call him.

He has bought two plots and is planning to develop another one located at the heart of the Lakeside city, Kisumu. Continue read

Violence! Women hacked by husbands for refusing to share her salary, and over custody of their child