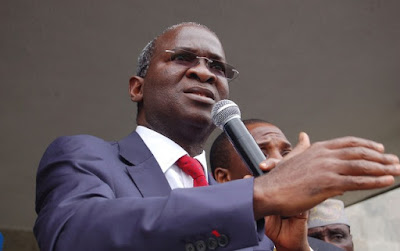 Nigerian Minister of Power, Works and Housing, Mr. Babatunde Fashola, has said there is no going back on the decision of the Federal Government to ban the importation of 10 building materials into the country, to enable the growth of locally-produced ones.

He identified the affected materials to include doors, windows, tiles, ceilings, plumbing accessories, cables, paint and iron, noting that the only way Nigerians could help to reflate and stimulate the economy back to growth was for people to look inwards for satisfaction of their needs.

Speaking at the fifth National Council on Land, Housing and Urban Development, themed, ‘Building Adequate Capacity of Professionals, Artisans and Tradesmen in the Built Environment,’ Fashola said all the benefits envisaged in this year’s budget, such as inclusion and employment, would not happen if the people for whom the budget was made, abdicated the responsibility for building to foreigners or prefer foreign goods to locally made ones.

The Federal Government had in March after a two-day retreat held by the National Economic Council proposed the stoppage of the importation of tiles, Bitumen/Asphalt and others.

Meanwhile, a statement on Friday by the Special Adviser to the Minister on Communications, Mr. Hakeem Bello, quoted Fashola as saying that the ban would provide opportunity for the professionals, artisans and tradesmen in the built environment to show what they could do, build capacity and help to produce the “hundreds of thousands of doors, windows, roofing materials, gallons of paints, plumbing materials and other accessories that would be required by Nigerians.”

On the road map for Housing, Fashola, said progress had been made and that steps were being taken to complete the remaining processes, noting that the government was being meticulous in its planning to ensure that the National Housing Programme meets national acceptability.”