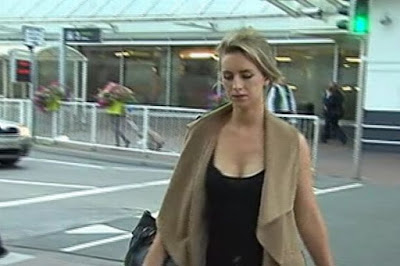 Whichever thing you want to do think about it before embarking on it, else it either mar your future or make it. Think twice before acting.
Convicted Peru drugs mule Michaella McCollum has arrived home after flying back to Ireland from South America.

She flew into Dublin today via London after being released from prison earlier this year.

The 23-year-old was freed on parole after serving more than two years in South American jails for trying to smuggle almost £1.73 million worth of cocaine from Peru to Spain, the Irish Mirror reports.

The Dungannon woman arrived into Dublin on a flight from London on Saturday evening. She had left South America 24 hours previously.

Glawegian Melissa Reid, who was also with her when they were arrested at Lima Airport in August 2013, arrived back to Scotland in June.

McCollum was released on parole in March this year after serving less than half her six-year, eight-month sentence.

In her only interview since she left prison, she told RTE: “I could have potentially killed a lot of people, not directly but I could have caused a lot of harm to people.

“I don’t think that guilt is ever going to go away because how could I forgive myself for doing that.

“If the drugs had of got back what could have happened, I probably would have had a lot of blood on my hands ..The amount of families that would have ruined.. I did that, I caused destruction to society and who am I to be able to do that?”

When she arrived home in Scotland, Reid admitted she knew what she was doing.

She told of her regret and how she was embarrassed but also that she would no longer deny her crimes.

She told the Mail on Sunday: “I knew what I was doing. I made a conscious decision to do it and no one forced me.

“I was scared and made up a story thinking I would be believed.”
Mirror