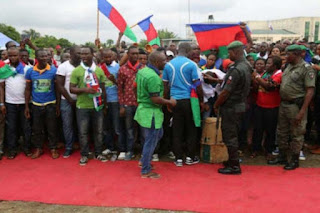 Stories emerging between Ijaw people and Oduduwa
Due to the alleged ultimatum given by the Reformed Odua Peoples Congress, ROPC to Ijaw indigenes who live in Lagos and Ogun states to leave these states, a lot of Ijaws have started relocating to the South South for fear of being attacked. The ultimatum was allegedly given to the Ijaws due to attacks by unknown gunmen in parts of Lagos and Ogun states
Spokesperson of the Ijaw Youth Council, IYC, Eric Omare, who confirmed the developments to Vanguard said:
“At as Sunday morning (yesterday), information at our disposal indicates that some Ijaw people resident in Lagos and Ogun states, for fear of attack, are already relocating from their places of residence to the South-South.”
However, the IYC, however, said that the ROPC members and the leaders of the Yoruba nation should allow the police do their jobs by apprehending criminals responsible for the Ogun and Lagos attacks.

In regards to the situation at Kaiama and the fact that people are relocating due to the fear of the Adaka Boro Avengers, Omare said:
“We call on residents of Kaiama town to be calm and go about their normal activities. There is no plan by the Ijaw people to declare a republic and the threat by Adaka Boro Avengers should be disregarded.
“We wish to warn groups and individuals not to further expose Ijaw and Niger Delta communities to unnecessary tension and danger. They should not abuse modern means of information technology to the detriment of our communities by issuing unnecessary threats and ultimatums.
“We call on security agencies to stop forthwith the unnecessary threats and attacks on Ijaw and other Niger Delta communities because of threats by faceless groups. They should check issues of security with the leadership of Ijaw nation instead of threatening or attacking innocent communities and people,” he added.

Aww! Amber Rose looks unrecognisable as she flaunts her acres of cleavage

Aww! What Beyonce Mum Did May Shock You, Watch Video