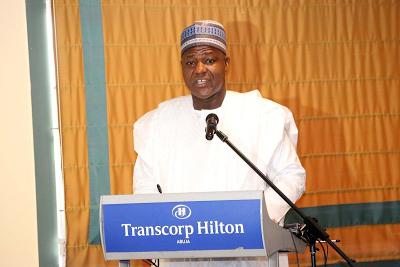 Budget Padding In The national Assembly
Speaker of the House of Representatives, Yakubu Dogara, yesterday said those who are calling for his prosecution following allegations of budget padding leveled against him by the sacked chairman of the House of Representatives Committee on Appropriation, Abdulmumin Jibrin, are ignorant of legislative laws. Speaking at a civil society meeting in Abuja yesterday August 11th, Dogara said legislators are protected by the constitution when they are seen to be carrying out their legislative function. Dogara last week stated that budget padding isn’t an offense.

“It doesn’t even make sense and they have forgotten about Section 30 of the Legislative Houses (Powers and Privileges) Act, and others which says most of the things we do in the National Assembly are privileged. They cannot be grounds for any investigation on the procedure or proceedings to commence against a member of parliament, either the Speaker or the President of the Senate, once they are done in the exercise of their proper functions. The Constitution talks about the estimates of revenue and expenditure to be prepared and laid before the National Assembly.

The constitution did not mention the word budget. And the reason is very simple. Budget is a law. Going by very pedestrian understanding of law which even a part one law student can tell is that the functions of government is such that the legislature makes the law, executive implements and the judiciary interprets the law. The budget being a law, therefore, means it is only the parliament that can make it because it is a law. And I challenge all of us members the media and civil society organisations to look at our law and tell me where it is written that the president can make a budget” he said